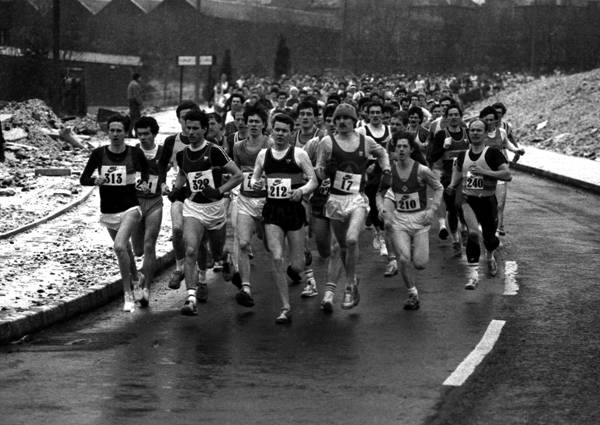 The Nigel Barge Road Race was first run in 1943 and commemorates Nigel Barge who was killed in action in Dunkirk in World War II.   According to the Maryhill Harriers website, he was an outstanding officer who was trained as a Royal Engineer.   He came top of his class at Woolwich and had helped to prepare and map defences around Dunkirk.   He also assisted in the repairing of small craft to ensure the debarkation of his comrades.   He was also a licensed pilot a a keen athlete.    His father was Kenneth Barge of the Bengal Lancers and a member of the Committee of Maryhill Harriers.   It is important that these events continue in some shape or form although the race can no longer be run on the traditional trail round Maryhill and Canniesburn Toll.

The race has had a long and formidable history in which every top endurance runner in Scotland took part at one time or another and many really great races run in it.    It appears in many of the profiles on this website as a significant race.   When I joined Clydesdale Harriers in 1957 it was the first road race of the New Year and a ‘must run’ event.   On one occasion Springburn altered the date of the Springburn Cup race to the first Saturday in the New Year but when I asked a Scottish internationalist which he was going to do, he looked at me with astonishment and said “The Barge of course – it’s the classic!”    The first race was held in January 1943 and it was covered as follows in ‘The Glasgow Herald’ of 4th January, 1943,:

T Gibson of Bellahouston Harriers won the Nigel Barge Memorial Trophy five miles road race from Maryhill on Saturday in the fine time of 24:56.   The contest was keenly fought out, both for the individual and team tests, T Gibson early on got to the front, hotly challenged by JE Farrell, Maryhill, and G Burdett, the Navy and Shettleston Harriers.   It was only over the last mile that Gibson succeeded in drawing clear of his rivals to win by 15 yards.   Burdett did well to reach third place, a similar distance behind Farrell.   Garscube (R Hulgrew, A Donnett and A Hay) aggregated 18 points in the team race to beat Maryhill (JE Farrell, J Hoskins and  R McPherson) by one point, Shettleston Harriers being third with 26 points.”   A short report for a significant event in Scottish road running.

As for the race itself, it was always held on the first Saturday of the New Year unless that was actually the 1st January.  The year always started with the Beith Cross-Country on the first day of the New Year and the Bargee on the Saturday.   It was a time of shaking more hands in a shorter time than any of us ever experienced away from the race: as Douglas MacDonald says, it was always a genuine atmosphere of inter-club bonhomie.    As the McAndrew Relay was the traditional start to the winter season in October, so the Nigel Barge was the traditional start to the year with many turning up for the first time of the season just to see old friends and swap stories.   Douglas talks of going to the January sales with his Dad, Ronnie MacDonald, to buy the prizes for the race.  Ronnie confirms that – there were often times when the shop was told they were prizes for a race and an extra discount was given.    While on the subject of prizes the race was always quite generous in what was on offer:   for instance in the 1990 race, the handbill offered £2000 in prizes.   These were for the first four finishers, the first four teams, the first six ladies, the first 2 Juniors, the first O40, O45, O50, O55, O60, the first veteran team, the first Ladies team and a special award for the first runner over the canal bridge at the foot of the Cleveden Road hill!    Incidentally when the race was denied a permit because of a mix-up at the SAAA Offices, they had to run it as a club race with guests.   Many of the top names raced under false names and a future president of the SCCU had to be reminded of his name when he won a spot prize and failed to go up to collect it.    That was also the only year when a Ladies team (Glasgow LAC) won the overall team race!!!    In short, the Barge always had good prizes and usually many of them: it was possibly the first race to offer a ‘prime’ – to the first runner at the top of the hill – and there were also spot prizes with a nasty rumour that they picked somebody that they wanted to give a prize to and then every tenth person thereafter got something as well – as a ‘spot prize’.  All the very best runners in the country used to contest the race and then as the sport gradually burgeoned, many a new race was organised as a ‘start of the year’ event: Round the Houses races sprung up in imitation of the original held in Brazil, novelty races each with its own brand new tradition such as the race at Mountain Ash in Wales with  the ‘mystery runner’ – and they all wanted to invite very good athletes to compete.   These things had to affect the Nigel Barge and they did although while it was on the traditional course it remained a high quality event.   How about the actual race itself? 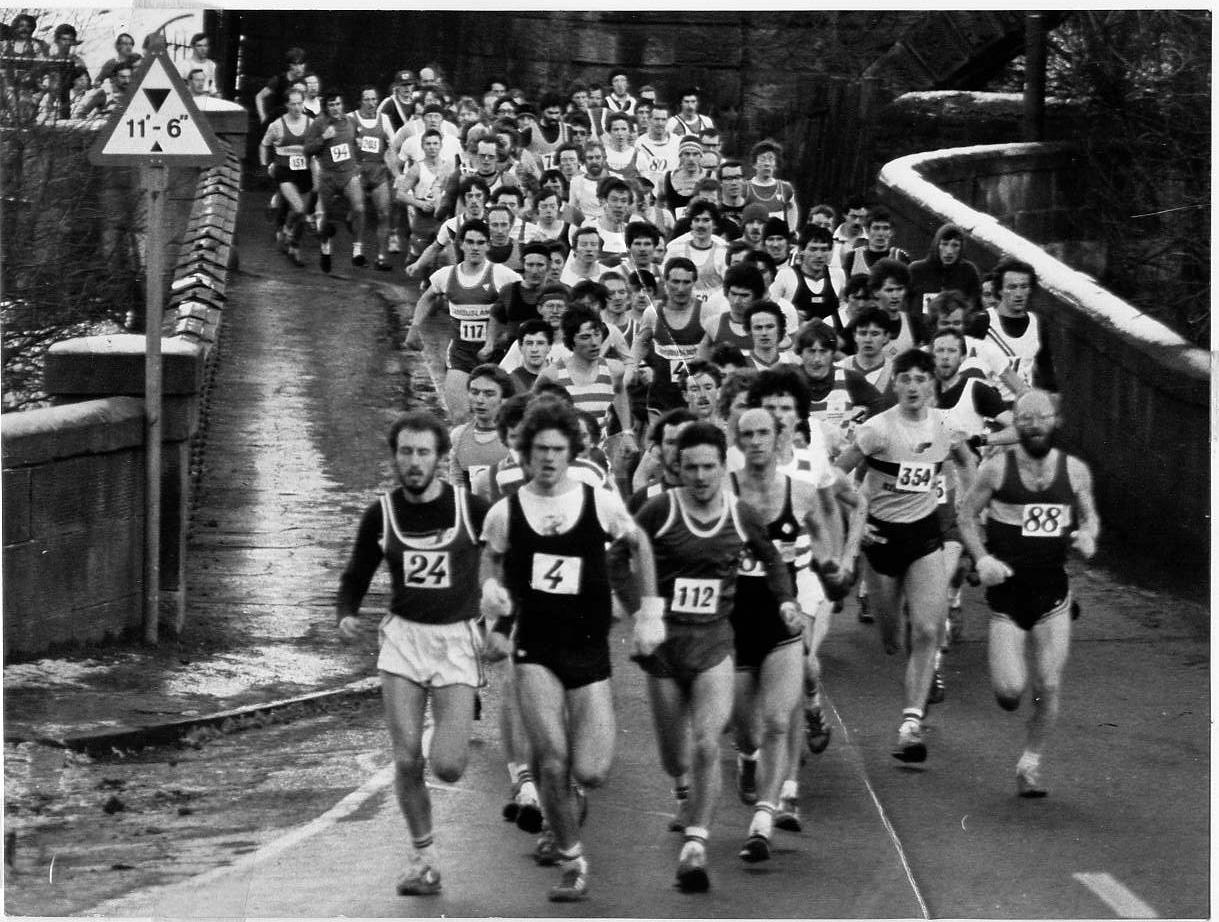 The race started in Kelvindale Road and headed down a steepish slope until it crossed the bridge over the Kelvin before going up the very steep and long hill to Cleveden Road where the runners turned right into Cleveden Road.   This meant plunging down another very steep hill to cross the bridge over the Forth and Clyde Canal and turning left onto Temple Road.    A half mile or so of this flat running before turning right on to the demanding Switchback Road.    Along this road with its up-and-down going to Canniesburn Toll and right again along the long drag of Maryhill Road ending in a run along a very busy wee part of the road past people doing their Saturday shopping, under the bridge under the Canal at Lochend Road before turning right into Kelvindale Road and the long run in to the finish.    If any runner active at present thinks he has run a hard hilly course, well he hasn’t tackled this one.    Do it in your own on a quiet Sunday morning and wonder at the fortitude of your forebears!

If you were quick off the mark, it was possible to get a good picture of yourself crossing the Kelvin Bridge where the course had to narrow and the runners bunch so the man in front had many famous names behind him and many a man has tried to do just that.   See the picture above.    Alastair Douglas was a supporter of the race and has this to say about it.

“The Nigel Barge was another very high standard race.   I however always felt it was just below the Uni race in class.   Nat and one or two others often did not run as it clashed with either Belfast or one of the Continental International Cross-Country Races.   I missed it on a few occasions due to running at Belfast or on one occasion at the Madrid San Silvester.   However, one race that have seen the result for was truly outstanding in standard.   It was in 1970 – obviously before my time.   In the race were Lachie Stewart and Ian McCafferty.   They were to prove themselves as world class athletes a few months later at the Edinburgh Commonwealth Games.   However astonishingly neither of them won the race that year – that honour going to a young Ronnie McDonald.

Some of the course was similar to the Uni race except that you went down Cleveden Hill.   It was also even more dangerous as the race went right through Canniesburn Toll, often in icy conditions.    The first time I ran in it was 1980.   I remember Jim Brown followed by Jim Dingwall and Gordon Rimmer flying down Bearsden Road instead of turning into Maryhill Road.   I managed to finish first junior that year.   The three that had gone the wrong way, managed to catch and beat me.

The highlights for me were finishing second to (a now not so young) Ronnie McDonald in 1982 and winning in 1988 and 1990.   The 1988 race was a bit of an anti-climax.   The field was diluted due to a mix-up in the calendar and it clashing with the Springburn Cup.   However my win in 1990 goes down as one of my best ever victories.   A novelty in this race was the King of the Mountains prize.   This was a bottle of whisky for the runner who reached the telephone box at the top of Kelvindale Road first.   Again Dougie McDonald – along with Ian Archibald – was the brains behind this one.”

The standard of the race was always high, and never more so than in the 1970’s and 80’s.  From my own diary I have the detailed result for the 1970 race and the first 50 are reproduced here.

These are shown to such a depth to illustrate the quality and competitive nature of the race – have a look at how close the fast-travelling 8th to 12th places were, or 26 to 29 or 40 to 42.   You wilso note the mix of experienced runners, the newer junior runners and those in their prime at the time of the race.   It was a race.

For some reason, the ‘Scots Athlete’ did not cover the race every year, indeed the first report on the Nigel Barge in ‘The Scots Athlete’ was for 1948 and the winner was Andrew Forbes of VPAAC from Adam MacLean of Bellahouston Harriers and there are some excellent pictures in the issue of February 1948.