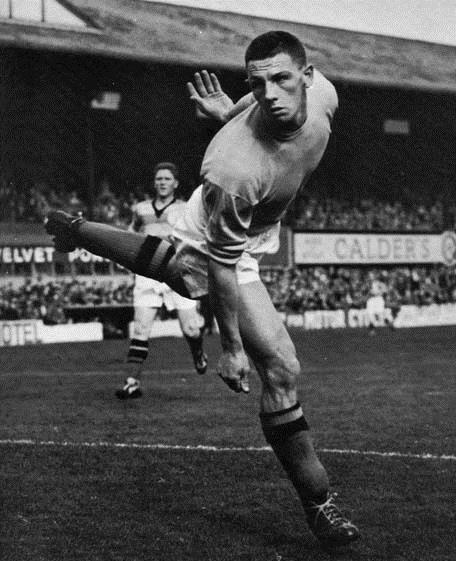 John’s career in professional athletics was not marked by a narrow specialism.   When I spoke to one of his contemporaries on the circuit he remembered John well.  Where many confine themselves to the heavy events and others do the jumps, sprints or endurance events, John could perform well in them all – maybe not in the endurance races though.   He could do a good long jump, he was a high jumper and hurdler, and in addition  he was good at the throws.   His last season as an amateur was summer 1958.  He remembers competing in the Sports of 1958 where he won the shot putt and was rewarded with a Parker-Knoll armchair which was better than Hugh Barrow’s transistor radio but much harder to fit into the family car.   He also took part in the high jump immediately and his opening jump was 5’11” which was not good enough for a place in the event.   He did however get a second in the pole vault.    These were the days of landing in flat sand in the ‘jumps for height’ but at Ibrox the sand was piled high .   John had seen the Walt Davis/Alan Paterson duel in 1952 and had been roped in by Fraser Riach to help retrieve the javelin in the floodlit meeting.   Unfortunately the 1958 Sports was his only competition because he turned professional at the end of 1958 to compete on the Highland Games circuit.   He became a professional at the end of summer 1958.

The transition from football is described – Davidson again:

That led Freebairn to the Highland Games, the only form of professional athletics then available. Over the next 25 years or so he went on to have a highly successful Games career, mastering the arts of the heavy events – caber tossing, Scots hammer throwing and putting the shot. He also shone in running, jumping and pole-vaulting. Being an all-rounder, Freebairn regularly chalked up more than ten events per day. He would flit from the throwing zone, removing his kilt as he did so, to the jumping area, then back again with kilt restored. Competition at the time was stiff, with Bill Anderson and Olympic shot putter Arthur Rowe standout “heavies” and the MacBeath brothers and John Robertson in the light events.

He enjoyed competing successfully in front of the royal family at Braemar, but also venues such as Pitlochry, Portree and Glenisla. During the Glasgow Fair fortnight, there were Games every day from Dunbeath in Caithness to Luss on Loch Lomond.   His highest winnings in one afternoon in the 60s were £40, equivalent to about £500 in today’s terms.

There was danger also. Once at Oban Games as he bent over, back facing the hammer throw, a flying 22lb hammer hit him flush on the rear end. Ewen Cameron, of Lochearnhead, the famous Games figure, insisted he have a ‘restorative’ dram – “the worst thing I could have done” – but, minutes later, he won the high jump.   They made them differently then.

Away from the domestic circuit, he competed in Games in Australia, Indonesia, France, Germany and Sweden. Latterly, he has competed in veterans’ athletics, winning a clutch of British titles as well as being involved in coaching at national level. He continues to compete and will do so as long as he is able.

He looks back on a sporting career that gave him a lot of satisfaction as well as some regrets. In particular, he regrets being denied the opportunity to represent Britain in the decathlon. It seems anomalous and unfair that, because he was also a talented footballer, access to the higher levels of amateur athletics should have been blocked. That said, he does think that if he had his time over again he would concentrate on football – “with the money they make nowadays!” he laughs.”

He was a very good competitor in all field events but more successful in the jumps – or the Light Athletic events as they are known on the professional circuit.   He had to be as the standard in the heavy events was so high with Bill Anderson towering over the others in terms of his performances.   There were English amateur internationalists who competed for a couple of years and were also of a high calibre – Arthur Rowe in the 60’s had some great duels with Bill Anderson and they drove each other on to some prodigious achievements, John Savidge of the Royal Navy and another Olympian, and the legendary Geoff Capes for example.    John won his prizes in these events too but most of his victories were in the other field events.  In the pro events, there were usually no landing areas for high jump or pole vault: the competitors were landing on grass..   And the vault was with an aluminium pole with a spike in the end.   Remember that when you see the heights reached by the winners in the Games.   He had competed in some highland games when a student (in 1958 he won the high jump at the Strathallan Gathering).   His versatility was clear right from the start of his pro career- at Braemar in 1962 he was third in the hurdles race, second in the long jump and won the high jump.   He won the SHGA Light Athletics championship in 1966 with victories in Pitlochry, Crieff, Aboyne and Auchterarder among others but we should look at his victories over a few seasons.  His talents can best be seen when we look at his Games career year by year.   Victories in the first couple of years were frequent but as noted, it was in 1966 that he won many more events and won the championship. 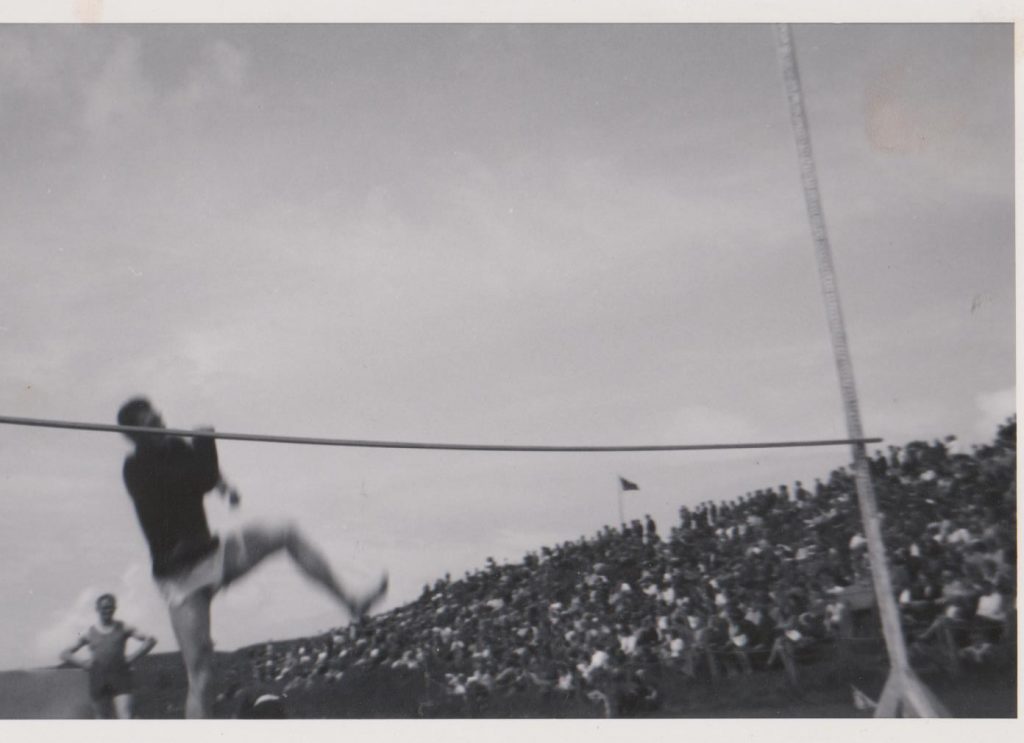 The ** marker indicates that the event was won by W McLellan who was John’s main rival at many games and he won the 1967 title with both he amd John tieing for the championship in 1968.   These are only the events that he won – there were times when a new athlete appeared on the scene and took first prize – eg at Aboyne, Ian Ward GB International pole vaulter and one of the men responsible for introducing the glass fibre pole to the country, won the event with a height of 12′ 0″.   The detailed results for other seasons will be recorded on a separate page.    It would be a mistake to suppose however that John was not a successful competitor in the throws events.   The standard was very high with the names of Rowe and Anderson dominating all the throws in the 1960’s    Have a look at this.

And if you look at the bottom of this extract from the SGA handbook (no date), then you note that he was also a fair-to-middling wrestler! 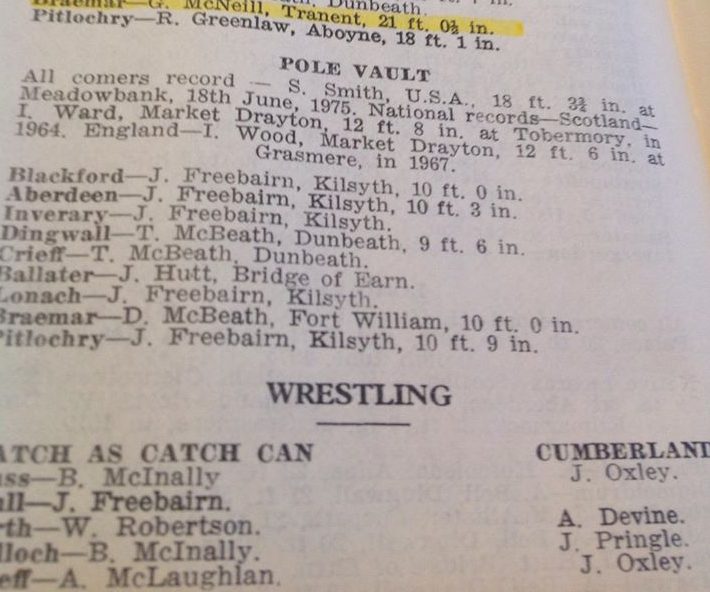 He seemed to like the Aberdeen circuit, which doesn’t appear on the last table apart from the trips to the Lonach Gathering travelling there year after year.   A few examples from the 1970’s –

What do we see from the above: First off, note the distances covered to get to the events: some athletes tended to compete only in the Borders and Lakes, some kept themselves to Fife and the Central Belt and so on, but John was one of the few who travelled the length and breadth of the country.   The West Coast was represented by the Balloch, Luss, Oban, Mallaig and Caol Games, the North East by Braemar, Aberdeen and Aboyne, and the East Central Games were covered by Alva, Auchterarder, Pitlochry and Blackford.   Nowhere was off limits.   John was also a regular contender for year end honours – for instance, in 1966 he won the Light Athletic Field Events championship, in 1968 he tied for the same title with W McLellan.   In addition there were invariably Games where he was second or third in several events without actually winning one.

It is also of interest to note that he won long jump and triple jump events on the circuit taking off from dodgy surfaces into sand.  Rules for these light field events are below. taken from the official Games Association handbook.   As a veteran athlete he was ranked year after year in event after event but seemed to shy away from both these events. 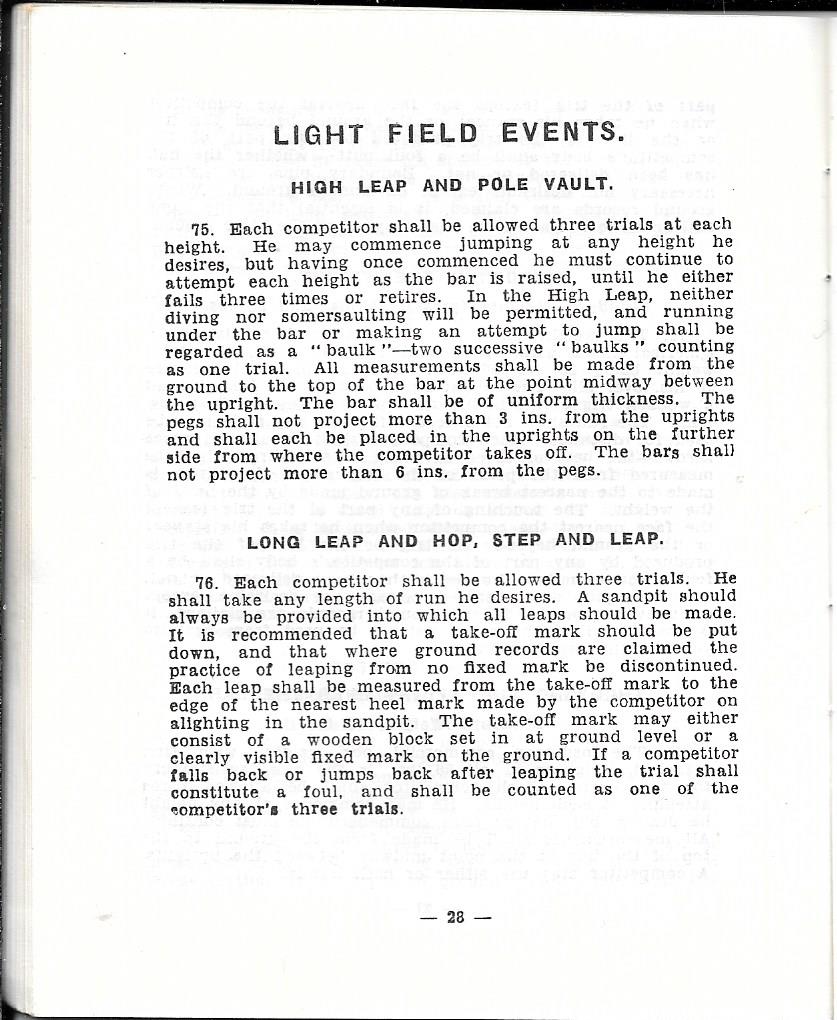 What did his contemporaries among the profession athletes think of John?  A story of John at the Games comes from Alastair MacNeill’s reminiscences of the Games at the http://www.aniodhlann.org.uk/wp-content/uploads/2017.70.2.pdf website:

“Among those I got to know well was former Partick Thistle goalkeeper, John Freebairn.   I had seen him many times at Firhill when, as a student, I had gone to watch fellow Tirisdeach, Johnny MacKenzie, playing for Thistle. Incidentally, the latter is the only fluent Gaelic speaker to have played for Scotland. John Freebairn often nearly caused Thistle fans to suffer heart attacks with his habit of coming well out of his goal area to make a  clearance.   On one occasion at Inverary a young newcomer appeared on the scene in the long jump. At one point during the event my teacher’s brain must have taken over and I pointed out something he could do to improve his performance. John came up to me and said quietly, “I don’t mind you coaching, but don’t do it during the actual competition”.

The following cutting is of the Strathmiglo Games in 1973 where John won several prizes. 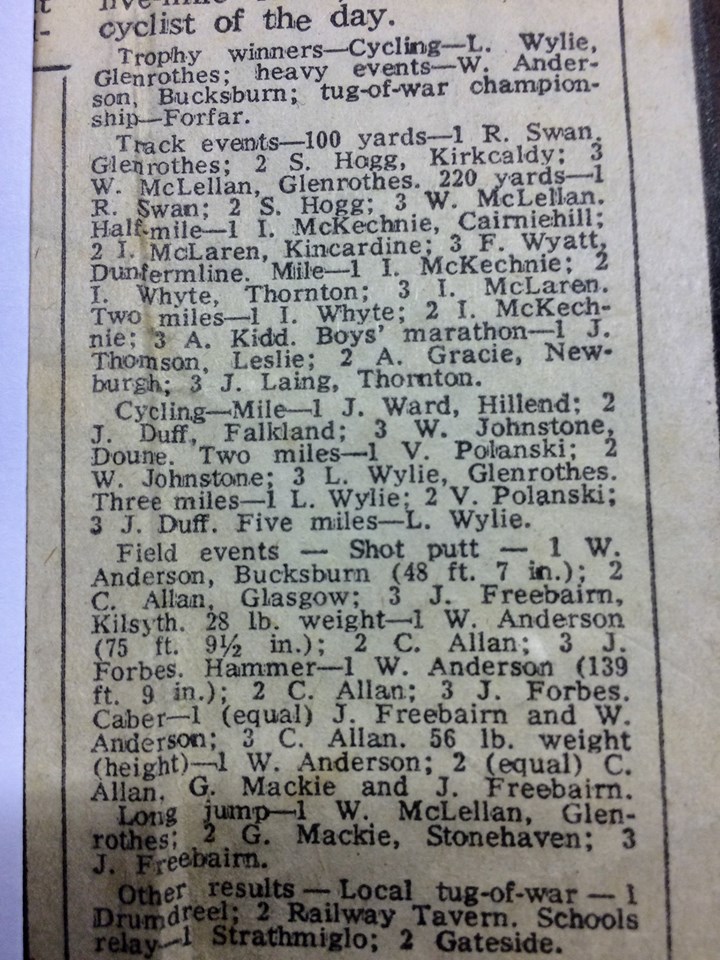 A first, a second and two thirds – the opposition was of a good class – the great Bill Anderson tied with John for the caber toss and Charlie Allan (throws) and Willie McLellan in the jumps were also top men.   A former National Coach for Scotland used to have a list of sports and athletic events which he put up and then asked which were endurance events.  Regardless of the individual events, John must have been an endurance athlete to compete as often as he did at these meetings.   The four events for which he won money were not the only events he competed in that day, and he had won hurdles races as well as all the jumping events on occasion – one competitor comments on another page about him putting on his kilt for the throws, then taking it off for the running and jumping events all afternoon.   He was quite the endurance athlete too.