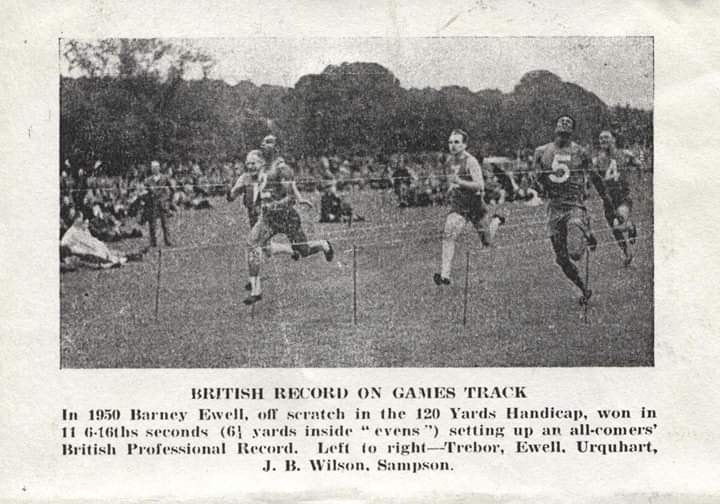 “The  Jedburgh Border Games  –  The Blue Riband Meeting of Scotland’s Summer Circuit”.    So says the banner at the head of the excellent Jeburgh Games website and it certainly has a very good claim to the title.   Their brief description of the origins of the meeting read:

The first person to moot the idea of having an athletic games event was probably Mr Thomas Oliver, sawyer of Jedburgh. While chatting with ex-provost Miller in the High Street one evening in 1852, he remarked to the effect that there may be an opportunity to have a Games here next year. Both were enthusiastic admirers of athletics and accustomed to conducting such sports during the summer evenings in the town. They both managed to get other kindred spirits interested in the matter, and were not long in putting the idea into a business like form. Contests held almost nightly during the summer evenings, at the Anna and at Abbey Bridge End Green, adjoining Barton’s Ropery may be said to have been the immediate precursors of the Border Games. Sums of up to sixpence could be won by youths testing their running prowess in those early days, and the modest prizes collected from a willing crowd of spectators, were as hotly contested then, as the much prized cups and other trophies presented to the most successful competitors nowadays. The first ‘Jethart Games’ were held on Friday 12th August 1853 to mark the coming of age of the 8th Marquis of Lothian. The original, memorandum quotes, “acting under a desire to give the greatest possible amusement in the least harmful manner, the commitee of Management for the occasion resolved to celebrate the majority of the Marquis of Lothian by Border Games”. Early records recall that a procession left the Market Place for the Dunion Games field where Peggy Lockie set up her krame at the Toonheid selling gingerbread horses. The band was made up for the occasion, and consisted of Thomas Main, shopkeeper (bugler), James Hopkirk, painter (cornet), James Turnbull, tailor (trombone) James Balmer, skinner (cornopean), Wm. Aitchison, tailor, and Walter Ferguson, shoemaker (drummers), James Cook, High Street (fiddler).”

There is more but for the full story you should visit the website where the story from 1853 to the present day is detailed in nine chronologically ordered chapters.   It is probably the best set out and most detailed description of a meeting on the internet and well worth a visit. 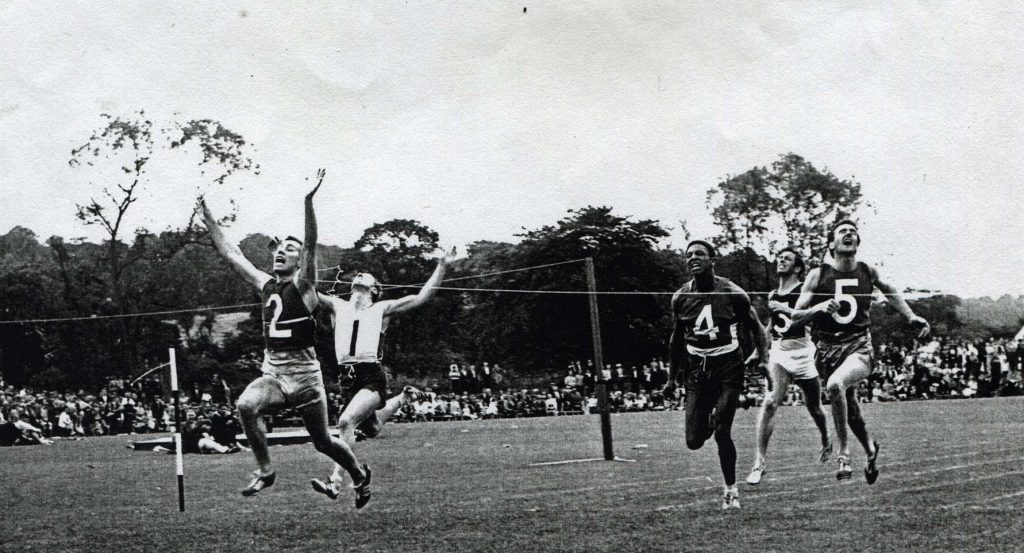 The meeting is a popular one and has had many close and exciting races with all the top class athletes performing there.   The Jedsprint is the main attraction among many and the story behind it is an interesting one.   This description is from the official website:

“Although there was no formal Jedforest Sprint during the early years of the 1850’s and 60’s, prizes were already being donated to the Games from Jedburgh exiles who had emigrated and found wealth and prosperity overseas in the Dominions and in the Americas. The origin of the Jedforest Sprint was a flat handicap open race of 150 yards, introduced to the Games events as the Glasgow Cup in 1871. The handsome purse for the winner then stood at £3, and was donated by Jedburgh lads working on the shipyards of the Clyde, who were probably earning a comfortable wage at that time. This event continued for a number of years with the prize increasing to £7 for the winner at the turn of the century, when it became known as the Glasgow Prize, after the distance was reduced to 120 yards during 1887. At the Games Jubilee Year of 1903, this sprint became known as The Tyneside Prize, a title that had in previous years, been associated with a wrestling event. Once again, the purse was provided by Jedburgh lads working in the shipyards of Tyneside and Sunderland. For the Games of 1911 the event was advertised as The Coronation Handicap with the prize money then increased to £10 for the winner. The following year of 1912 heralded the first use of the title, The Jedforest Handicap, which continued until the Games were abandoned during the Great War. The next gathering in the year 1919 saw the event hailed as the Victory Handicap, and from 1920 was continued until present as the Jedforest Handicap, with the prize money during that particular year being reduced to 140 shillings. The Original Glasgow Cup was finally presented as a trophy to the winner of the 90m Youths Open event in 2003, and has now been withdrawn as a competitive prize, to be viewed by all at The Castle Jail Museum in Jedburgh.”

The direct quote is important because each of the meetings has its own particular history and traditions which to a large extent dictate the individual nature and content of each meeting.   Sprinters at Jed include the great Australian Eric Cummings, Edinburgh’s Ricky Dunbar, who shaved three one-hundredths of a second off Ewell’s record in 1965, the incomparable George McNeill and, much more recently, Olympic sprinter Nick Smith from Dunfermline and there were the legends of the sport such as Dave Walker, Jimmy Bryce and JB Steede. 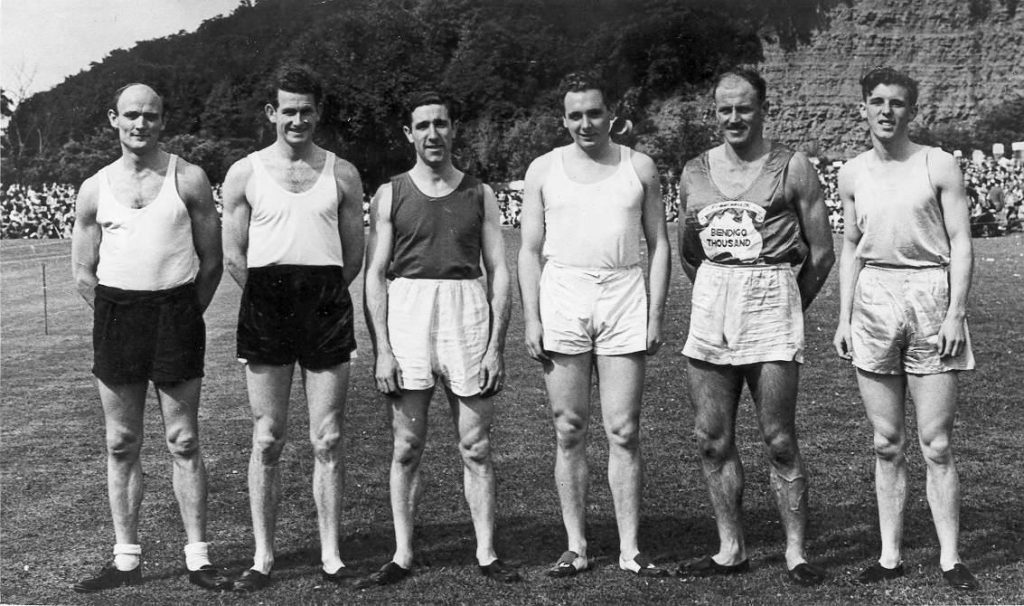 Sprint Finalists in the 1950’s

Of course the Borders is a stronghold of Scottish Rugby and naturally it has seen many take part, generally in the sprint.   British and Irish Lions to compete include Peter Dods, Colin Deans, Alan Tait and Tony Stanger – with Dods winning the sprint in 1980.   Tait was a frequent competitor on the circuit.

The programme currently has 34 events and starts with a Round the Town race at 6:30 am. Traditionally a small cannon is also fired from the town square at 6:30 am in all four directions to mark the start of Games Day – and the start of the race which needs 5 runners before it can be held.

The starts with a race for athletes with special needs and there are races for Youths, for Juniors, for Seniors and for Over 45’s, events for Ladies, races for Front markers and for Back Markers in most categories, and an Obstacle Race.   There are also races for 6 – 8 year olds and 9-10 years old (boys races and girls races held separately).   There is also an interval at mid-day during which the crowd is entertained by a pipe band.   Two of the big names in Games distance running – G Tinion from Dearham and J Brotherstone from Gordon were frequent visitors and both defeated former world record holder Gordon Pirie in the Mile where Brotherstone won in 4:10.5; Pirie was also well beaten in the Two Miles.   He was later quoted as saying that he was surprised at the high standard of running on display.   He would not be the only visitor surprised in that fashion.

The Games have also had their fair share of controversy.    For instance in 1961 young James Kirk from Lochgelly ran in the Mile Race, ran well and was first over the line.   The representatives of the second placed runner put in a protest on the grounds that their man had been jostled going down the back straight.   The protest was upheld by the meeting judges and Kirk disqualified.   Many that day thought that Kirk had been the better man on the day and deserved to win but that’s not how it worked out.   Kirk threatened to leave the sport but fortunately he did not and went on to have a great career as an athlete.

In 1964 Olympic sprinter Berwyn Jones refused to run after “discussions with the Committee” because he had claimed appearance money of £60 .

Then there was the story of Tommie Smith, the Olympic 200m gold medallist who became a professional athlete and competed in Britain in 1972.   He ran in Wakefield for the title of World Professional Sprint Champion against some of the best of British professionals who included Scotsmen George McNeill, Bob Swann and John Steede.    He travelled up to Jedburgh on the Thursday and tried to enter but, as entries closed two weeks before the meeting, his was not accepted on the grounds that the rules applied to everyone.   Legally correct – but there have always been times when a late entry was accepted – on one occasion I had an entry on the day accepted for a Games Hill Race, probably because I would not interfere with the proceedings at the head of the field. 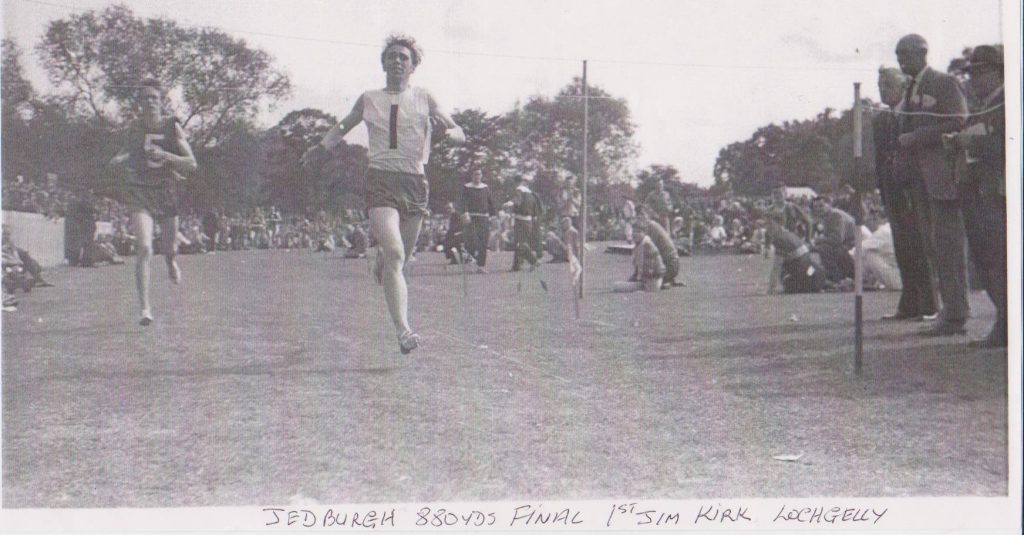 Like all athletics – professional and amateur alike – and maybe like most sports, the numbers have dwindled, spectators and competitors alike.   But with a tradition as strong as Jedburgh’s you can bet that the Games will continue to flourish.