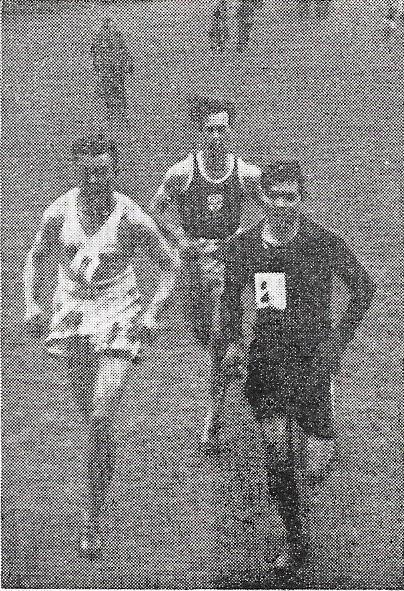 Having looked at the progress of the club and its members over the period from 1924 to 1950, we can be a bit more selective for the period up to 1972 when the YMCA ceased to exist.   Progress of the Senior team between 1950 and 1955 is noted in the following table.

Team for the Edinburgh to Glasgow, November 1949 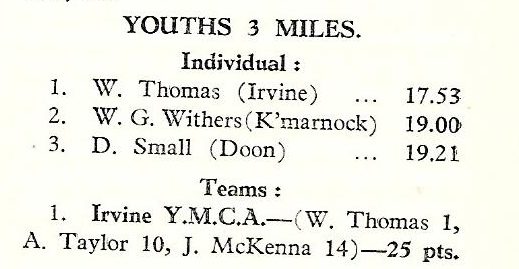 Individual success came again in the late 1950’s from Billy Thomas whose career as a runner in Scotland was far too short, although he did perform at a very high level in the USA where he had a scholarship to study English and Athletics.   In season 1955-56 he was third in the National Youths Championship and the following year he was second in the same age group and in 1958 he was fourth in the Junior Men’s race.   Nearer home, he won the Ayrshire Harriers Clubs Association and South Western District Championships in 1958.   His championship credentials were never in any doubt but how was he as a competitive runner?   There was no more competitive environment in Scottish endurance running than the Edinburgh to Glasgow eight man relay race and Thomas ran in it three times.   In 1957 he ran on the very tough second stage (probably the toughest in terms of the standard of runner put out by the various teams) and moved the team up from 11th to sixth – a quite amazing run for a Junior Man in his first go at the event.   The following year he again ran the second stage, and again he picked up places – two this tims, bringing Irvine YMCA up from 20th to 18th.   His last run was not a typical Thomas effort: he was on the first stage, which tells a tale on its own – you never put one of your two top men on that stage – and finished 15th.   Clearly a top talent, we are told on the Irvine AC website that “Billy joined the RAF where he excelled at 800 and 1500 metres, before accepting a scholarship to study English and Athletics at Howard Payne College in Texas, where he was nominated as a member of the National All-American cross-country team in 1963, 1964 and 1965.”

As a group, the club’s Youth teams won the South West District championships in 1954, 1955 and 1957.   The names of the 1957 team are shown above with Thomas, Taylor and McKenna all appearing in both District and National teams.

The club’s record throughout the 1950’s in Senior, Junior and Youth groups as very good indeed and can be seen from the following lists of results at District level.   District has been chosen simply because it is not a parochial competition nor is it the highest level in the land – it is second only to the National in terms of relative importance..

Seniors in Black, Youths in Blue

* In this race Danny Lapsley finished first but had moved to West Kilbride: had he stayed, then Irvine YMCA would have had the first three places

The 1960’s would not be as kind to the club as the 1950’s had been.   In 1963 the YMCA building, home to the club, burned down and they had to the Woodlands Pavilion as a temporary home.   I quote from the club website’s history of the period:   “Spirit was low and the membership had lapsed to no more than 10, however by 1968 the club had rallied and a few short years of success followed, with team victories in the 10-mile relay championship, the Ayrshire 6-mile team championship (twice), the Scottish YMCA 10-mile relay championship (twice) and the Scottish YMCA 6-mile team championship (twice).”   The club had rallied, it was winning again, and the successes of the time should not be under valued.  It was not turning out in the national cross-country championship and for more than half the decade there were no teams at all from Irvine in the National Championships.

Towards the end of the decade however the talent that was Brian Morrison appeared in the Irvine YMCA colours.   His peak year was 1969 when he was third in the Scottish Junior Cross-Country Championship.   This won him selection for the Scottish team competing in the international to be held in Clydebank.   He was a scoring runner for the Scottish junior team when he was 19th finisher.   He  had local victories in the AHCA Championships in both 1969 and 1970.   He was also a good class track athlete, ranked ninth nationally in 1969 for the 3000m steeplechase with a time of 9:24.0.   He was also ranked in 1970 and 1971 with 9:39.0 and 9:31.2.   Unfortunately, like Billy Thomas before him, he emigrated, in his case to South Africa.

Then In the spring of 1972 the club resigned from the National Association of YMCA’s and renamed the club Irvine Athletic Club, eventually being incorporated into Irvine Sports Club in 1974 as a member section.

Irvine YMCA had been a good club which produced more Scottish international athletes than any of the many other YMCA clubs in the country except Motherwell YMCA and contributed to Scottish athletics for 48 years before ceasing to exist.