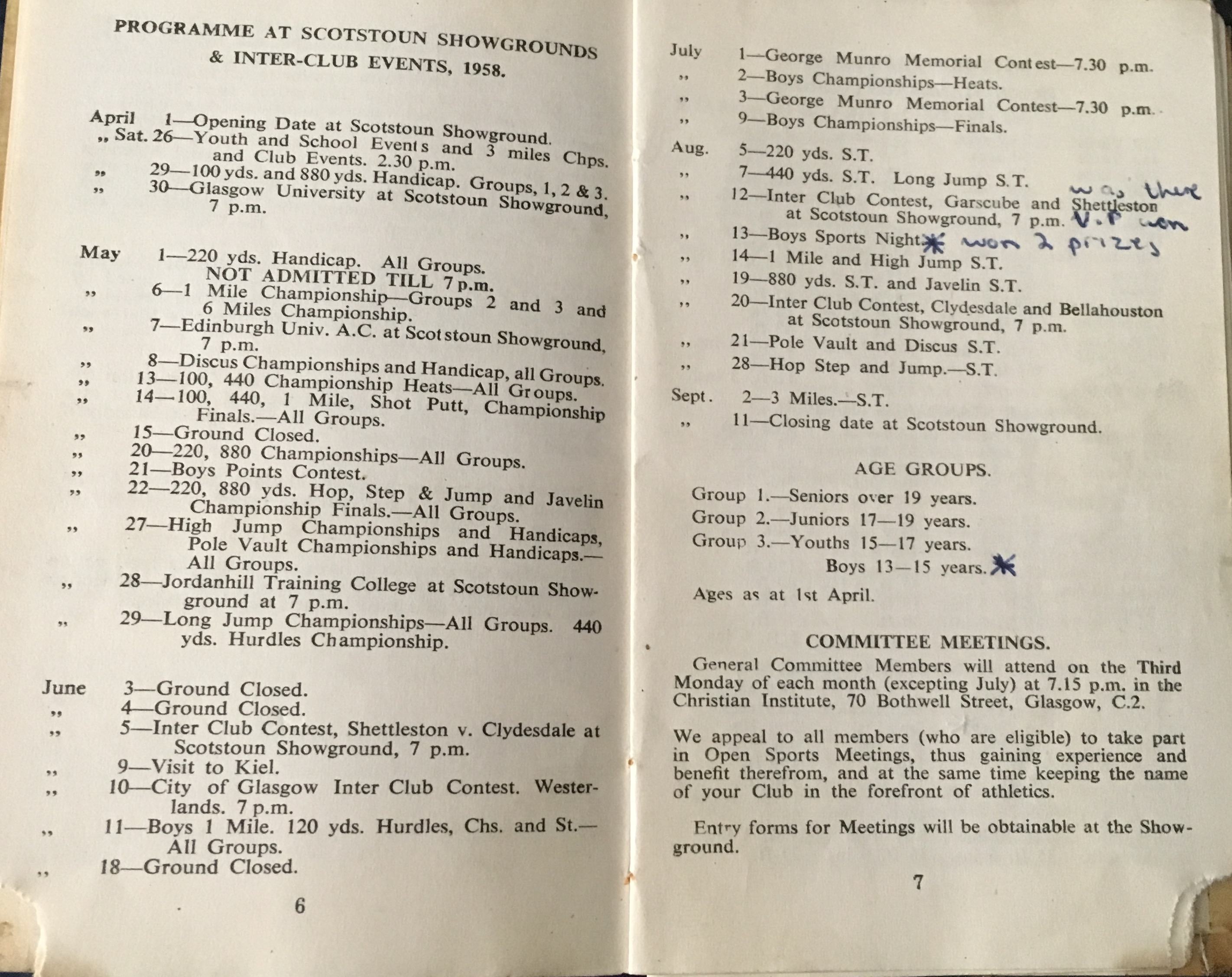 The inter-club track match as always an important part of the summer season.   In the 1950’s and 60’s track competition  was mainly in local sports matches (often run by the local works such as Singer’s Sports in Clydebank or Babcock’s and Wilcox in Renfrew), Highland or Border Gatherings or Games, or at one of the few still organised by football clubs (Rangers FC or Falkirk FC), and the match between clubs was a key part of the competition.   These were in league competition (although the leagues were fewer for the majority of clubs or combined with a bigger sports meeting, but there were many which were simply organised between two or three clubs outwith any other function.   They gave the athletes scratch competition, no prizes on offer and no pressure other than that imposed on the runners by themselves.    In my case, my first three competitions ever were inter-clubs – against Springburn and Garscube Harriers at Springburn, against Greenock Glenpark Harriers at Ravenscraig, Greenock and against Maryhill and Monkland Harriers  at Whitecrook in Clydebank.     The fixtures were often held in midweek, on the usual club nights of Tuesday or Thursday with the ‘away’ tea, travelling by bus.   I remember our bus getting lost in Springburn and picking up Tommy o’Reilly who was walking along the road and guided us to the venue!

The Universities of course had their own annual competitions with grand sounding trophies for every inter ‘varsity competition.   The intention here is to look at these various kinds of competition.

The Victoria Park fixture list above dates from 1960 and shows seven or eight inter club matches involving Edinburgh and Glasgow Universities as well as Jordanhill Training College and against Bellahouston Harriers, Clydesdale Harriers, Shettleston Harriers and Garscube Harriers.   Although they were very closely contested, these were also social occasions with tea and  buns provided – the burnt sausage rolls were usually kept for the cross-country inter-clubs.

There were of course inter club competitions at Sports Meetings and at Highland Gatherings – mainly two mile team races and relays – medley relays were popular with teams and crowds alike – and there are links below to races at the major games.