When the War started the SCCU set up an ad-hoc cross-country governing body  for the duration of the War.   Events were organised to keep the sport going but given the number of men on active service, and the number posted to different parts of the United Kingdom, they were not recognised as national or district championships.   Many athletic careers were disrupted or terminated at this time.    In Dundee Chick Haskett married Christina McLaren, daughter of Mr and Mrs A Donnet on 21st June 1940.   Among the many differences in the world of athletics at the time, there were fewer fixtures, there were fewer runners available to clubs and newspapers were greatly reduced in size.   The latter of course affected the amount of coverage of all sports – for instance the report on the McAndrew Relay in 1942 was not printed on the following Monday but on the Tuesday Glasgow Herald in four lines in a paper of only 6 pages.   All the weekend sport was in one column on the back page.

There was also a major change in the city’s athletics scene when the war started though.   From the Dundee Hawkhill Harriers website:

“Dundee Hawkhill Harriers and Dundee Thistle Harriers were struggling to maintain member numbers, with so many heading off to the armed forces. In 1940, the Luftwaffe bombed the Thistle Harriers clubrooms in Abbotsford Street.   With both clubs struggling, they amalgamated into the “Dundee Harriers”, becoming the only functioning Harriers club in the East of Scotland during the war.”

The result was a very strong club indeed – relative to the other clubs in the area that is.   However, the joint clubs had their losses due to the war too.   Three of the top Thistle men were moved to Glasgow where AM Donnet, A Hay and AL Hay joined Garscube Harriers.

The East District Cross-Country League started up again – unofficially.   The results of the war-time series of league contests are not recorded officially.   But there was a competition that followed the league format and rules and it was reported on 16th March, 1942 that Dundee Harriers had won the East District League final race.  Chick  Haskett had finished eighth.   Into the summer that year and the Perth six-lap relay was held on the North Inch with Chick in the club C team which was unplaced.   In May, Morgan Academy took on a Dundee Harriers team with Chick competing and were well beaten.    One week later the match against St Andrews University took place despite the War and an RAF team was invited to compete.   Where teams had previously been selected with named runners for each event, the club now listed the events to be contested and asked 12 or 14 runners “and all others” to report early.   There was also a match with the Boys Brigade at the YMCA grounds which was described as the Brigade’s first athletics inter-club since the war began.

The winter season began with a trial to pick the teams for the McAndrew 4 man road relay in Glasgow. Held on 21st Sep 1942, there were 20 runners in the race.   The first two finishers were RAF men Higgins and Holmes with Chick Haskett third.   The race itself was held on 2nd October – it was always on the first Saturday in October – and the preview read:

The Dundee team which ran in the race was J Brannan (missed the trial because he was running in a road race at Forfar), C Haskett, Cpl Holmes (RAF and Derry Harriers) and A.N. Other.   There were two teams entered and the A team finished fourth in the race which was won by Maryhill with two internationalists in their foursome.

This was followed a week later – 9th October 1942 – by another fourth place in the second annual Kingsway relay.   It had been started the previous year with an entry of ‘about a dozen teams, most of which came from the Services.’   Garscube won that year from Maryhill.   In 1942, it was a   Maryhill victory, Garscube was second Shettleston third and Dundee fourth.   There were seventeen teams forward – quite remarkable given the wartime situation.  Chick Haskett was on the third stage for the Dundee A Team.   The club had three teams forward with the others finishing 6th and 9th.    One of the talking points was the Garscube team that finished second.   It contained three Dundonians in AM Donnet, AL Hay and A Hay.   Jim Brannan was quoted as saying that they didn’t mind Garscube finishing second as “we regarded them as the Glasgow branch of Dundee  Harriers.”

It was Dundee’s turn to travel at the start of 1943 when the Maryhill Harriers 5 mile road race was coming up with a new trophy – the Nigel Barge trophy – and the team of four would select itself.   The chosen four were C Haskett, WJ Holmes, W Bannerman and D Cockburn.   Held on 2nd January the winning team of three was Garscube Harriers with Donnet and AL Hay counting runners, Maryhill was second and Shettleston third.   It was back to Glasgow on 5th March for the Garscube Harriers race at Westerton – teams could enter up to 8 runners but only 4 were to count.   Chick Haskett was in the team of course and Garscube won from Dundee Harriers.

Rules were all over the place at the time and on 5 March 1943 the Midland District ‘Championship’ took place at  Westerton, the Garscube Harrier HQ, with 8 to run, 4 to count.   Chick Haskett was in the team for the race which was won by Dundee’s Jim Brannan.   The winning Garscube team contained AM Donnet and AL Hay.   Another month and it was a home race for Chick and his team mates.   The Around Dundee Relay was held on 2nd April.   Garscube had two teams, Shettleston 1 team, Maryhill 2 teams and Dundee 3 or 4 teams.   Three of the Garscube team were Dundonians – Donnet, A Hay and AL Hay.  Result and report. 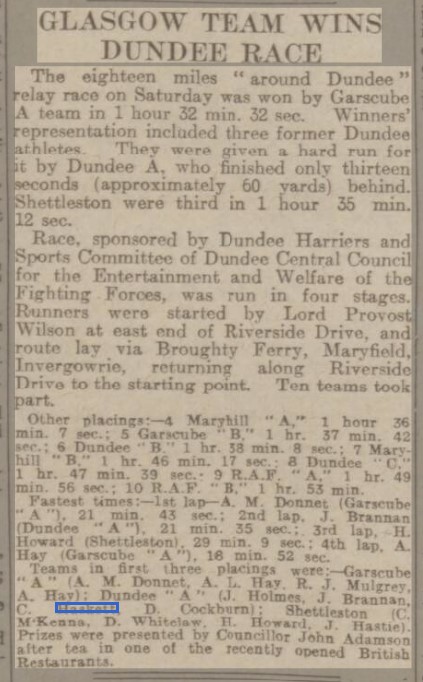 The winter season could have been regarded as a success – carrying all before them in the East District, the club was competitive nationally with the good second place, beaten by only 13 seconds in the Round Dundee race and with Shettleston third.

The following winter the team travelled to the McAndrew Relay on 2nd October and finished fifth behind Maryhill, Shettleston, Garscube and Bellahouston missing third place by just over half a minute in a close run race.   This was followed by the Kingsway Relay on 15th October with the ever-present of the year before, Chick, again on duty.   The result was very close: 1st  Maryhill Harriers 53:20; 2nd Garscube H 55:12;  3rd Dundee Harriers 55:32;  4th Shettleston Harriers 55:34.   The other Dundee teams were 8th and 12th.   These were both road races and it should not be forgotten that the Eastern District League matches were continuing and at the end of January Chick was third at Arbroath on a course of four and a half miles over field, road and path.   In the final match, both A Donnet (2nd) and C Haskett (4th) were in the winning Dundee team.

The Round Dundee was held again in April 1944 and again Haskett was listed in the team but after the organisation had been praised so highly the previous year it was not quite so efficient this time round: 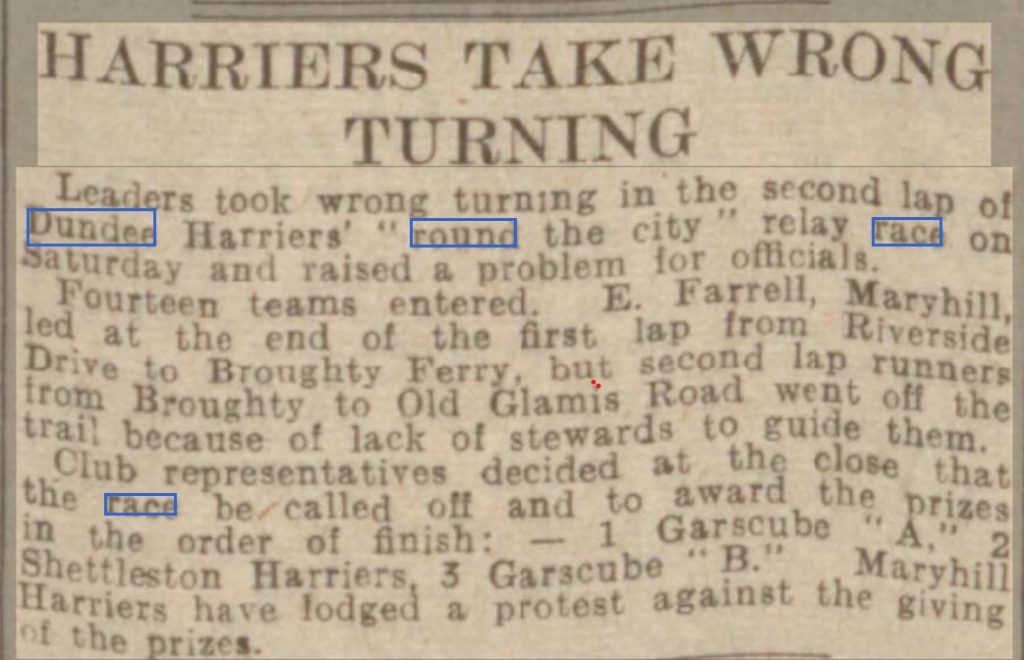 You would expect the Maryhill protest of course but the Daily Record in Glasgow suggested that there should be a ‘lead bicycle in front of the front runner to obviate such errors.   Chick was not mentioned very much for that year but at the end of 1944 and start of 1945 Harrier coverage was scanty but we saw this in January 1945.

On 19th February 1945 the report on the sixth and final match of the East District League indicated that Dundee Harriers had won the League for the fourth successive year and Chick was fifth finisher, third Dundonian.  In April the club team was second in the 5 lap relay round the North Inch in Perth but the team was not given in either of the local papers.   There were the usual track fixtures in summer 1945 – the match v St Andrews, the Football Supporters match at Arbroath, the Arbroath Police match at Gayfield but Chick did not run in any of those although he was listed as a judge in the Football Supporters fixture, and in the latter AM Donnet won the Two Miles in a Garscube Harriers vest with AL Hay third, also Garscube.

Came the winter and the Glasgow clubs again dominated the Kingsway Relay  which was won by Shettleston.   The War over, the days of Dundee Harriers came to an end with Thistle and Hawkhill runners now being opponents rather than team mates, and the two teams finished fifth (Thistle) and tenth (Hawkhill).   At the NCCU AGM at the end of the year AM Donnet (Thistle) was elected Vice-President and P Henderson (Hawkhill) was elected as one of the East District representatives to the General Committee.   Hawkhill won the East District Championships in 1946 but it was an unofficial championship and as such  has not been recorded official.   The National Cross-Country Championships were held in February but there were no teams or individual runners from Dundee.   It was a difficult time both locally and nationally.   Chick Haskett was now, in 1946,  30 years old and this was before the veterans movement had started.  The cartoon below was drawn after the 1946 relay and the Hawkhill team was sixth.   Chick ran the fourth stage, was third fastest and picked up one place. 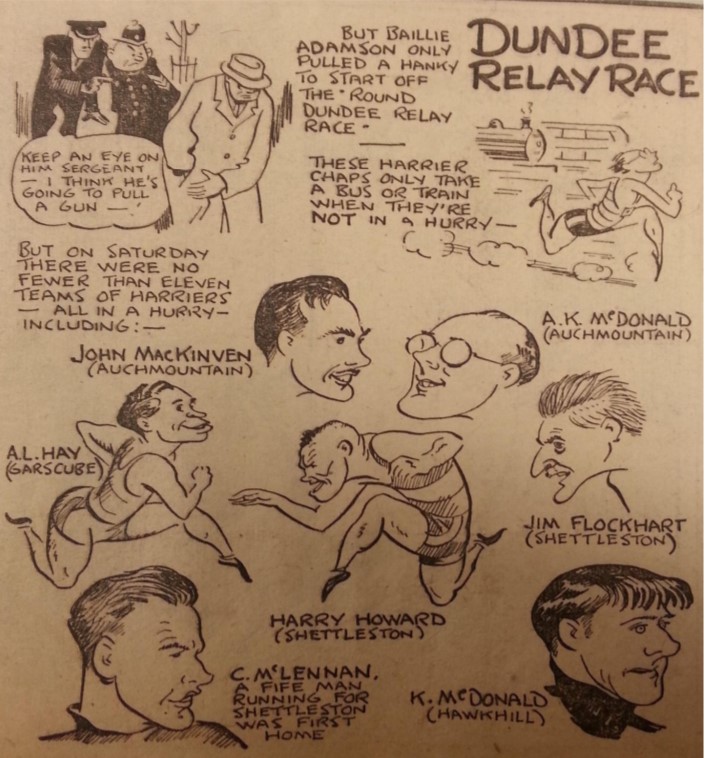 The final stage times for the first ten teams: 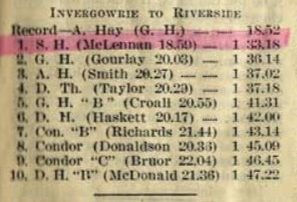 In the East District Championships the last counter for Hawkhill was G Haskett.   The team was sixth.

The following winter, 1946-47, had George Haskett placed  43rd, in the East District Junior Championship when Hawkhill Harriers were third with the Thistle winning again.

There is a reference to Chick in Youngson and Cline’s book ‘A Hardy Race’, concerning the September 1948 Perth to Dundee race, which that year was also the Scottish Marathon Championship, and  read –

“Charles (Chick) Haskett, father of well-known runners Christine and Charlie, remembered that era well. During the War, Dundee Hawkhill kept going, and joined up with Thistle athletes, since the Thistle club hut had been bombed out! Perth to Dundee was the big event – occasionally a full marathon. Chick used to sell race programmes along the route, while the competition was actually on.”

Clearly a man of resource!   The following cutting came from the Fifeshire Advertiser’  Auchterderran column on 10th January, 1948: 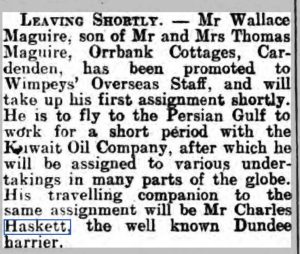 Chick’s son Charlie tells us that his Dad did two tours abroad as a plumber with Wimpey.   One was to Kuwait and the other to Borneo.   While abroad  he organised all the company’s sports activities.    This was certainly the last sporting reference to him in any online versions of the Courier, Evening Telegraph, Scotsman, the Fifeshire Advertiser or any of the other local papers.

There is no doubt at all that the family was seriously involved in sport in the town for at least two decades in 1949.   Of the four brothers, three were members of the Dundee Hawkhill Harriers club.   Two of them married fellow harriers and AM Donnet of Dundee Thistle Harriers was Charles’s brother-in-law.   The fourth brother, Ralph, was younger than the rest and emigrated to America where his son, Gordy Haskett, is involved in athletics.    Back at home Chick had five children of whom two were international athletes and another had been a runner before settling on football as his sport.   If ever the expression  “all in the family” applied to athletics, the Haskett family in Dundee exemplified it.