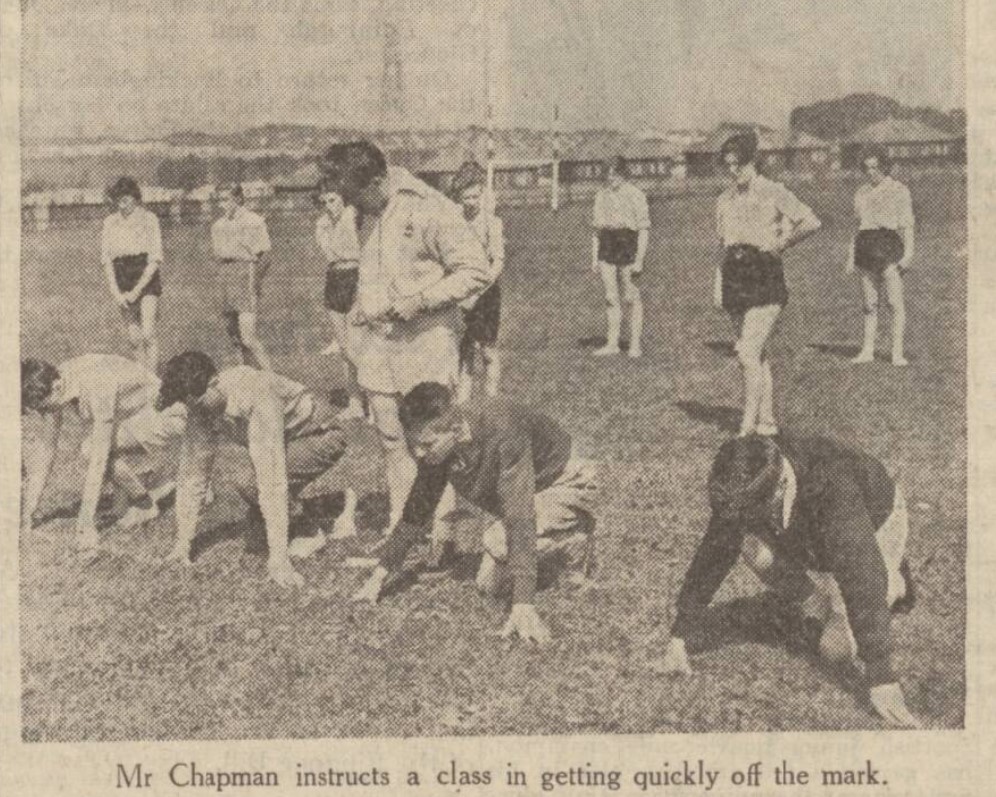 Tony Chapman had to himself quickly off the mark when he took over as Scotland’s National Coach in December 1948.   He was very busy – committed, flexible, enthusiastic and personable, he quickly became a recognisable figure at pretty well all athletics venues.   He could not however be everywhere and the requests for help were coming in from all over the country.   Fortunately the editor of ‘The Scots Athlete’ , Walter Ross, was very keen on broadening the scope of the new magazine and on reporting all aspects of the sport.   Chapman and Ross between set about informing and educating Scottish athletes, clubs and coaches via the magazine.   1948 had already seen the magazine publish a half page ad for a four day weekend course at Dunoon for athletes wishing to increase their technical and practical knowledge (Fee £2:15:6d), an article by Allan Watt on Coaching,  report on training weekend for Olympic ‘possibles’ , Emmet Farrell had a two page article on training for cross-country (he had won the SCCU Championships in 1938 and again in 1948) and shown great interest generally in coaching and advancing the development of the sport before Chapman was appointed in December.

Appointed in December, 1948, his first article appeared in the December 1949 issue of the magazine under the heading: THE NATIONAL COACHING SCHEME and it deserves to be reproduced here in full. 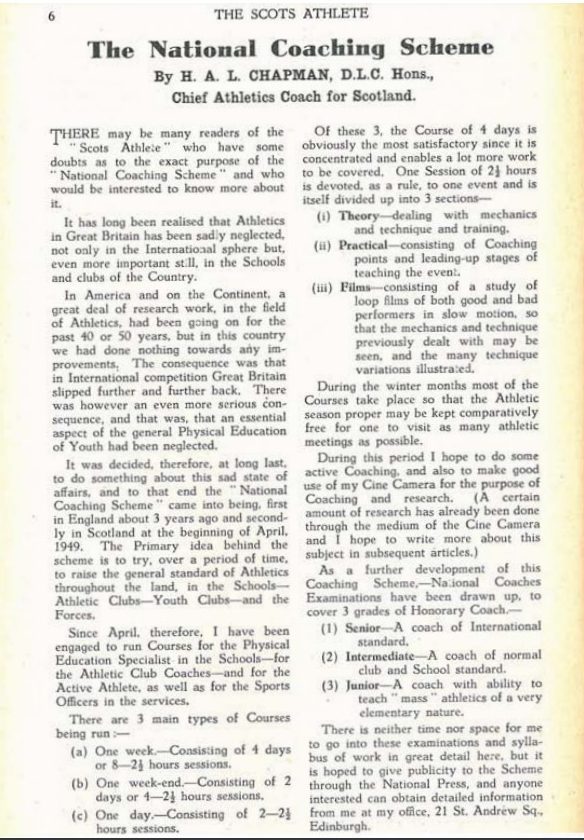 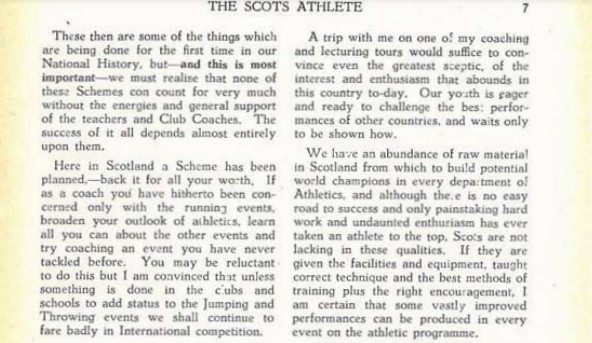 Having set out his aims and challenges to clubs and athletes, he went on to do hid own bit in the process by having articles printed in the magazine fairly frequently and some were quite lengthy.   In January 1950,  Winter Training was the subject with the next one being ‘The Training Board’ which ran to four pages in September 1950 and can be seen at this link.   Before these articles the magazine published  articles on coaching by others including several in a short series called Peak Performance, and then after the Winter Training piece there was one in January 1951 by T Montgomery, Honorary Senior Coach, on Groundwork for Track and Field as part of a series entitled This Coaching, in May 1951 the Shot Putt came up for inspection with one article on great shot putters of the past and another on coaching and technique by T Montgomery.   The support for coaching from the ‘Scots Athlete’ was there for all to see.    In   1951 T Montgomery had ‘The Fundamentals of Sprinting’ published – it ran for two and a half pages – with a follow up on the same event in the Mid-Summer issue which came out in September.   Then there was one on Throwing the Discus by the same writer in July 1951.   By now, Montgomery was becoming the regular athletics coach writer for the magazine and in August there was a four pager on Middle Distance running.

Chapman was back in January, 1952 with ‘A Training Guide for Coaches and Athletes‘   with a sub-heading reading ‘Suggestions for Formulating Schedules‘.    This one ran to no fewer than five pages and can be accessed via the link.          There was a follow-up article in February and one in March which have been added below the first part at the link above.   It continued in the April/May,  and June 1952 issues which are also at the link.   It is a very interesting look at what was the accepted best practice of the period – preparations, warming up, sessions, etc, etc – and well worth comparison with what athletes are doing in the 21st century.   Does it stand up to comparison?   Forget the terminology, terminology in all aspects of life changes all the time.   Look at what he is saying – how much, if any, of it still stacks up?   Whatever way you look at it, it is a significant addition to what was available to Scottish Coaches and athletes of the day.

Montgomery continued to write his coaching articles – Throwing the Javelin in August ’52 was followed by a study of javelin thrower M Denley (Great Britain) by Chapman a month later, the two articles being complementary.   The coaching articles seem to have been well received by readers as they continued to be printed – eg in August/September 1953 there was Basic Athletic Principles by JV Lyons which ran to two issues – 4 pages + 2 1/2 pages;  and there were others such as Distance Running Aspects by LH Weatherill, a former England Track and Cross-Country International, and the articles by Arthur Newton which had been running since 1947.   Percy Cerutty was another who had been and would continue to appear regularly until the very last issue of the magazine.

One of the most thought provoking series in the magazine was Web Centre by Brian Mitchell which began in January 1947 and can be accessed via this link:

‘The Scots Athlete’ ceased publication in  June 1958.   Tony Chapman’s last article was the one quoted above.   There is no doubt that it had been a good mutually beneficial relationship – he got his message across, the magazine got many interesting articles that broadened the scope of the magazine and possibly gained them readers.  It also worked well for the Scottish athletics public and that was maybe the point of the whole exercise.