As far as the Edinburgh to Glasgow eight man relay was concerned, the race was the thing; the occasion was unequalled in the sport but as in all athletic contests, every club was striving for success.   The sought after success varied from club to club, but at the sharp end of the field, success was measured in medals won.   The medals, sponsored by’ The News of the World’ newspaper, were specifically designed for this race and are worth inspection.    Those in the first illustration show the real design:   on the one side it showed Edinburgh Castle as the starting point of the relay while the Glasgow City Chambers was shown inside a laurel wreath to the left of the castle.   The medals came in gold, silver and bronze with a fourth set to be awarded to the club who, in the opinion of the judges, had turned in the ‘most meritorious unplaced performance’ 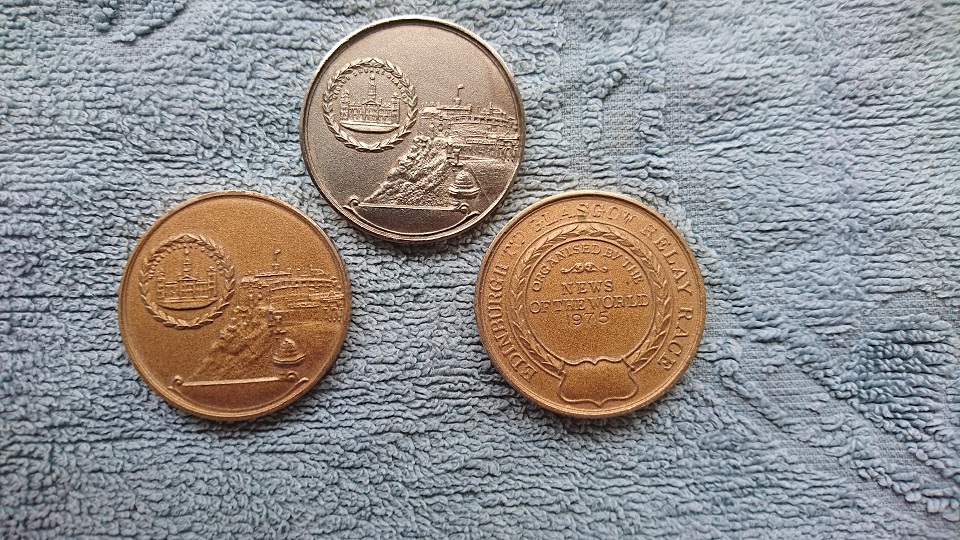 The reverse of the medal had the inscription ‘The Edinburgh to Glasgow Relay Race” round the medal inside the rim with the sponsors name in the middle and the year of the race.   The medals above come from the collection of Colin Youngson’s collection, and his record in the race will be reviewed below.

After the News of the World stopped its sponsorship, it looked as though the race would become a major casualty.   Its existence was in jeopardy but due at least in part to the efforts of Des Yuill and his manager at Barr’s, the sponsorship was taken over by the soft drinks manufacturer.   Shortly thereafter, new medals were struck and examples of those, also from Colin’s collection, are shown below. 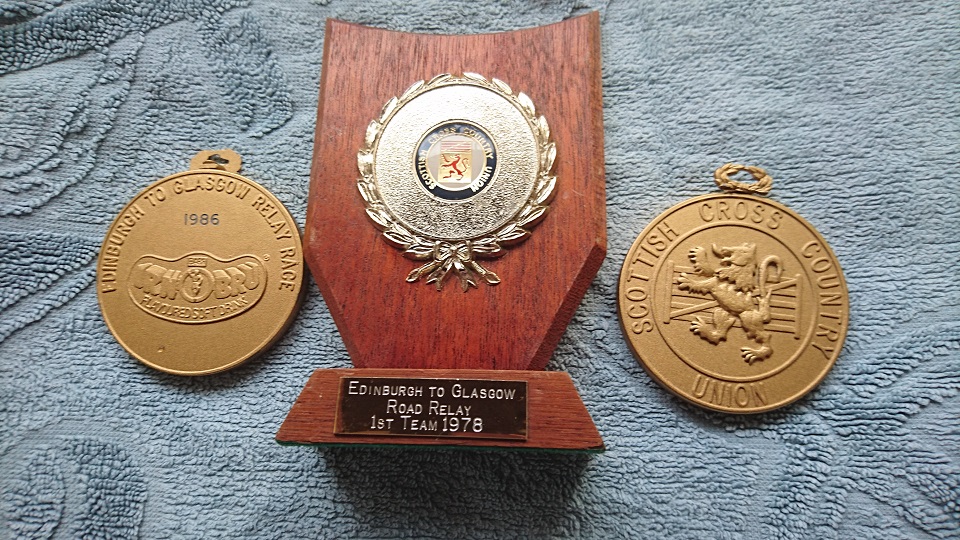 There were several differences: the medals were much larger, while the reverse still had the race title round the rim and the sponsor’s name in the middle with the date, the obverse had the crest of the Scottish Cross Country Union – the five bar gate with the rampant lion front and centre.  They were still special medals but many would have liked the two cities represented on them.   The medals retained the same  design for first, second and third teams, and for the most meritorious performance come to that, with only the colour differentiating them. 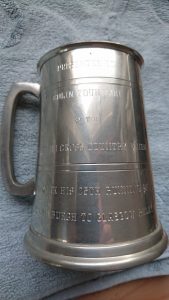 Colin had a wonderful record as a road runner and, arguably, reflected the real heyday of Scottish road running.   It was an era that is unlikely ever to be repeated.   Many road races at all distances all over Scotland, the SAAA marathon championship held as part of the National Athletics Championships, the Edinburgh to Glasgow as the pinnacle of the winter season.    There were small teams sent to races at home and abroad, and every encouragement was given by the governing body to athletes to travel and compete in them.    For Colin’s complete career, please read his profile which can be found here.   More SAAA marathon medals than anyone else, more appearances in the Edinburgh to Glasgow than anyone else with major contributions to medal winning teams for no fewer than five clubs.

His comments on the illustrations above are as follows:

3.   The tankard was presented unexpectedly in 1991, after I had just completed my 25th E to G since 1966. The years I took part, the clubs represented and the team finishing positions, were engraved on the back. After my last one in 1999 I had the five with Metro Aberdeen Running Club engraved underneath, to make 30 in all.

Colin freely admits that he loved the Edinburgh to Glasgow Road Relay!