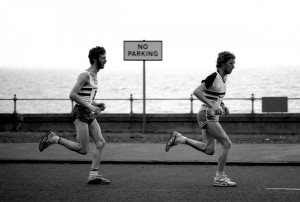 1981 SAAA Marathon 2.20.42. Meadowbank. 1st after leading all the way and a struggle with Donald Macgregor.

1983 E to G. AAAC 1st. Self second-fastest on glory leg after tremendous struggle to hold off Peter Fleming.

1975 Two Bridges 36 2nd. 1st Scot 3.29.44. Almost three minutes behind the fast-starting Cavin Woodward but raced away from Mick Orton up the Forth Bridge whaleback.

1965-2013: 49 years in succession of running at least one Scottish championship per year.

[Some teabag, some talent!]