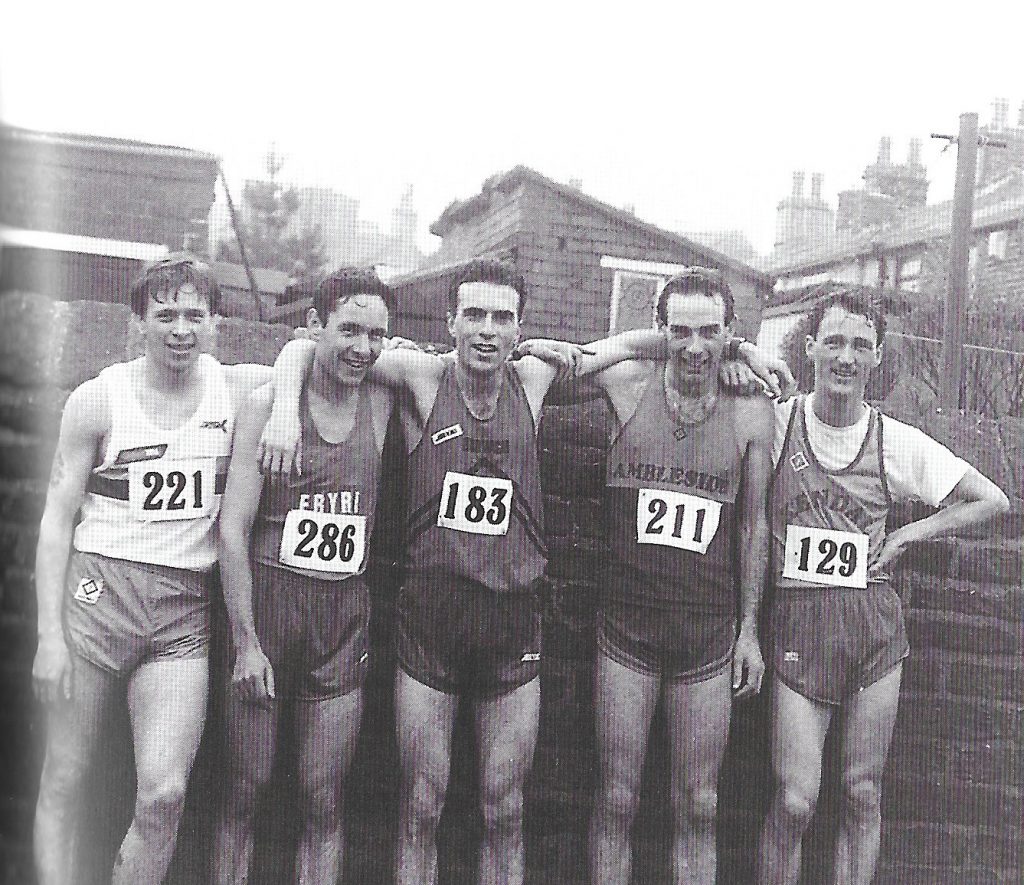 Colin Donnelly is a superb endurance athlete regardless of the distance or surface – that much is obvious – but there is a lot more to him than that.   He spent some time with Denis Bell and they ran, cycled and talked about running (and much more).   Denis has distilled what they spoke of and reproduces it for us below.

The following is a short-ish chat with Colin over a couple of easy beers one evening, after we had cycled over Crow Road to Fintry and then back….when I left Colin about the District Boundary on the top of Crow Road (East Dunbarton and Stirling); Colin wanted to put more clothes on for the descent, and then prepare himself for a run on the Campsies to Cort ma Law and back, from Clachan of Campsie, and ‘he’d see me back at the house’ later on!

I hope I do justice to Colin painting the general picture of his running career and what the beginning was that formed his fantastic levels of achievements; this complements Colin Youngson’s informative piece already shared.

How did you get started?

When I was younger I was keen on ‘exploring’…games at school ‘1 man hunt’…people tagged by ‘the others’ until last person ‘caught’; these were probably the earliest signs of great stamina and determination to not be caught!

Colin was at boarding school and there were the Dumfries and Galloway championships every year. There was a selection race to get into the school team … Colin recalls he was about half-way down the field of finishers, but found it really enjoyable, because it was very traditional cross-country (fields, burns, woods, scrub, etc …the stuff I also used to love!!..it seems ‘park runs’ were not our thing and I’m sure that chimes with many readers!).   (Colin mentioned the European Masters event in February 2021, at Balgownie, Aberdeen … running around playing fields!!   NOT, seriously NOT his cup of tea!!…).

He says the school playing fields were about three quarters of a mile from the school and he noted the earliest home got the best ‘hot’ showers..  and ‘training’ was 2-3 times per week … and he pushed on and got to being ‘first back’ so always had hot showers! Colin says ‘running was easy, simple’ and they were doing 3 mile road circuits 3x per week up to about 4th year .

‘In 5th year I won the trial and was in the Team for the County Championships’; in the event he says ‘I was in the front’, asking himself how??? and it had never happened before.   Colin won, and, he became the school’s hero…’I went from a nobody to heroic somebody in that one race result’. Colin’s Dad heaped praise on him, and that was a great stimulus for him to perform well and work hard…

He also did the hills with his Dad and younger brother, who didn’t at all enjoy the slog, but Colin ‘clicked’ and thus the absolute love of wild places…they did Tinto, Merrick, Ben Venue, Ben Nevis, Ben Lomond, etc…about 17 y.o. at this period.

‘In the school holidays I used to love going out exploring on my bike, and I was on the Cathkin Braes when I met this ‘older’ guy in the Cambuslang vest running and I said “how far have you been?’ He answered 20 miles, another 3 to go ..I’m training for a marathon’…’

Colin joined up and was training with Cambuslang every Tuesday night. Track, which was not liked at all, and don’t mention ‘track races’!!   Anyway Colin says he entered for Ben Lomond (at 17 y.o. though the entry was strictly for over 18 y.o.…! He says ‘I got 22nd and was very pleased with that, but a guy called John Blair-Fish thrashed past me on the descent…!!’  (JBF did that to a lot of us over the years..!). Colin recalls ‘exhilaration, and finding his ‘niche’…he was not happy on track and road and to this day is determined to stay off tarmac and hard paths – nothing, absolutely nothing, beats woodland trails, open soft ground, or hill terrain.

Colin says ‘I finished school and I wanted a holiday job, so was looking at ‘Hotels near mountains’ and found Achnasheen, as a waiter.  The shifts allowed me good times off to go and explore and cycle to Kinlochewe, Torridon,etc., and covered holidays before going to Uni…This suited me to the ground and I was doing good long runs in between working patterns, and the hill behind the hotel was a great and easy training routine…I worked on it so that I got ‘1/2 way up and reached the shoulder which levelled and then back off…great base training and strengthening my ankles, and improving my descending skills..  Within a week or two, the ‘flat shoulder’ became easier and I could push further towards the summit..’.

‘In my first year at Uni (Aberdeen) running for Cambuslang, I did Ben Lomond and it was a quality field, and I got a big ticket, running to third place’. 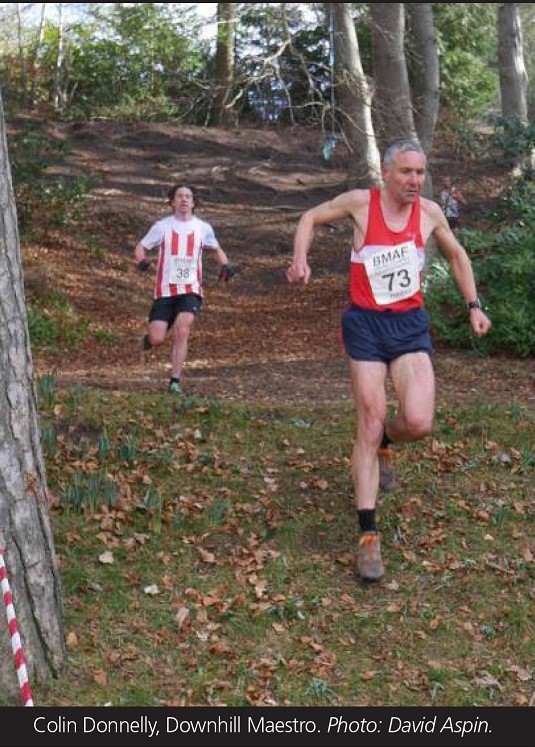 Colin winning the British M55 title at Forres in 2018

Colin is a Life Member of Cambuslang, recognition of his hill running achievements ‘Gold’ as described by Colin Youngson.   There is the Club History and Colin’s mentor, coach, friend is Dave Cooney, a great Club man, great administrator, and they still stay in touch (Dave is still doing well at road running). I asked Colin about his peer runners when they were getting brilliant team results and he notes with pride rubbing shoulders with Eddie Stewart, Alex Gilmour, Gordon and Steve Rimmer, Jim Orr, Charlie Thomson, Andy Beattie, Dave McShane and others. Relays, road races, X-country…

Colin says he was not always too bothered about races and had a few bad experiences (examples being Ben Lomond and Goatfell, not much details shared as to ‘why?’).

Colin says ‘I realised that the mountains and hills were where I needed to be, and married with strong running, allowed me to develop and achieve self-satisfaction’. 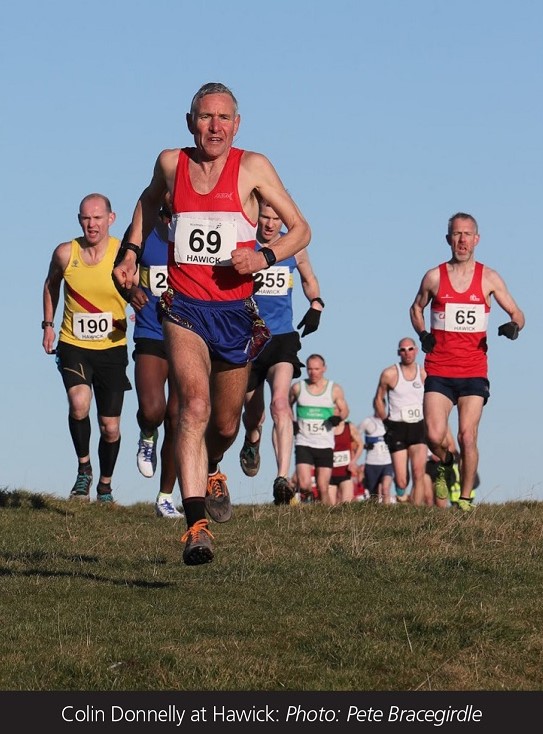 In about 1983-84 Colin (based in Anglesey, with the RAF) says he met Angela Carson, who was one of the top flight female hill racers. Angela would give Colin lifts to races she was running and Colin would go off and do his own thing in the mountains and they’d meet after the races.   Angela encouraged Colin to do races.   About 1986 Colin started to race the British Hill Running Championship…thinks he maybe got in behind Jack Maitland.

So how did things develop…?

At Aberdeen University, Jack was doing Forestry and Colin was doing Arts.  There was a 600 metre pitch and it was the base for group training, and at weekends Colin did his own training efforts.   Colin says “Jack was ’strange’” and he went out further (than the pitch) and ran between the trees and the boundary wall…they of course chatted to each other and Jack said to Colin ’I’m an orienteer’ (Jack has also had a brilliant but shorter hill running career too, as well as the orienteering, cycling, swimming and triathlons..).   In the 2nd year at Uni., being a member of the Uni club ‘Hare and Hounds’, Colin suggested they get the Uni minibus and ‘do trips’ on the ‘Wednesday sports afternoons’… this allowed them to go exploring into the hills and range out further.

Colin recalls in about ‘81/82 his Dad was driving him down to the Lakes to do the Wansfell race and he asked Jack if he wanted to go….they did, and Jack beat him….and Colin could hardly believe it!!

Jack got better and better and then made it into the Scottish hill running international team.

With his cycling swimming and running abilities Jack moved over to triathlons and got into the British Team (he was then with the ‘Pudsey and Bramley’ club, and based in Leeds.).

In the mid ‘80s Colin was getting more serious, working Air Force at Anglesey and had 5 very busy ‘racing years’…weekend on weekend and even back to backs (racing Saturday then Sundays, etc). He was doing roads and cross-country (representing the RAF)..his routines were like 1x speed session per week for about 40 minutes (at lunch hour); doing fast beach, including dunes, runs 3-4x per week.

Colin moved over to Nursing in 1989, on the mainland (England) where his routines were dictated by shift patterns, eg 3x early routines – track runs, c.4miles in 22 minutes approx.  Racing every week if not working.

And, like all hill runners, Colin got injured  – had torn cartilages in both knees about 2015 and had to take a full year out….a serious period…’may or may not be OK after surgery’…?! So, after stopping running again, but walking… and found the knees were ‘not sore’, started again with wee efforts, and re-building strength and fitness.  Then back to racing; Colin was of course delighted with this result!   Colin had found that there were joint benefits with big days in the hills and some racing, they were complementary.

Moving into the ’90s, Colin moved towards his own attempts at big endurance challenges; he’s now done seven or eight.

‘They were about ‘pure challenges for me’….

Not the record book system or such…. simply plan, prepare and do, simply said, done with great efforts and widely admired by most hill runners.   He did these as about once per year events..eg

Colin’s not in the Bob Graham Club, he never registered, as he didn’t want all the rules and regulations and stipulations to join the ‘role of achievers’.   The Bob Graham Round is described in Wikipedia as

For Colin, there was no ‘support, kit carriers, pacers, route-finders, meeting point sustenance, etc.’. Colin achieved just under 23 hours, and admits to making mistakes off Scafell and Bowfell and other places…! But he philosophically says ‘all part of the challenge to just do it’! (Colin clearly recognises the attempts by Billy Bland, Killean Journet, Finlay Wild, and Jack Kuenzie ..(current record holder in 12 hours 23 minutes, September 2022!)

We have a list of Colin’s races as published here in the Fell Runner magazine with all the details – Colin and Jack Maitland have their results marked.

Key rivals when Colin was racing were Rod Pilbeam, Malcolm Patterson, Billy Bland, …….(note the great Kenny Stuart from Keswick had pretty soon moved over to marathon running at top level (remember he won his first ever marathon at Glasgow in 1986) when he was being coached by Mike Norman for Commonwealth and World champs status…sadly Kenny burnt out with a debilitating illness.

Colin still has great personal aspirations for keeping fit and strong.   Right now at 63 years old. he trained until recently at the Hawick’s parks Miller’s Knowe, and Volunteer, doing 4 mile sessions aiming for 24 minutes; but he’s got fed up with being irritated by dogs so stopped these and now trains in the Minto Hills .

Colin recalls a funny story about him running in the Golf Course grounds bare chested …the freedom of running nicely in very warm weather…he got accosted by a lady member for being disrespectful (even though he was on the golf course outer margins!!) 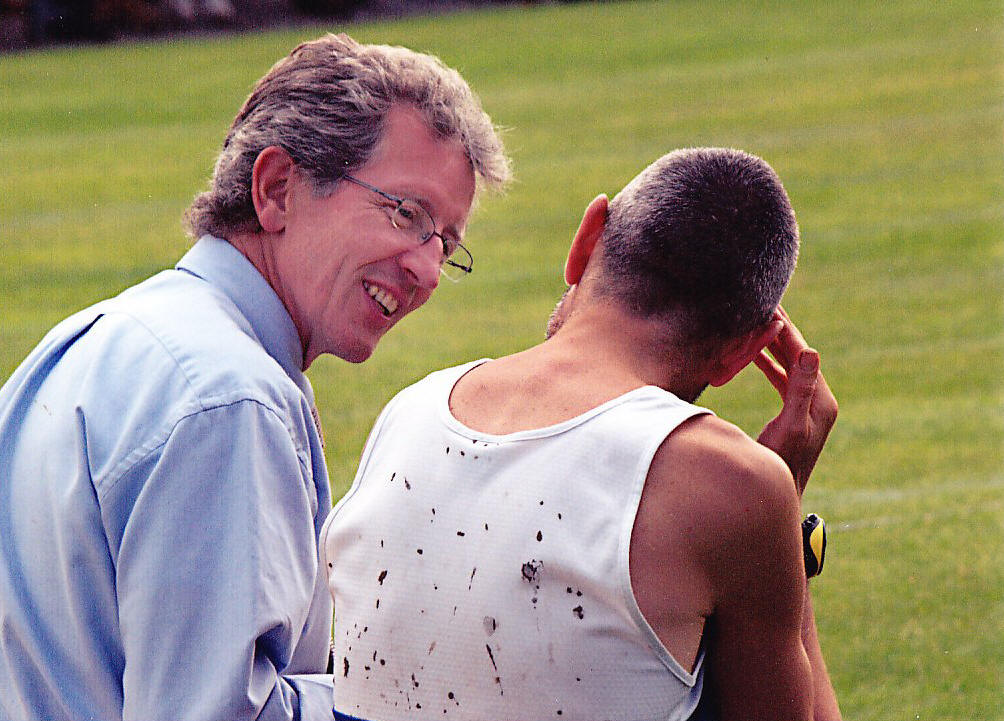