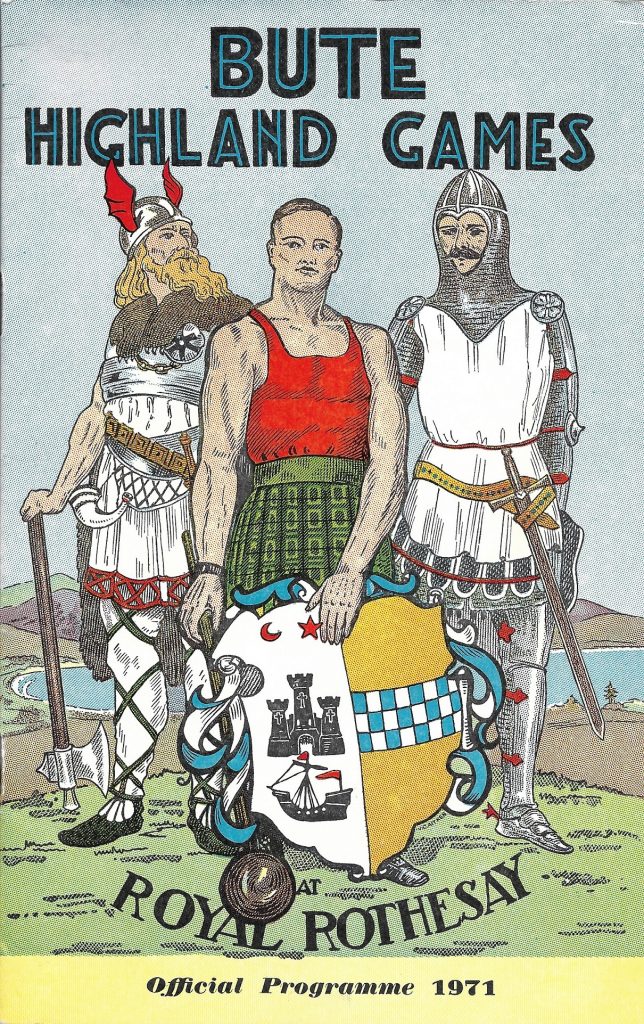 Bute Highland Games were held at Rothesay and it was another trip ‘doon the watter’ for the athletes.   It took place on the penultimate Saturday in August – the week before Cowal Highland Games  and was a good well-supported meeting on an ash track where the back straight was downhill and the finishing straight was uphill.   There were all the usual highland games events – highland dancing, pipe bands, wrestling heavy and light athletics and it had one of the longest road races on the calendar for many years – an 18 miles race.   It was originally a 12 miles race before going up to 18 which was  reduced in the early 1980’s to 10 miles and it is currently run as a 10K race.   This does not seem to have affected the attractions since there were 225 runners entered for the 2020 event.

The origins of the Games are admitted by the organisers to be a bit hazy but there is no doubt that the modern version dates from 1947 when they were started by the Bute Shinty and Athletic Club.   Results here as printed in the Glasgow Herald have a couple of well-known names – Willie Marshall of Motherwell YMCA and Arthur Warton of Garscube. 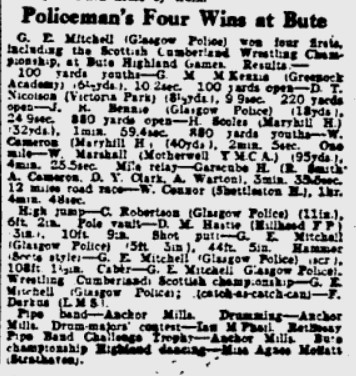 The organising body was recognised by the SAAA. One well-known official did not represent his club on the committee of the governing body, preferring to represent the Bute Shinty and Athletic Club. If  you were active in athletics in the 50’s/60’s or 70’s you’d recognise the names of the great and the good of the sport at the time among the officials listed at the foot of the first page – including the name of A Nangle.   A man lauded and insulted in equal measure – he was one of the two handicappers employed by the Association.

The meeting was immensely popular with all disciplines right from the start – in 1948  Alan Paterson cleared  6′ 2 1/2″ in the high jump (but was only third in the handicap),  JE Farrell won the 12 mile ‘marathon’, in 1950  W Jack won the 100 yards; JJ Barry the Mile, D McD Clark broke the native and all-comers records for the hammer  (and JE Farrell won the road race for the third year).   In 1952 Ulick O’Connor was there for the pole vault, the road race was won by Harry Howard of Shettleston and ECK Douglas won the wire hammer throw.  In 1954 the road race went up to 18 miles and was won by Jackie Higginson of Clydesdale Harriers and cross-country and track champion Aileen Drummond won the women’s 220 yards.  The records did not stop.   In 1955 Miss JDM Webster from Leith set a new Scottish women’s half mile record of 2:23.4, Ulick O’Connor from Eire pole vaulted 11’6″ and Tom Logan won the shot putt.   Incidentally folk singer Joe Gordon, running in the colours of Springburn Harriers won the mile in 4:23.   There were always women’s events on the programme and in 1956 Dale Greig won the 220 yards – she would become the first ever world record holder for the marathon in due course, and Doreen Fulton of Springburn won the mile but the race of the day was the 18 mile road race where Pat Moy of Vale of Leven defeated Harry Fenion of Bellahouston taking four and a half minutes off the best time for the race.

Three years later Tom McNab of Shettleston won the 100 yards and marathon runner Gordon Eadie of Cambuslang won the road race before a crowd of 5,500.  It was a very successful meeting all the way although the date was becoming very crowded.   The principal ones were The Edinburgh Highland Games at Murrayfield with its galaxy of international stars, and Crieff (a very popular professional meeting).   Nevertheless the standard remained high eg. in 1965 David Stevenson broke his own ground record in the pole vault with 14′ 8″, Mike McLean ran a 1:57 half mile, Mike Bradley won the Mile, Bill Stoddart won the road race from Andy Fleming and Doug Edmunds won the shot putt.   Every one was an international athlete.   However by now there were so many more meetings both international and national on the card that the meeting was not always reported on.   For instance, in 1970 the two big reports in the Glasgow Herald were on a meeting at GB level and on Edinburgh Highland Games, these were followed by an account of the final League match of the season and there was no space left for Bute HG.

The date of the meeting, the attraction of sailing down the Clyde, the historical connection of Glaswegians heading for Rothesay on holiday, all made it a popular destination.   Coming back on the boat with pipers, some of whom ‘had drink taken’ after a good day’s sport was another memory to treasure.  The Games has a reputation that still attracts many good athletes.   The attraction did not go away.

Have a look at the extracts from the 1971 programme below: 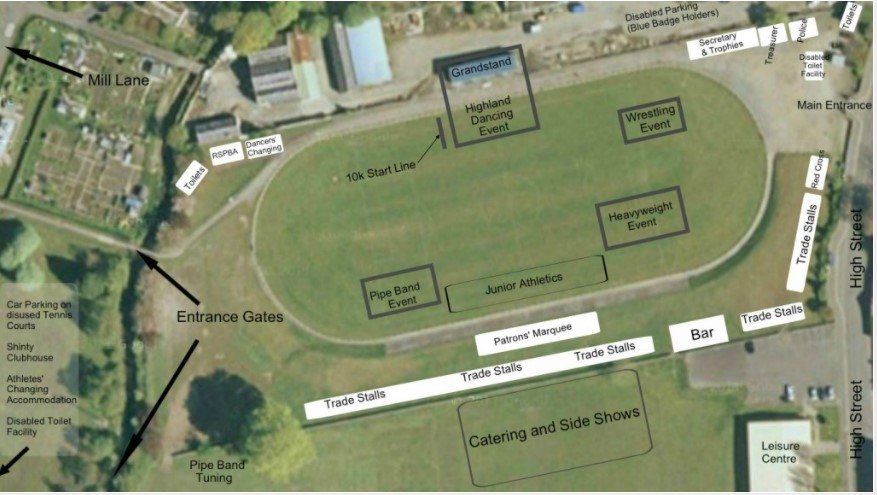 The extract from the programme for 1970 below includes all the running events, and the meeting results are at the foot of the page. 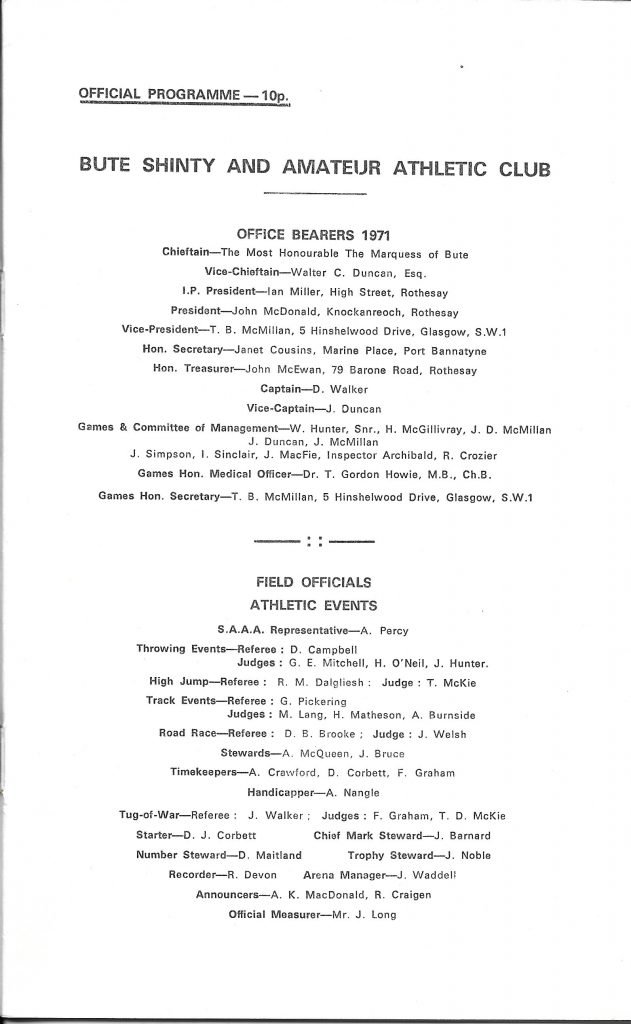 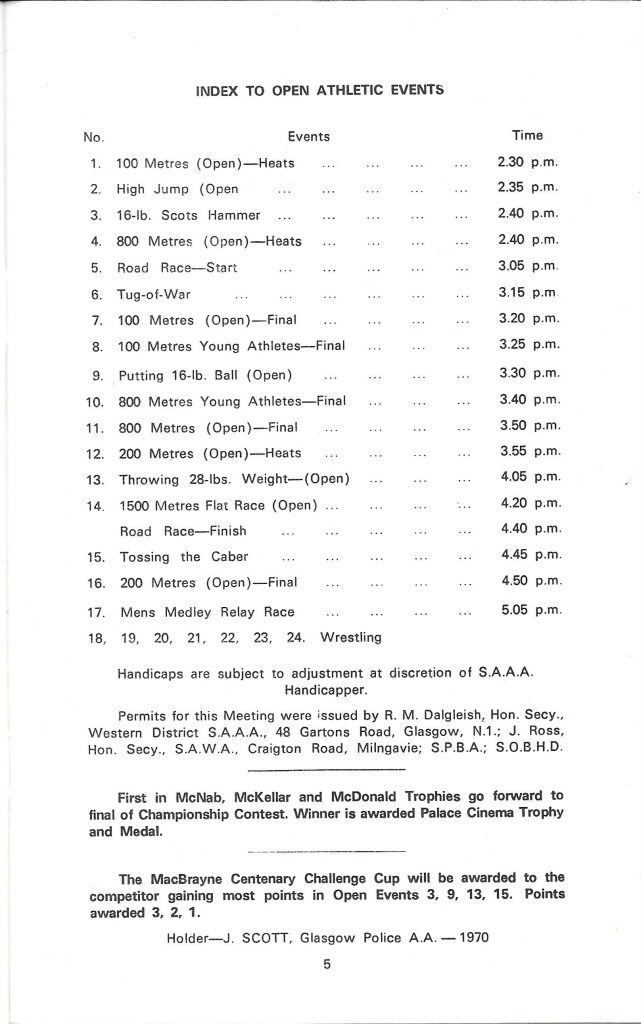 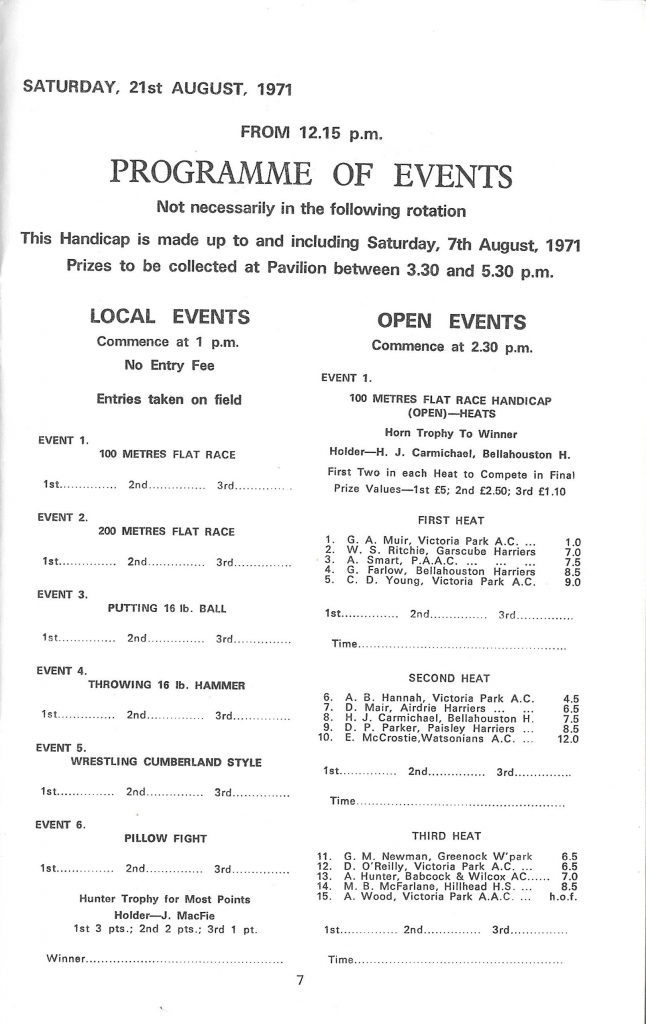 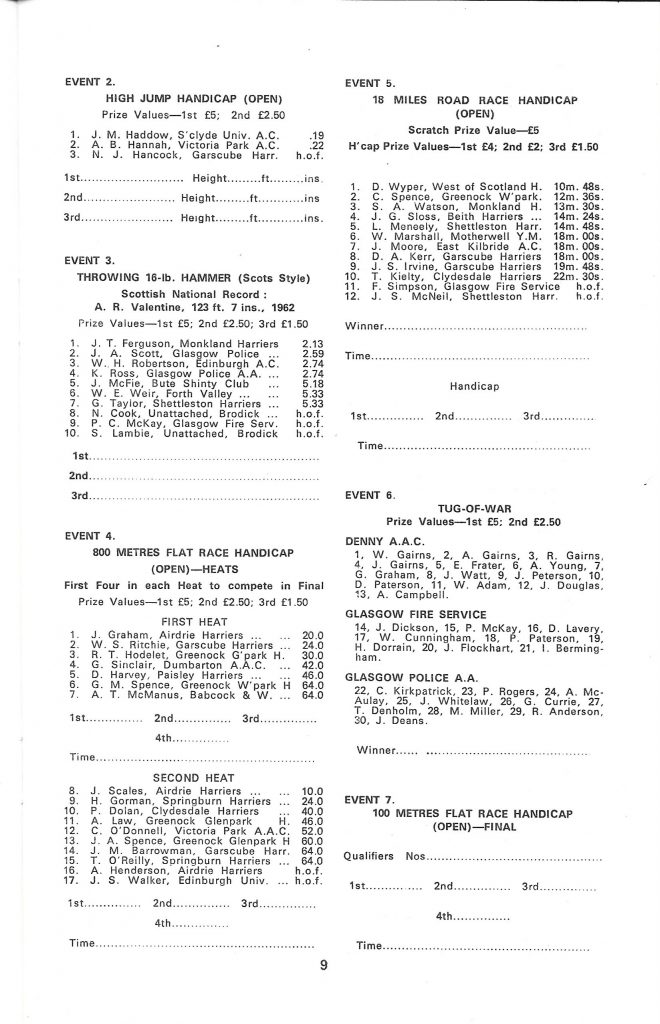 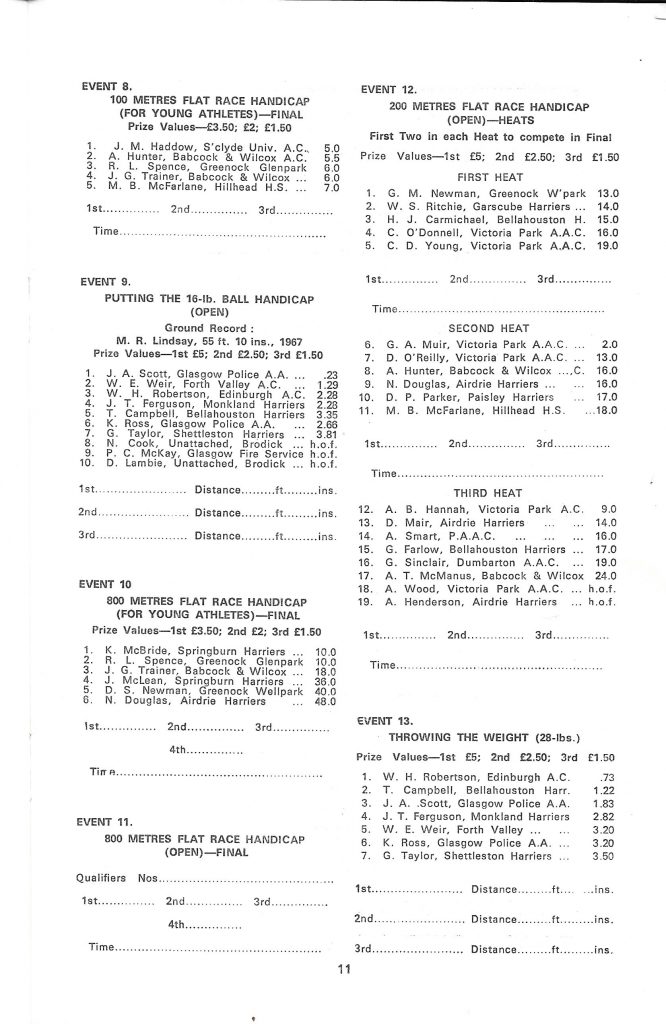 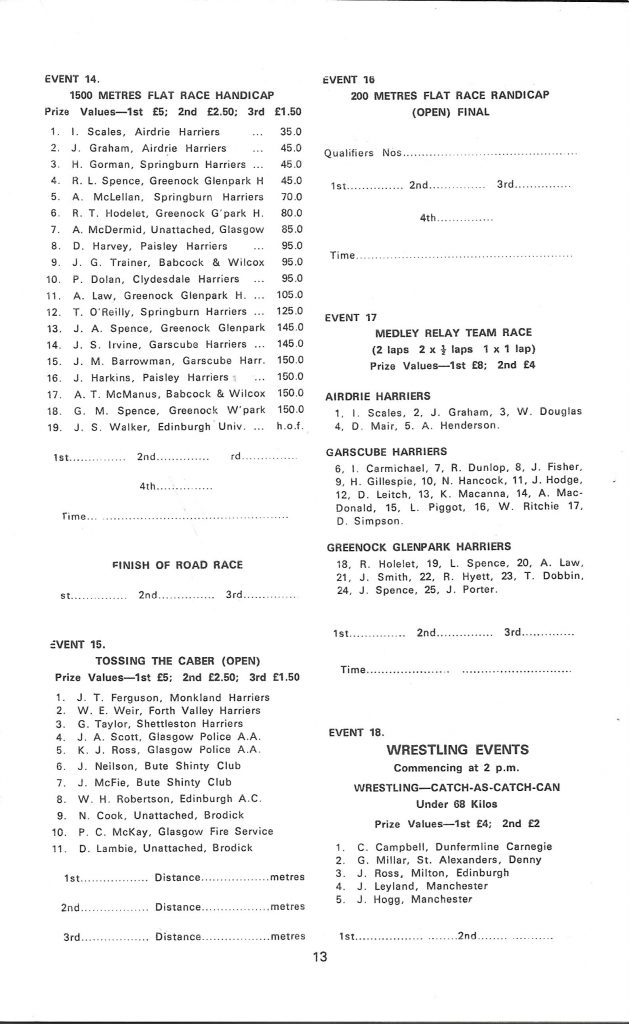 The results as published in the Glasgow Herald on the following Monday: 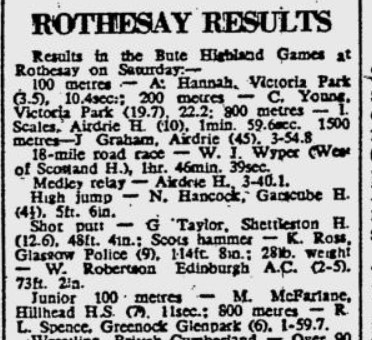 The two big names on that list are Willie Robertson the ‘heavy’ athlete and Lawrie Spence winning the Junior 800m – he would go on to be a sub-4 minute miler and a 2:16 marathon runner and possibly the best ever Scottish endurance runner based on times acr0ss all distances.

The Games declined during the 80’s and 90’s, the road race became a 10 miler and then down to the ubiquitous 10K distance.  The reports disappeared from the Press.  Alas, now that we are in the 21st century, just as at Cowal, there are no light athletics at all the Bute Highland Games.    The programme extract above serves to illustrate the change.  The outline programme for the meeting in 2020 is below. 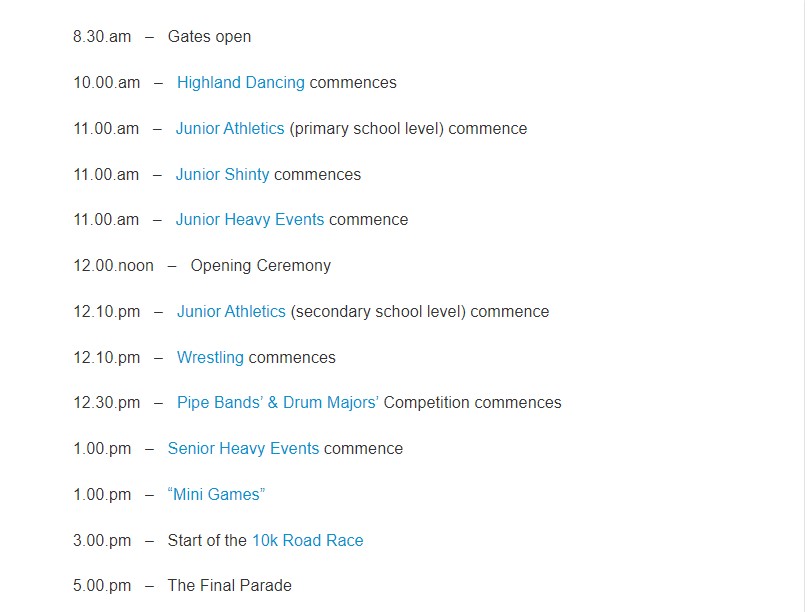 Compare that with page five of the 1971 programme with all the events listed and the extent of the decline in provision of athletics is obvious.   The Games website still says that “All competitions at the Bute Highland Games are run in accordance with Amateur Rules and Regulations.”    Nevertheless the prizes include £85, £65, £45 and £25 for the first four men in the road race and £40 and £30 for the fastest two women not in the first four.  And that was in money.  Compare that with the first three road race awards in 1971 as shown above (note that ‘the prize values were – eg a £5 rose bowl maybe rather than £5):

The decline continues with no road race at all at several meetings (eg Strathallan which went from 20 miles, to 14 miles to 10K to zero) and the sport continues with even track events dwindling in number.   I am glad that I don’t have a crystal ball.