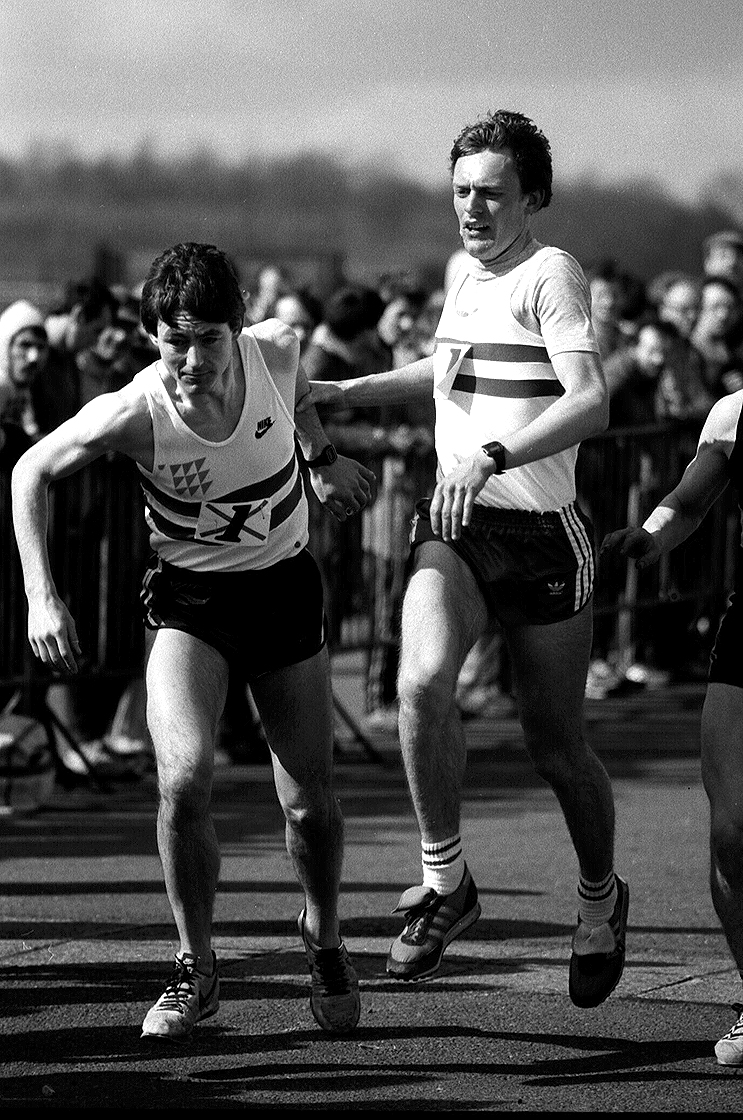 I was quite surprised in the mid-eighties when Mike Murray and Ray Cresswell came all the way down from Aberdeen to run in the British Milers Club races.   To travel 150 miles each way to race for less that two minutes, at your own expense, speaks volumes for their determination.   They were well worth their place in the races and they were highly respected by the other runners.   Both are mentioned in this collection of profiles by Colin Youngson who knew all of the runners mentioned here well.

Graham Milne   a gritty determined runner with a strong finish, first ran the E-G for Aberdeen in 1972, finishing third on Stage One and handing over to Ian Stewart to launch that great athlete on his amazing surge to the finest stage record in the entire history of that event.   AAAC won team silver that year, and Graham played his part (once more on the first leg) when they obtained bronze medals in 1973.   A year earlier, Graham had won team bronze in the National.   After those performances, there was a long wait before his team became competitive once again with the best in Scotland.   In the interim, Graham moved north to Moray District.   He really liked Stage One of the E-G and was third again (for Forres Harriers) in 1978; and second (for AAAC), only two seconds behind Colin Donnelly in 1979.   Then in 1980, Graham won team silver in the Scottish Cross-Country Relay along with Edwards, Clyne and Laing.   He gained another silver medal in 1982 with Ross Arbuckle replacing Edwards.   In the Senior National, bronze team medals were secured in 1982, 1983 and 1986.   Graham’s best individual place was nineteenth in 1980.  It was bronze again in the Six-Stage Road Relay in 1981.   As a veteran, he won team gold in the National Veterans Cross-Country Championships and also in the Alloa to Bishopbriggs Eight Stage Relay (The Vets E-G!)

Aberdeen’s E-G team finished third in 1981 and also in 1982 (with Graham third fastest on Stage Four).   The  scene was set for a real triumph: Aberdeen’s first team gold medal in Scottish Senior events.   Graham was back on the first leg and came in only eight seconds behind second place.   By the end of the next stage, Graham Laing was not far behind the leaders, Bellahouston Harriers, and a race-long battle ensued between those two rivals before Aberdeen squeezed home forty seconds clear, having recorded the second fastest time ever of 3:35:40.   One of Aberdeen’s heroes that day was Craig Ross, who charged into the lead on Stage Four.   (Craig a 2:20 Scottish International marathon man, mainly ran for Dundee Hawks or Fife but this performance was the highlight of his time in an AAAC vest, although he also won the race with Dundee in 1989)

Mike Murray   with his athletic loping stride, looked every inch a track specialist.   Indeed in 1984 he set an Aberdeen AAC record for 800m (1:52.4) and also ran 1500m in 3:50.58.    Mike was a member of the elite British Milers Club.   However, partly because he trained a lot with that hard man, Peter Wilson, Mike also became an invaluable part of his club’s road running team, not only in the 1982 John o’Groats to Land’s End Relay, but also in the Edinburgh to Glasgow which he ran eleven times winning six medals.

Although AAAC won bronze medals in the 1981 E-G, when Mike tackled Stage Three, his best efforts were all on Stage Seven.   It had been obvious during the April 1982 Jogle that he was an excellent downhill runner, and the route on the penultimate stage allowed him a chance to demonstrate speed and flexibility.   Mike could be relied upon to maintain a gap, gain places or extend a lead.   Further bronze medals were gained in 1982, 1987 and 1989 but the finest achievements were in 1983 and 1986.   In both cases Fraser Clyne completed the sixth leg, passed on to Mike Murray and made it possible for Colin Youngson to hold on to the lead.   The result was two gold medals for the north-east club, both won in dramatic fashion.

Mike also won two bronze medals in the Six Stage Relay (1981 and 1989).   Then Metro Aberdeen broke away and Aberdeen AAC struggled in the E-G, although Captain Murray continued to do his best.   Yet he trained harder for a while after he turned forty and, having joined Metro eventually, was part of the team which won silver medals in the 1999 Scottish Veteran Harriers Six-Stage Relay.

Simon Axon   was a Welsh Junior Cross-Country International who moved to Scotland and ran for Inverness Harriers before heading south to live and work in Aberdeen, and to join AAAC.   He made his debut for North District in the 1984 E-G finishing fifth in a high quality Stage One.   In 1985 he turned out for Aberdeen and was given the responsibility of tackling the long Sixth Stage.   His new team finished sixth.   However other key athletes had made their first appearance for Aberdeen in the race that day: Jim Doig and Ray Cresswell as well as Colin Farquharson.   When Chris Hall joined too, the 1986 Aberdeen E-G outfit looked formidable.   Simon moved up three places to fifth on the difficult second stage, only sixteen seconds behind the fastest time.   This allowed Jim Doig to blister into the lead on Stage Three, and eventually Aberdeen AAC won by over a minute.   In 1988, Aberdeen led from Stage Three onwards and Simon kept a healthy lead on Stage Seven which was just as well because the last leg runner had developed hamstring problems and only finished 21 seconds ahead.   Still, that was a second gold medal for Simon Axon and he added a bronze in 1989 when he moved past ESH on the final leg.   In 1988 Simon had finished twenty second in the National Crocc-Country when his team finished third.