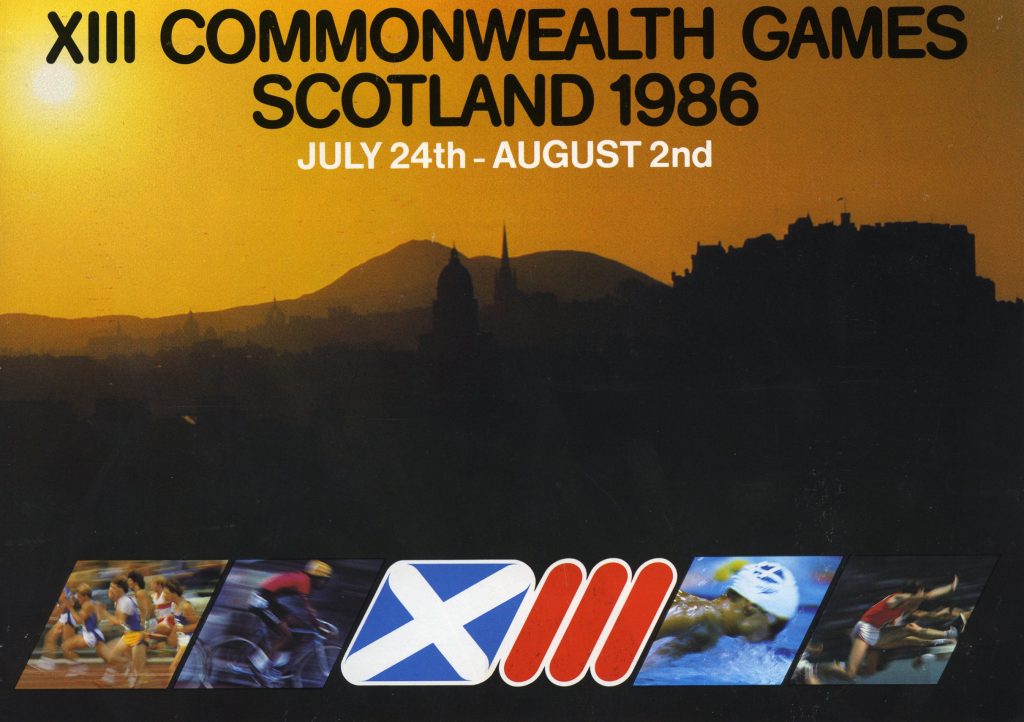 Edinburgh was awarded the 1986 Games at a meeting of the General Assembly of the Commonwealth Games Federation in 1980.   It would the first city to be awarded the Games twice.    The great success of the 1970 Games and the bestowing of the title ‘The Friendly Games’ at that time (which is still being used in the twenty first century) had a part to play in the award, but there were also problems right from day one.

The huge looming problem was the threat of a boycott by the African nations.   There had been two critical meetings resulting in  documents which would be more than just guidelines for the organisation of Sport within the British Commonwealth.   The word British is omitted in the current description of the Commonwealth of Nations, but at this juncture (1986) the role of Britain and its constituent countries, particularly England, in the developments leading up to the 1986 Games was important.   Even today, with the Queen as head of the commonwealth and Patricia Scotland as the Secretary-General, the significance of actions by Britian within the organisation has an influence greater than any other.   The world situation was dominated by the apartheid system operating in South Africa and the sporting boycott of that ountry in order to change the political system.

It was in this atmosphere that the second Edinburgh Games were born.   And it was at this point that the English rugby team decided to tour South Africa in 1984.   This caused the Organising Committee continuing, virtually impossible, problems.   There was a meeting of the Scottish Commonwealth Games Committee on 6th March 1984 in Edinburgh and this was on the Agenda – not for the first time.   The Minute reads:

“ENGLISH RUGBY TOUR TO SOUTH AFRICA.   There was conisderable discussion on this matter and it was decided to write to the Federation requesting that they communicate with the Games Council for England, drawing their attention to the Code of Conduct, especially pp 40/41 where it requests that the Council for England should write to the English Rugby Union and the Government asking that the Tour should not take place. ”

The Tour went ahead and seven matches were played against the South African team.   There was apparently some covert opposition from the government – it certainly wasn’t overt – but the RFU decided it should go ahead although, after the event, they were said to regret that they done so.   No matter, the damage was done.   Despite the best efforts, and considerable efforts were made by the organising committee and the Games Federation, the boycott went ahead.

In addition to the boycott, there were massive financial problems – these are detailed in the first class coverage of the Games by the writers at ‘Scotland’s Runner’.

The government of Margaret Thatcher was more than just unhelpful, it was obstructionist and the refusal of Malcolm Rifkind, Scottish Secretary at the time, in refusing to give any guarantees at all was, to say the least, damaging to all efforts to raise the necessary sponsorship.   This intransigence on the part of the government drove the Games into the arms of Robert Maxwell.   How did Maxwell get involved?   Probably because someone suggested to him that he could become the Saviour of the Games.