(Willie Marshall had phenomenal success as a runner, especially between the ages of 50 and 70. When I won my first Scottish Vets XC title in 1988, Willie became M60 champion. We became nodding acquaintances, but he didn’t say much and, although he was well respected, I did not understand just how good he was. Well I sure do now; and can only marvel at the times he set and the titles he won. It is a real pleasure to profile him properly here. Ed.)

HOW DID YOU GET INVOLVED IN THE SPORT? I saw the local Harriers at Motherwell out and about and thought I would like to do that.

HAS ANY INDIVIDUAL OR GROUP HAD A MARKED INFLUENCE ON YOUR ATTITUDE OR INDIVIDUAL PERFORMANCE? The runners and club officials at Motherwell were very supportive.

WHAT EXACTLY DO YOU GET OUT OF THE SPORT?  I am no longer running due to health issues. However I did enjoy the fellowship, the travelling and the winning!!!

WHAT DO YOU CONSIDER TO BE YOUR BEST EVER PERFORMANCE OR PERFORMANCES? Winning my first World titles in Canada in 1994 at 10k and 25k on the road.

YOUR WORST?  Anything that involved heavy cross country courses !!!!

WHAT UNFULFILLED AMBITIONS DO YOU HAVE? None.

OTHER LEISURE ACTIVITIES? As well as travelling to races, I used to enjoy many family holidays.

CAN YOU GIVE SOME DETAILS OF YOUR TRAINING?  Long slow distance on the road – 50-60 miles per week. Raced every second week and that gave me the speed required.

(These answers provide interesting clues to Willie’s career but far too little detail.)

The first mention I can find of William Marshall in the records is in November 1949, when he ran the First Stage of the Edinburgh to Glasgow Road Relay. He wore the vest of Motherwell YMCA, and it is fair to say that the club struggled at that time. In the 1956 Relay, Willie ran (his favourite) Stage Five, and Motherwell improved to 12th. Marshall ran Five again, every year from 1957 to 1962 – and his club recorded the following placings: 10th, 6th, 5th, 3rd and 1st! YMCA stars included Andy Brown and his brother Alec, Bert McKay, Tom Scott, Davie Simpson and, later on, John Linaker, Ian McCafferty and Dick Wedlock. No wonder they became the top club in Scotland. During their first victory in 1962, Willie Marshall ran Stage Three and gained five places. Motherwell YMCA won again in 1963 and 1964 (with Willie running 3); and in 1965, when Willie ran Five, ended up second to the superb Edinburgh University Hare and Hounds team, led by Fergus Murray. YMCA were third in 1966 (Willie on Three). However by 1967 the bubble had burst, and they finished 16th (with Willie on Four); and in 1968 could only manage 19th, when he ran the First Stage at the age of 40. Nevertheless, William Marshall must have been very proud to have played a stalwart part in the rise and fall of such a splendid club; and to have won three gold, one silver and two bronze medals in the wonderful E to G.

Willie Marshall went on to run for Clyde Valley AC in 1977 and 1978. Then in 1982 both Willie (aged 54) and his son David (a good road runner too, unsurprisingly) were selected for the CV team! Having both parent and ‘child’ taking part in this classic event was very unusual indeed and possibly unique.

Although Willie Marshall was in no doubt that road was his favourite surface; followed by track; and only then country (especially mud), he did finish 58th in the 1964 Senior National, which made him Motherwell’s fifth counter and helped to secure team bronze.

William Marshall must have continued training and racing into the 1970s. The SVHC held their first cross-country championships in 1971, when runners aged 40-49 competed in the same race and there was no M45 category. He must have looked forward to turning 50; and once this had happened, twenty years of greater success began.

In the 1978 Scottish Veterans Cross-Country Championships, William Marshall (running for Clyde Valley AC) won his first title at M50. The following year he lost a close battle with Hugh Mitchell of Shettleston. However Willie returned to the gold standard in 1980 and was champion again in 1981.

When he turned 60, for four years he had no close rival, and (representing Motherwell YMCA once more) won four successive Scottish Veterans XC championships (1988-1991). Between 1993 and 1996 (running for Cambuslang) Willie reigned supreme and won another four titles, in the M65 age group. In total, he had collected an amazing 11 individual gold medals in this prestigious fixture!

“My Dad had been successful before M50, picking up prizes in many events. However after this, more momentum was gained.

Between the age of 50 and 55, he won medals at Scottish and British level, especially on the road and track.

An even greater change was in 1984, when he became European M55 10k road champion in Switzerland. The same year he won the British M55 1500m.

Other highlights included the following. 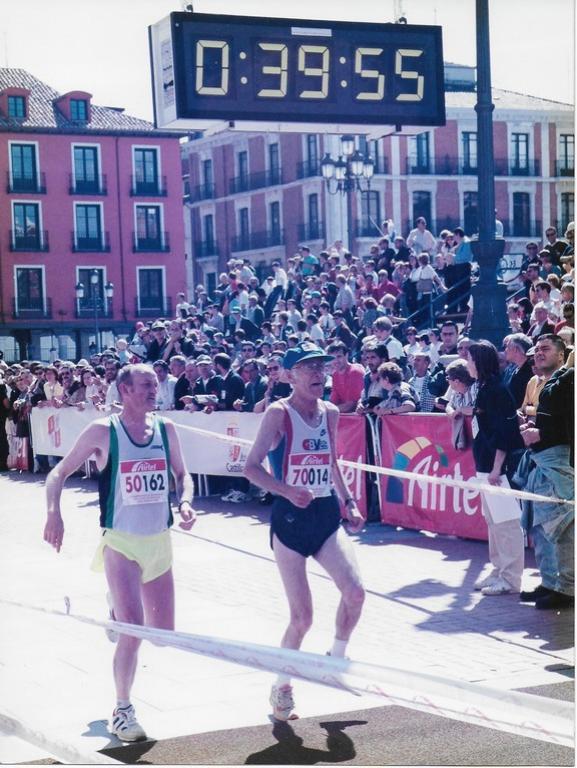 (As anyone who has competed from M50 to M70 will be only too aware, Willie Marshall’s list of titles and very fast times will be almost impossible to match. What an inspiration and formidable challenge for future Masters athletes in those age-groups! His development is interesting: from a club member who trained lightly; to a good club runner who avoided too much mileage but raced frequently for speed-work; to a brilliant veteran, who continued to train steadily and also to race at all distances from 800m to 25km. ‘Train, Don’t Strain’ was the philosophy behind Long Slow Distance. Not a bad notion for anyone wishing to run well after 50?)

Bert McKay, who was a very important influence on the success of Motherwell YMCA, said: “Willie seemed to be a very light trainer but took part regularly in fast pack runs at the club on Tuesdays and Thursdays. He was a nice man, quiet and apparently frail but obviously much tougher than he looked. I remember one particular 5 mile road run I had with Willie just a week before one E to G. I was in good form but could not drop Willie at any time during the run! He was a lot better than he showed when he was younger.”

Peter Duffy (who was a good hill-runner and also won a medal in the Scottish Marathon) said: “I was a team-mate of Willie’s at Motherwell YMCA. On the road he was too fast for me and had a beautifully smooth, flowing style. When I was a club member, he only trained on his own and did not run at all on Sundays, due to strong Christian beliefs. He was respected for this and his fine running in the E to G.”

“I remember Willie Marshall well. When I started running he was my target.

Remember first time I beat him was a 2 mile at Glasgow Green I was pleased although he was 11 years older than me!

One small anecdote. I was competing in a Yorkshire Vets 5K track championship when that fine runner, Gerry Spinks of Bingley, approached a group of us and asked for our assistance in his attempt to better the British Record for the event.

I asked who held the record and he replied, “some Scots guy.”

I correctly suspected it was Willie Marshall so my response was less than cordial.

He failed in his attempt. I think it likely that Willie still holds the British Road 10k record for M70 (which he set at Grangemouth).

I don’t suppose he will remember me but convey my regards.”

“I knew Willie quite well. He was always quiet and unassuming, and seemed to train very slowly, but still produced the speed when it was needed in races.

I remember asking him if he would run at the 1993 Masters Cross Country International in Cardiff. He said he wasn’t a XC runner, and didn’t think he was good enough! However I persuaded him to run and (at the age of 65) he finished 6th M60, a few seconds behind Hugh Gibson and two places in front of Pat Keenan, helping the team to win silver medals.”