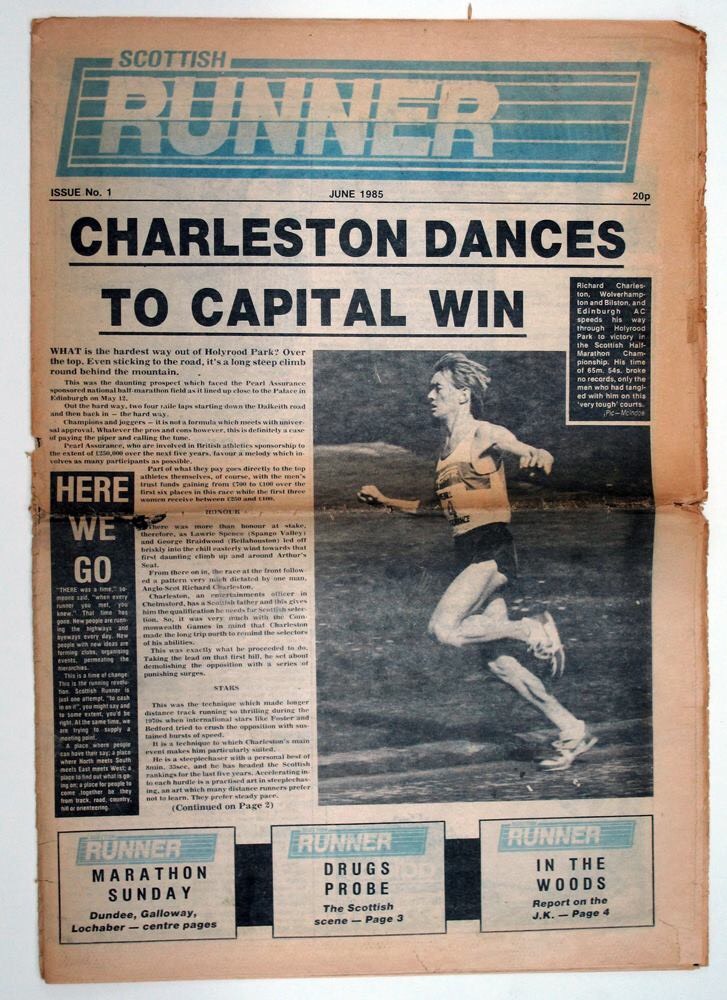 The treatment of athletics in Scotland by the Press over the years has been varied.  There have been many in my brief time in the sport who covered the sport well, or not so well, with Doug Gillon,Sandy Sutherland , Bill Melville and George Sutherland being quite outstanding as both reporter and journalist.      We can look at the Coverage in two categories – that in the daily and weekly papers and that in the specialist magazines that appeared from time to time.

It was not always the case that athletics or any other sport was covered in isolation.   For many decades there were sports columns that covered many sports – running, football, cricket, rowing and others.

(a)  there were sporting papers such as the Scottish Umpire and The Referee which needed copy;

(b)  sports did not demand exclusivity from their members: sportsmen could and often did take part in a number of sports.   The athletics/rugby pairing is well known through the exploits of such as Eric Liddell but the new harriers clubs had members who were also football players (many of the original Clydesdale Harriers were already members of The Rangers, and many Harriers (eg the Maley brothers)  joined up with Celtic when that club was founded.   The papers, as with the general population, were often following the individuals and their sporting careers;

(c) the sport in the beginning had a certain novelty value.

Coverage has fluctuated over the years and the best and most consistent reporting during my time in the sport has been from the ‘Glasgow Herald’ with such journalists/reporters as George Dallas, Ron Marshall and Doug Gillon having a large say in what appeared in the paper.   George reported on sports events pre-war as Ggroe (all sports writers used a nom-de-plume in those days) but he was in the main a reporter.   He continued in this role after the war until Ron Marshall took over the athletics coverage for the paper in the late 60’s.   He was more of a journalist and less of a reporter and after an overlap with Doug Gillon, Doug took over totally while Ron moved to TV working for STV.   In Edinburgh The Scotsman was the paper of record and there were several very good athletics journalists working for it – John Rafferty, Brian Meek, Sandy Sutherland among them but there was no single regular athletics writer.

Given that this website deals almost entirely with the pre-1939 period, then we should give an overview and a  wee flavour of the sport at various points during that period.   Pre-1914, the sports pages covered football (both codes), athletics, golf, hockey, boxing, otter hunting, lacrosse, cricket, yachting, rifle shooting, chess, the turf, quoiting, polo, tennis and more!   The best way to show this I think is to reproduce some columns that cover the range.   I start with the ‘Sporting Miscellany’ column from the Glasgow Herald for summer 1912 and will have a new column frequently.   These are intended to give a picture of the athletics season as it develops and of the relative importance of events given by the coverage and selection.   The writer usually has the short local items first before the longer pieces about sports meetings, championships, Olympics, personalities come in.   Items covered include the Police Sports being professional, Clydesdale Harriers in Clydebank, Queens Park FC Sports being cancelled Hamilton Accies sports being revived, etc, etc.

There is a big demand in the country for coverage of the sport by the written word.   When the SATS Annual Yearbook transferred from paper to the internet, there were groans all round.  The Scotstats.net website is a quite superb resource and one that is not replicated anywhere else – we have much to be thankful for on that score.   But still we have those who remember the yearbook yearning for its return.   This desire for written coverage of the sport can be seen in the frequent attempts to cover the domestic scene in the form of regular monthly, quarterly or just frequently magazines.   Those below are all post-war journals: Walter Ross’s excellent production that lasted from 1946 to 1958 and which was followed by his attempt to continue coverage but boost sales with The International Athlete.   The latter started monthly, went to quarterly and then became infrequent before disappearing.   George Sutherland in Edinburgh in the 70’s produced a genuine coverage in depth of the sport. After that one ceased production, Bill Melville had his go at coverage for us with ‘Scottish Runner’.   Finally there was the ‘Scotland’s Runner’ which was a proper state-of-the-art production with colour, lots of photographs, regular features, fixture lists, detailed results and very good writers but it too went after a life that extended from 1986 to 1993.   The first and last on the list – The Scots Athlete and Scotland’s Runner – have been reproduced in their entirety on the  official website to which the links below will take you.   The others have what we can find of the other magazines.

There are several club and specialist magazines of which the best and possibly longest running has been the “Scottish Veteran Harriers Newsletter”  of which the issues between 2012 and Spring 2020 have been reproduced.   Just click on the link.