Some time after eleven p.m, at a roundabout south of Carlisle, the radio crackles into life and delivers a series of inaudible messages. Blearily, Alastair Taylor peers out of the van window to see several so-called co-ordinators rushing vaguely around. Iain groans, crawls out of his sleeping bag and exits to help. Minutes later Van Three, warning lights flashing monotonously, rolls into view and past. It shelters a scarecrow figure from the inevitable headwind. Francis strides out briskly and demonstrates surprising energy by smacking the roof of an overtaking car as it squeezes past his hip-bone. He waves encouragingly at the rattled driver.

Forty-five minutes to changeover. Angus, looking grey and far from co-ordinated, staggers into the dormobile, climbs straight into the top bunk and flakes out immediately. Bert drives off, one-handed as usual, while Neil chats into the microphone. Charlie Middleton and Alastair struggle to their feet, shove on their crumpled gear and lace up battered training shoes. They pause to shout encouragement at Tony as he fights on down the endless stretch of tarmac. His loose-limbed track athlete’s style seems incongruous in this setting.

Van Four travels five miles down the route and parks outside a deserted garage with a vast car-park. Alastair creaks down the backstep and commences the so-familiar routine, automatic now on his third JOGLE. Stretching exercises up against the van – hamstrings, Achilles tendons, then hamstrings again (try to touch the toes and eventually reach mid-calf). The stiffness is only partial as yet – just wait till the last day, when legs will set like concrete within ten minutes of stopping running.

After jogging around in circles, and a visit to the next field, the adrenalin begins to build up a little. A few medium pace strides, some knee-lifting and Alastair discovers that he can touch his toes again.

The night is mild, the atmosphere invigorating. Pity about the headwind but they ought to be used to it after four hundred miles. Traffic is sparse, so it is easy to spot the travelling fairground moving steadily through the darkness towards them. Green, white and orange, radiating light in all directions, Van Three trundles by, they cheer, and then clamber into their own Van Four which follows close behind.

With ten minutes to go they synchronise watches over the radio, then drive ahead for the final ‘sprints’ before this, the fourth two-hour session. (On the last day of the relay, they will endure seven painful warm-ups in only fifteen hours!)

Sure enough, Francis, the elder statesman, insists abruptly that they take over three minutes early (and who are they and Greenwich Mean Time to argue?) The Van Four Show is back on the road again. Two miles before Kendal in the cool midnight, Alastair soon eases into a stride pattern rather faster (he hopes) than the eleven miles per hour target. The first five minutes in the glare of the headlights seem less effort than usual. Right on schedule Van Four overtakes and he strives to accelerate to his partner and the haven of the dormobile.

Charlie’s familiar figure chugs along like a souped-up traction engine, puffing and blowing rhythmically but generating a lot of power. All too soon for Alastair, it’s his turn again and this time the strengthening breeze dictates treadmill formation. Traffic-permitting the van slips past the runner as soon as possible after changeover, and then tackles the awkward task of providing shelter without hindering progress. Bert is on the stopwatch, lolling indolently against the kitchen sink beside the open rear door. He ‘talks’ driver Neil into the appropriate place where he can see Alastair in the mirror and the runner can avoid asphyxiation from the exhaust fumes. Too close to the back-step, and he will bruise his shinbone and lose pace – too far away and he will lose the windshield and the incentive of ‘chasing’ this mechanical rival. There is only a ten yard gap between these extremes – and to keep the vehicle in the correct position, a delicate touch on brake and accelerator is essential. Neil’s sensitivity to the demands of the job had improved to the extent that self-obsessed paranoid runners like Charlie and Alastair have stopped moaning about his driving. Indeed even the volatile Bert seems content with his co-driver (apart from a couple of explosive outbursts.) It amazes Alastair how little friction there is in Van Four, despite the predictable stress caused by lack of sleep.

As Neil gentles the pedals, Alastair forces adjustments to the speed by means of hand-signals and urgent gasps. Bert muses and occasionally checks the watch. Meanwhile Charlie sweats into Alastair’s towel on the bed, relaxing as completely as is possible in a mere five minutes and, sometimes, glancing without much interest at his partner’s straining figure.

Sleepy Kendal blinks and they are past. The session is gathering speed – the road merely undulating despite the fact that the first sign has been espied bearing the short and ominous place name ‘SHAP’. In past JOGLES, so the legend has it, this well-known mountainous stretch, snowbound and icily windswept, had caused a severe slump in pace, hypothermia and even frostbite! According to the gutter press, this is a ‘crucial crunch crack-up crisis point’ in the relay – but the Van Four men are determined that things will be different this time.

Extra stimulus is provided by Iain, who is timing them from the link car. Typically he invents a fifty yard shortcut across an overgrown roundabout at one a.m. “It’s okay – there’s a faint path!” Alastair steams across and narrowly avoids breaking an ankle on the dimly glimpsed grass tussocks which have to be negotiated after the ‘path’ disappears halfway. Undaunted, the crafty co-ordinator reminds them that they are nearing the mid-point of the JOGLE itself, and threatens to play his dreaded bagpipes to celebrate, if they can pass the landmark. On checking the schedule, Alastair calculates that they can just make it before the end of their stint. The challenge is zany enough to appeal.

Consequently they push harder and stride out faster. Bert and Neil join in the team effort – muttering words of encouragement, driving extra carefully, and grunting diplomatic assent to semi-coherent chatter from psyched-up runners. Van Five makes an appearance, enabling them to bash on, secure in the knowledge that Jim and Alan will take over on time. Three-way wisecracking starts on the radio between Ronnie, Bert and Neil – mutual agitation brought to a fine art by now.

Last half hour, past Shap Village, and the real hills have appeared – long relentless drags winding over the fells. The temperature has dropped with the gain in altitude and a cutting Arctic wind whistles into them, chilling their sweat-stained teeshirts. A grey cheerless place and an insane time to be running. There is an air of unreality about it all – the pool of light sliding along the tarmac behind the floodlit vehicle, the lone figure struggling to keep up, pursued by the shadows of night. Tiredness eats insidiously into the whole body, but can be ignored if the incentive is sufficient – and they really want to reach ‘halfway’ before handing over. Every five minutes is a flat-out effort. Thirty seconds to loosen up and get into full stride behind the van, then fighting on uphill at maximum tempo, fists punching rhythmically, oxygen sucked hard from the icy air until ‘Three minutes gone!” is called. Then an attempt to maintain pace until “Thirty seconds!” when the comfort of the windbreak is brusquely removed as the dormobile accelerates. It leaves the runner alone to stride out of the darkness to his team-mate before bouncing up the step and crashing heavily onto the bed. Purring engine, reeking exhaust fumes, the sobbing of straining lungs, throbbing head, dry throat and a sour smell of perspiration – these are the impressions of a leaden-legged Jogle runner nearing the end of his stint.

An athlete’s sense of time can become acute – and poor Bert is cursed after forgetting the ‘three minute’ signal – a vital psychological crutch for a suffering cripple whose wish for speed is only matched by his desire to rest his weary bones.

At five minutes to two, a weird sound, blown down the wind from a distant lay-by, tortures their ears. As Charlie grinds on up the inevitable slope, Alastair can pick out through the windscreen the unlikely figure of Iain, pacing back and forth in the gloom, piping a piercing pibroch. Without thinking, Alastair bullies Neil into a quick acceleration and jumps out to join a puzzled Charlie. The two of them run the last fifty yards to the ‘mid-point’ of Jogle 1982. Then Alastair completes the final half mile to Van Five.

Exhilarated, they collapse into their dormobile. Ian declares that at his rate they’ll take three hours off the record! (He doesn’t know that they’ll have to cover an extra ten miles missed out on their schedule). The link car departs and the four men gather to share their impression of one of the most satisfactory sections of the relay. Their friendly chatter in this remote peaceful place is disturbed rudely by a commotion in the upper berth. A tousled Angus emerges from dreamless sleep to ask the time and establish his whereabouts. He’s missed the entire session!

Ten hours later near Whichurch in ‘The Bull and Dog’, real ale pub of the trip, they interrupt the hilarity to rush out and cheer their team-mates. Jim and Van Five roll past, en route to their Club’s new End-to-End record (Seventy-seven hours twenty-six minutes eighteen seconds for 850 miles). While Neil, Bert, Alastair and Charlie sip their third pints of Wem Ale, the Jogle seems hugely enjoyable and they wouldn’t have missed the experience for anything. Such is the benefit of resilience and a poor memory! 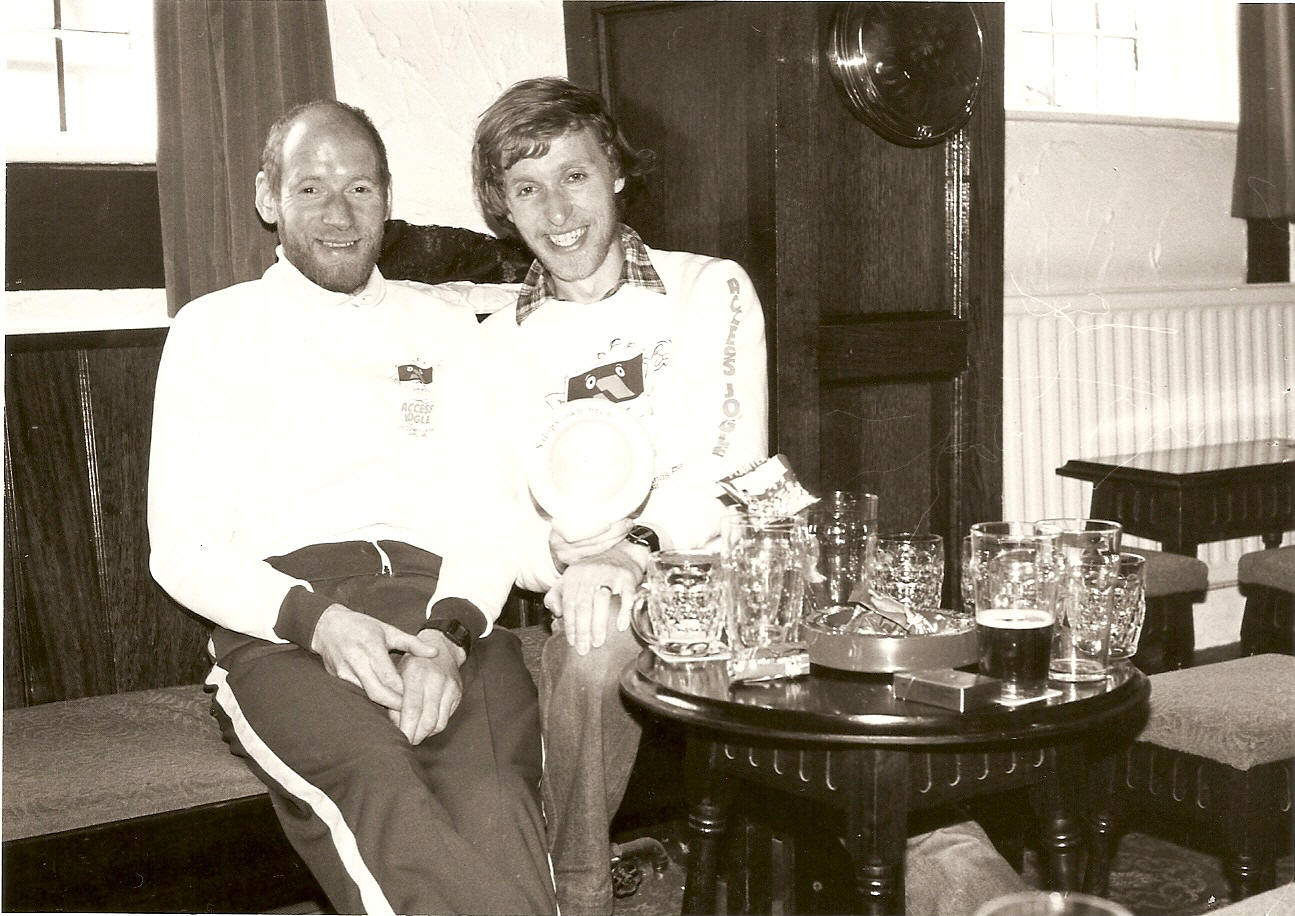 1982: Donald Ritchie and Colin Youngson in ‘The Bull and Dog’, Shropshire.