“On a chilly, but mainly sunny, early spring day, with a strong breeze at times, the runners ran 42 laps of 2.38 km on the North Inch Park by the banks of the River Tay.

In the accompanying 50K event Paulo Natali ran an excellent 3.02.14 in the challenging breezy conditions, with Kerry-Liam Wilson of Cambuslang taking second place in 3.13.45.

The popular Scot thus claimed the Scottish 50K title to add to his many other Scottish championship medals.

K-L wrote that he couldn’t have asked for more from his debut at the Ultra distance (or venture to the ‘darkside’). He was delighted to be a double Scottish Athletics Champion, winning both Senior and Masters 50K titles. 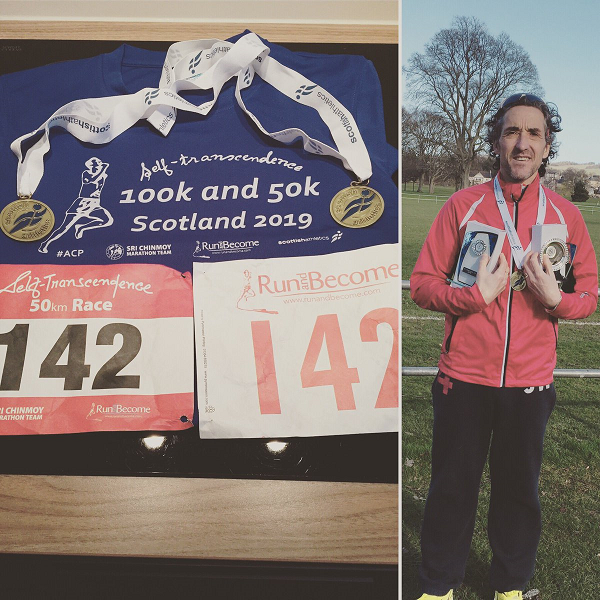 This excellent result by a current Masters athlete, who is closer to 50 years of age than 45, started me wondering about Scots who were successful in long-gone road events like: the Two Bridges 36; the Edinburgh to Glasgow 44 (or 50); the Speyside Way 50km trail race; and the current Scottish 100km and 50km championships. I decided to add the annual Anglo-Celtic Plate International 100km race, which has often been held in Scotland.

Many names must be mentioned; several (especially those active before 1990, have profiles in the Who’s Who section of scottishdistancerunninghistory.scot). On that website, at the foot of the home page, click on ‘The Ultra Marathons’ for more on the Two Bridges, the Edinburgh to Glasgow individual race, and the Speyside Way race.

THE EDINBURGH TO GLASGOW ULTRA-MARATHON (44 MILES)

Gordon Eadie (Cambuslang), who in 1960 had become Scottish Marathon champion, won the E to G three times: in 1963 (37 minutes clear of second place, in a new record 4:51:17, against heavy rain and strong winds); 1964; and 1966 (new record 4:41:27). Gordon was an excellent third in the 1965 London to Brighton; and next year gained revenge on Bernard Gomersall, (who had won the 1965 L to B). Gordon finished more than nine minutes ahead on July 23rd 1966 when victorious in the Liverpool to Blackpool 48 and a half miles race, recording 5.00.22. The award for Scottish Road Runner of the year was the Donald McNab Robertson Memorial Trophy. Gordon had received it in 1960. In 1966 he regained the Scottish Marathon Club championship, for a number of road race successes, culminating in the E to G and Liverpool to Blackpool victories. Jim Alder had won the Commonwealth Games Marathon in Jamaica, and Alder and Eadie were both considered for the Robertson Trophy. Gordon Eadie was selected as the recipient for this honour by five votes to four. Jim Alder was made a Life Member of the SMC, an organisation which achieved a great amount for post-World War Two Scottish distance running. 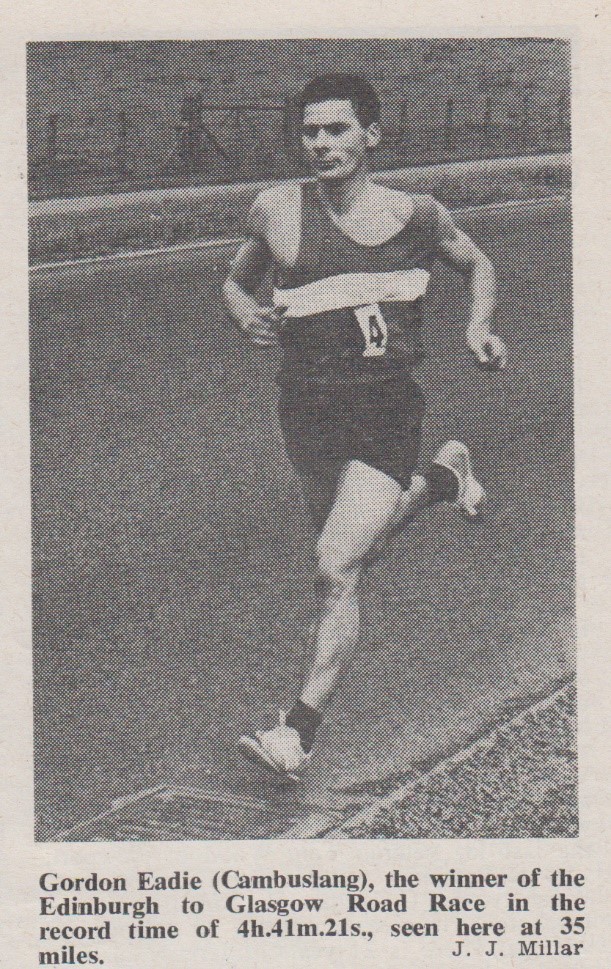 Andy Fleming (Cambuslang) was second in the very first E to G in 1961; and won the event in 1965 (team-mate Willie Kelly was fourth, so Cambuslang also secured the team trophy). Andy was fourth in the 1965 London to Brighton.

Bill Stoddart (Greenock Wellpark H) was second in the 1968 E to G. In 1969, as reigning Scottish marathon champion, he won the E to G, breaking the course record with 4:36:13. Bill and D Anderson (7th), won the team prize. Bill Stoddart finished first again in 1970, but Shettleston (Willie Russell 3rd and J McNeill 5th won the team award on countback from Wellpark (Stoddart and George King 7th). In 1972, Bill Stoddart won the second SVHC cross-country championships and went on to be an outstanding World Champion veteran athlete.

Alex Wight (Edinburgh AC), intending to attempt only a long training run, managed to win the 1971 E to G event. Team-mate John Gray was sixth so EAC won the team award. Alex went on to win the Two Bridges 36 in 1971, and won again in 1972, breaking the record with 3:24:07. He and his brother Jim (second), plus Jimmy Milne (9th) won the team prize.

Jimmy Milne (EAC) won the 1972 E to G. This was, apparently, the 12th and last of the event series. He also contributed to EAC winning the 1972 Two Bridges team award.

Donald Ritchie (Aberdeen AAC) was an easy winner in the one-off 1984 E to G, which now started at Meadowbank Stadium, with the overall distance increased to 50 miles. Don’s finishing time was 5 hours three minutes 44 seconds, which was relatively faster than the record for 44 miles. Donald’s team mate Colin Youngson was third, behind EAC’s Dave Taylor, so Aberdeen won the team award. Back in 1977, quite early in his wonderful ultra-distance career, Donald (Forres Harriers) finished second in the Two Bridges 36, a race which he won in 1983, 1986 and 1990. 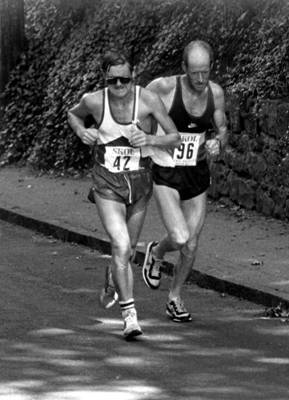 The first Two Bridges took place in August 1968, and the victor was Don Turner, an Englishman who ran for Epsom and Ewell, but for Pitreavie AAC when he lived in Scotland between 1959 and 1964. Don had been a close second in the 1962 London to Brighton 52 miles race. He finished third in the 1968 Scottish Marathon championship; and later became President of the prestigious Road Runners Club.

In 1969, Alastair Wood (Aberdeen AAC) became the first Native Scot to win the Two Bridges 36, in the record time of 3:27:28. Then he broke the World 40 Miles Track Record. Three years later, in the 2B, Alastair was a minute ahead of the field when a marshal went missing, sending the leader off course, so he finished third behind the Wight brothers – Alex won, with Jim second. However, two months later, Alastair Wood won, and smashed the record, in the famous London to Brighton 52 miles road race. A year later he was second in the South African Two Oceans (Indian to Atlantic) 35 miles event near Cape Town.

Jim Wight (Edinburgh AC) was second in the 1969 Two Bridges; second again in 1972; and won the race in 1974. He ran for Scotland in cross-country and the 1974 Commonwealth Games marathon.

In 1991, Andy Stirling (Bo’ness Road Runners) finished first in the Two Bridges. Later that year, he represented Scotland in the Home International 100km race near Edinburgh. Andy won the 2B again in 1993.

Peter Baxter (Pitreavie AAC) won the Two Bridges in 1992 and, along with clubmate Kenny (or Archie) Duncan, who was second, and Paul Swan (7th), the team title.

Simon Pride (Keith and District AAC) won the Two Bridges with ease in 1998. In May 1999, running for GB, he triumphed in the World 100km road championship, with a superb UK best road time of 6:24:05. He was Scottish Marathon champion four times.

Alan Reid (Peterhead AC) won the Two Bridges in 1999. His finest ultra-running achievements include: Gold (2001), silver and bronze medals in the British 100km Road Championships, the Scottish 50km title in 1999 and 2000 and winning the Barry 40 miles track race in 2001.

The only Two Bridges Scottish team win, which has not been mentioned above, was by Fife AC (Ian (or Sam) Graves, Dave Francis and Ian Mitchell) in 1983.

Trudi Thomson (Pitreavie AAC), such a versatile runner, won the 2B Women’s race three times and held the course record. Her finest ultra-distance performance, running for GB, was a silver medal in the World 100km road championships in 1994, by Lake Saroma in Japan. Her time of 7 hours 42 minutes and 17 seconds still stands as the Scottish record and third on the UK all-time list. In 1999, running for Scottish Masters, she won the W40 British and Irish International Masters cross-country championship. In 1992 and 2001 she won the Scottish Marathon. 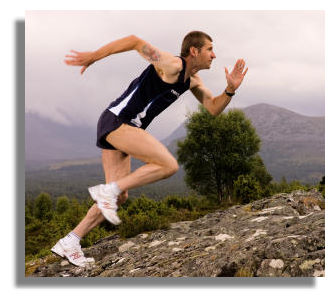 This was held, in April, 11 times between 1994 and 2005. The route followed the Speyside Way from Ballindalloch to Spey Bay. To accomplish the full distance a deviation of approximately 5km commenced on the descent from the forest track off Ben Aigen, to the east of Boat O’Brig. The track from Bridgeton Farm was taken to the right, onto the B9103, past the Distillery, and then next left onto a road through the Moss of Cairnty. The Speyside Way was resumed on the Ordiequish road. After skirting round Fochabers, the final stretch was a track by the river Spey to the Moray coast at Spey Bay. Altogether a safe and very scenic route. The event was devised and organised by Donald Ritchie, with considerable assistance from volunteers.

Andy Farquharson was second in 2005.

In 2009, David Gardiner of Kirkintilloch Olympians was second.

Ross Houston (EAC) created a new record (2.56.37) in 2016, from Mark Pollard of Inverclyde. Ross was Scottish Marathon champion in 2011 and 2012; and represented Scotland in the 2014 Commonwealth Games marathon.

Women’s Champions include the following.

For some reason, results online are even more incomplete

1992 was the first Scottish title that the legendary Donald Ritchie ever won! Aged 48, he recorded a fine time of 7.01.27, with Ian Mitchell (FMC Carnegie) second. N.B. Donald Ritchie has been inducted into the Scottish Athletics Hall of Fame.

In 2010 Grant Jeans (unatt) won from Dave Gardiner of Kirkintilloch Olympians. Grant was a confident 26 year old from Elgin – a boxing enthusiast who worked as a journalist and part-time postman in Glasgow. He was first Scot to finish in the 2010 Anglo-Celtic Plate 100k; contributed towards Scottish team victory in the 2011 Plate; and won the Welsh classic ultra (Barry 40 Mile Track Race) in 2012 and also 2015.

(N.B, Adrian Tarit Stott (Sri Chinmoy AC) is based in Edinburgh, and has competed for Great Britain in World and European 24 hour Championships, has done an incredible amount for Scottish and British Ultra-Distance Running. He has run the West Highland Way race 15 times, which equals the record. (Do go to West Highland Way Race History to discover a great website, featuring many top Scottish ultra trail racers). In 2018, Adrian was presented with the Tom Stillie Award, which is given to the person who has contributed the most to Scottish Athletics each year.) 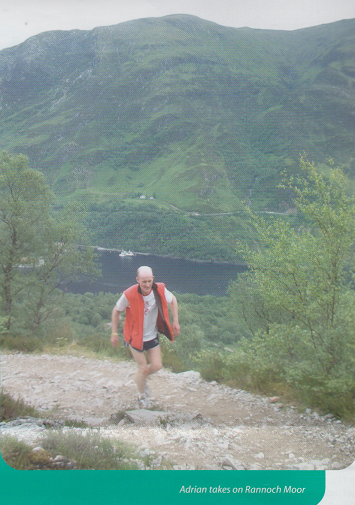