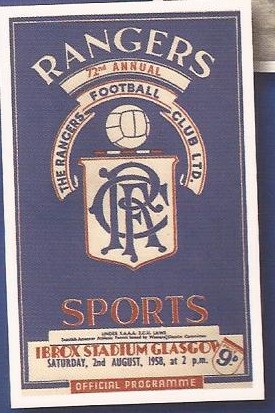 1952 was Olympic year; it is often described as the’last real Olympics’ because it is seen as the last where true amateur values and the Olympian spirit appeared.   They were certainly a magnificent Games from the point of view of the standard of competition.   Being so close to the venue of Helsinki, Scotland had an attraction for the competing countries, many of whom had had athletes competing in earlier years at the Celtic Sports, the Rangers Sports, and then at the Edinburgh Highland Games.   The country and city were well known in athletics circles.  So it came about that there were three huge sports meetings in Scotland in 1952.   The Glasgow Police Sports were held that year on the last Saturday in June and had no fewer than 15 invitation events of which were 11 were for men, 3 were for women, and one was a schools relay race.   Athletes from Britain, America, Canada, Australia and New Zealand were all competing and sharpening up for the Games which began on 19th July.   The Rangers Sports were on 2nd August and had a host of athletes from the Olympics, not exactly the same as at the Police Sports – for instance the Australian women called off by telegram on the Thursday before the meeting but it did have the advantage of knowing who had won the events and could name the gold, silver and bronze medalists.   And finally the other big meeting at the time was The Edinburgh Highland Games on the short Murrayfield track two weeks later.   By now the Australian and New Zealand women had arrived in Scotland but some of the others had departed.   Remember that the grass track at Murrayfield was not of a standard distance, and the races were run on grass. 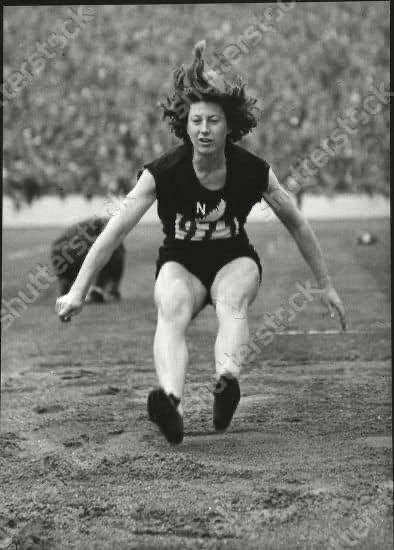 Yvette Williams, NZ, who competed at the Police Sports,  and then broke the world record when winning the long jump in Helsinki returned after the Games for the Edinburgh Highland Games, following this with Cowal Highland Games the following Saturday!

The Police Sports were held at Ibrox on 28th June and with competitors from Australia, New Zealand, Jamaica, and all over Britain it was no real surprise when six Scottish all-comers records were broken.   With a crowd estimated at 38,000 on a good afternoon, and on the fast track at Ibrox, there were good times all round.   In addition the proliferation of top names and the teaser of guessing who would win medals a month later in Finland had the crowd entertained.   Each of the three women’s events would be won by athletes who would win gold – Marjorie Jackson in the 100 yards would win both short sprints, Shirley Strickland in the 80m hurdles and Yvette Williams would win the same events a week later.   For the men, Rhoden of Jamaica won the same event and other medal winners were there in numbers with the spectators particularly excited by the Jamaican 4 x 400m relay team which was comprised of the four men who would win the Olympic relay – Laing, Wint, McKenley and Rhoden.

The superb reslts are above, but no matter how high the quality or how renowned the athletes, the Police Sports were BEFORE the Games and no matter how good the athlete, the addition of Olympic gold or silver adds extra lustre.    In addition, there were no Americans competing in June and they had always been favourites with the Glasgow public.

The Rangers Sports of 1952 was the first big athletic meeting I had been to.   I was 14 years old and after local meetings like the Singer’s Sports it was a completely new experience.   Singer’s was a good local sports and one where they had the ocasional top class runner from England (eg June Foulds of the AAA) as well as some very good Scots.   The ground was small but it was usually full but the Ibrox meeting was just so different.   The size of the arena, the size of the crowds (50,000 in ’52) the whole infield was swarming, or so it seemd to me, with athletes competing in the field events, and there was the  glamour of all these champions from America and England as well as the domestic Scots.   If Singer’s Sports was the typical bread and butter meeting for athletes, the Rangers Sports was the apex.   In 1952 the weather was very good indeed, the spectators knew what to expect, even if many had come for the 5-a-sides they knew a bit about their athletes and could appreciate quality when they saw it. 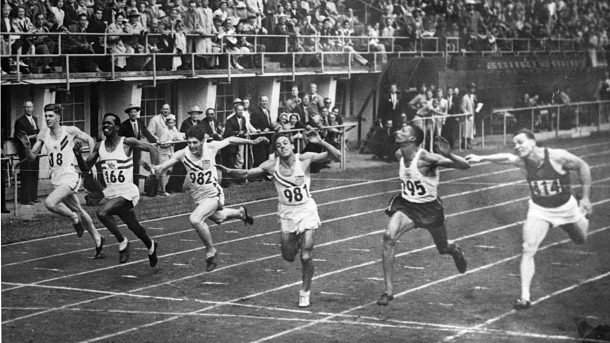 Lindy Remigino (981 above, winning the Olympic 100 metres) was one of the star turns – he had won the Olympic title from Herb McKenley of Jamaica and Britain’s MacDonald Bailey and all three were running in Glasgow.   Mac Bailey also ran in the special 120 yards race to give the public two of the first three in the Helsinki 100m in action.   Running inot  a headwind of 6 feet per second, Remigino defeated Bailey by 1 1/2 yards in 11.8 seconds.  Here’s an interesting fact – the runners in this special invitation sprint had to run in heats and the American won his heat in 11.2 seconds which, as the Herald pointed out, was still remarkable even with a following breeze of 8.5 feet per second.  That wind was 2 feet a second more than was allowed and his time was not recognised as a British record.   Third in the race was Jamaican Byron La Beach – a man very unlucky not to have an Olympic gold medal: the Jamaicans had a group of five 400m runners, any four of whom could have been in the relay team, in any other country they would have been.  On the day of the final, the team was Wint. McKenley, Rhoden and Laing.   They won in record time. 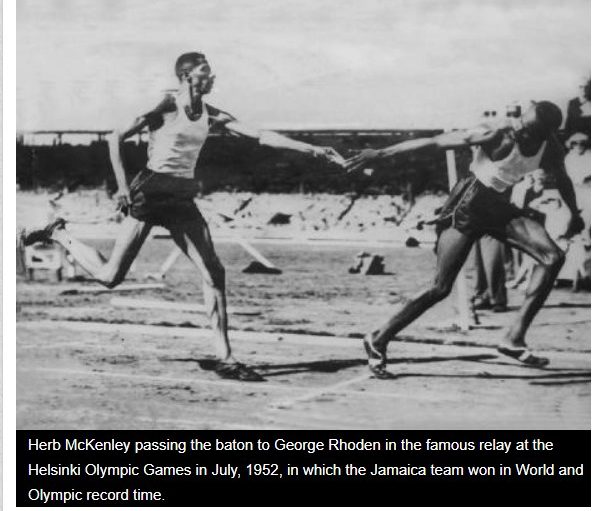 The Jamaicans had a wonderful Olympics in 1952.   One of their outstanding squad of runners was Herb McKenley, known possibly better as a 400 metre runner, he was also a class sprinter.   Second in the Olympic 100m, he was also a member of their 4 x 400m relay team.   McKenley ran in Glasgow that August and after running in the 120 yards won the 220 yards from Remigino and fellow Jamaican J Laing in the very good time of 20.9 seconds which was two tenths inside the British record and five tenths inside the Scottish record.   And he did it in the outside lane.   Third was another Jamaican 200/400 runner called J Laing.   He did have a gold from the Olympics.

The invitation 440 yards was won by one of England’s best, PG Fryer running from a handicap of 14 yards, but Jamaican GV Rhoden, from scratch ran 46.8, which was faster than Arthur Wint’s British record of 47.2 and nine tenths faster than the Scottish all-comer’s record held jointly by Wint and McKenley. 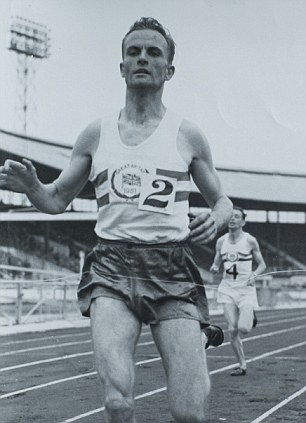 Bill Nankeville was one of England, and Britain’s, best and ran in both 1948 and 1952 Olympics and in 1952 made it through to the semi-finals where he was ninth.   He didn’t make any mistakes in Glasgow though where he ran in the Invitation three quarter mile beating Seaman of AAA’s and Landy of Australia in the process in a time of 3 min 00.4.   This was 5-10ths faster than Wooderson’s of 15 years earlier.

The Mile Invitation medley relay was one of the meeting’s high spots with the Americans (Olympic 4 x 100 metres champions) against the Jamaicans (Olympic 4 x 400 metres champions) and a very good AAA’s team.   Wint, silver in the Olympic event, Nankeville and G Barnes of the USA (an Olympic semi-finalist in the 800m) contested the half mile stage to set the event off and at the finish Jamaica defeated the Americans by a mere two yards in 3:25.9 – beating the joint Edinburgh Southern Harriers and Glasgow University jointly held all-comers record by 5.8 seconds.   The Jamaican team of Wint, La Beach, Rhoden and McKenley differed from the Olympic winning team only by the substitution of La Beach for Laing, while the American team had Barnes, Remigino, Gourdine and Pearman – Gourdine won Olympic silver and Pearman was also an Olympian).   All four of the Jamaican Olympic team ran at Ibrox that day – Laing in the 220 yards.   It was a pity that Bill Jack of Victoria Park who had been in the GB relay team in Helsinki was not part of the quartet in Glasgow which consisted of Nankeville, Shenton, Bailey and Derek Johnston. 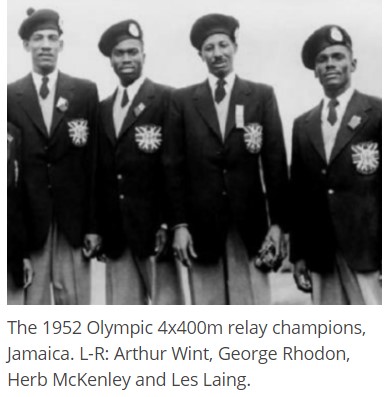 The quality of the athletes competing at Ibrox that day was astonishing by any standards – the Olympians just kept appearing, and if if weren’t Americans winning, it seemed to be Jamaicans.   The inspirational aspect is obvious, but the educational aspect for the domestic athletes was also considerable – any sprinter not watching and learning from the likes of Remigino, McKenley and company was not worth his salt.   As for the field events, look at these events.

Eleven invitation events, over two dozen Olympians, every invitation event had three or more from the Olympics and most had two medal winners.   The open events were more than well supported and many of the times, heights and distances were of a high standard too.   The complete results were as follows, but you will see that the women are noticeable by their absence.   That was not for want of trying but the last day of the Olympics coincided with the Rangers Sports and the women withdrew from the event. 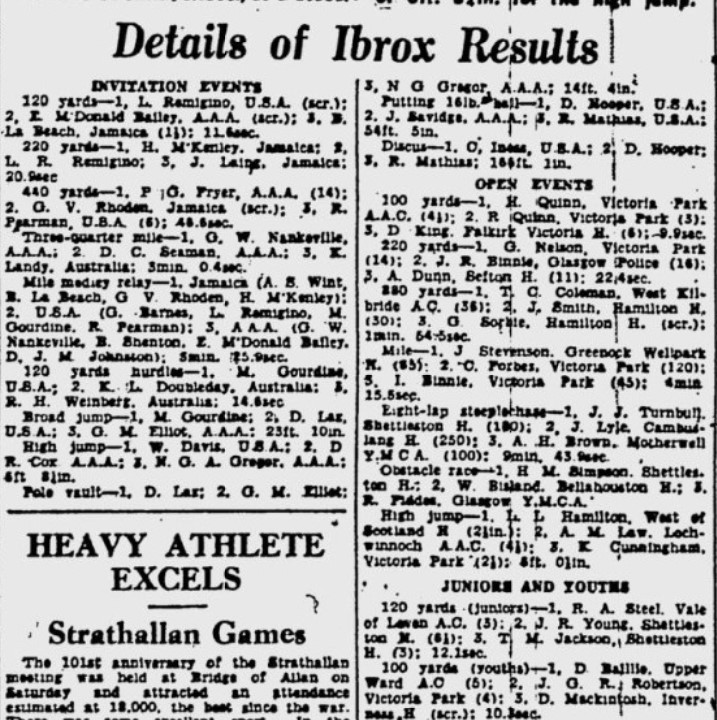 Edinburgh’s  Highland Games took place on 23rd August on the short, grassy track of Murrayfield but there were still three all-comer’s records.   It was another superb meeting before an audience of 50,000 and with athletes from Britain, America, New Zealand, Australia, Belgium, Germany, Jamaica, and Holland.   There were four women’s events with two – 80m hurdles and long jump – won the the olympic gold medalists in these events, plus a 100 yards and 220 yards which were both won by Holland’s Brouwer who had been second to Marjorie Jackson in the events.

Olympic champions at Murrayfield that day:

There were also several bronze medal winners and many unplaced athletes. 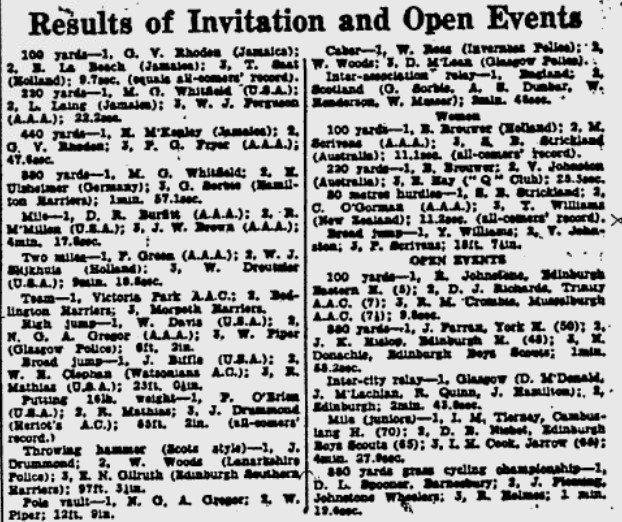 The Rangers meeting was of course organised by the indefatigable Bill Struth, by then possibly at his very best as a promoter, and the Edinburgh meeting by Willie Carmichael, the wonderful organiser who won the 1970 Commonwealth Games for Scotland.   Both top class administrators, they each had estimated spectator turn outs of approximately 50,000, while the Police version had 38,000 present to see these exotic foreign athletes competing against each other and against the local stars.   138,000 in total for three meetings.