Peter Fleming was at the top of Scottish marathon running for 17 years and for most of them he was top ranked Scot in the distance and at times holding the top two, three or four times in the same year.   For example look at his record in the 1995 in the table below where he had three times of 2:16 or better.   Like most of the top runners of his generation he travelled far and wide in search of competition and times but eventually he did most of his running in America and he is currently settled in Boulder, Colorado.

To begin with he was one of a very good group of young endurance runners from Bellahouston who all went on to become first class marathon runners – Andy Daly, Graham Getty, George Braidwood and Peter all ran sub 2:20 for the marathon and had good careers as cross country runners as well.   Peter however has clearly been the best in terms of times run and victories all over the world in many classic marathon races.  He became a specialist marathon runner and he must be regarded as one of the most consistent of the top marathon men of the twentieth century.   Before looking at his progression let’s start with a young (22 year old) Peter Fleming answering the SMC Questionnaire in May 1983.

How did you get involved in the sport initially?   When I was about 10 years old my father made me run 100 metres which I did in about 16 seconds.   He told me that men could run 6 seconds faster and ever since I have tried to run as fast as possible over every distance I attempt.

Has any individual or group had a marked effect on either you attitude to the sport or your performance?   Yes, myself.   Being able to discuss within myself (as I am self coached) my training schedules and racing performances in a critical way and in a way in which I can bring about peak performances for certain races that I feel are important.

What exactly do you get out of the sport?   The feeling of euphoria and speed after a good training session or race and the overall feeling of fitness and health.

Can you describe your general attitude to the sport?   To get as much out of athletics as I possibly can and while I can.

And your worst?   The 1982 Glasgow Marathon for not winning it.

What do you do apart from running to relax?   Sleep.

What goals do you have that are still unachieved?   To receive an international vest and to go under 2:15 for the marathon.

What has running brought you that you would not have wanted to miss?   Self confidence.

Can you give details of your training?

A typical week’s training for the Glasgow Marathon:

So where did this confident young man go from there?   Was his confidence misplaced?   Was his estimate of his ability totally wrong?   The figures show that he was spot on in fact.   In 1995, maybe his best year, he had the top three marathon times by a Scot and topped the half marathon list as well as the 10,000 metres on the road.   So how did he get from being a promising young runner to the top Scottish road runner for six years in succession?   His annual progression might be interesting in this respect. 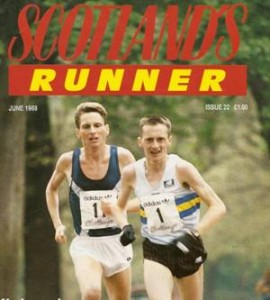 So after a promising start between 1981 and 1986 he took four years without a marathon while his track times for 5000 metres and 10000 metres improved.    Now have a look at his times and rankings within Scotland from 1992 to 1997.  It was a bit of a purple patch where he had total domination of the Scottish marathon scene, albeit that most of the runs were done outside Scotland and steadily gravitating towards the USA.   What follows are the bare statistics from what I regard as his real top class running and racing as a professional marathon runner.   From the days when Duncan Robertson could not take time off work to compete in the Olympics we now have the first Scottish athlete to make a career as a professional athlete.   To me, his best year was 1995 but in this five year period period he ran at least nine marathons with only one as slow as 2:20:00, at least five half narathons inside 65 minutes and was ranked in the GB lists at 3000 metres, 5000 metres, 10000 on the road and 10 miles on the road.   Even during this period he would turn up at the Kelvin Hall on an open graded night and do the 3000 metres – on one occasion when Des Roache was running 1:49 for 800 metres and mid 3:40’s for 1500 he offered to share the pace so that they would both get a good run out of it.   As Peter Coe is said to have said, “If speed is the name of the game, never get too far away from it.”

(Note that, in 1993, his GB team won bronze medals in the World Marathon Cup.)

As Scotland’s first real professional marathon runner with more really top class times (ie sub 2:20) to his credit than most it is unfortunate that he never competed in any major Games – Commonwealth, European, Olympics and World Championships all eluded him – and that may be the price that the top men and women have to pay nowadays but I can’t help regretting that his name does not appear even once on the list of Scottish Marathon Champions.