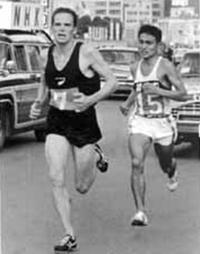 Mike has had a fascinating career in athletics and it will take more than a page to do it justice so the plan is this.   I will start with a resume of his career as an athlete, go on to look at how he is regarded in New Zealand then report and quote from his own words in emails and phone calls.    The Mexican feat is of real interest to all endurance enthusiasts – how did he win a medal in the marathon when no other sea level athlete had won anything nor even done himself justice?    So that is covered in a separate section called Mike in Mexico. 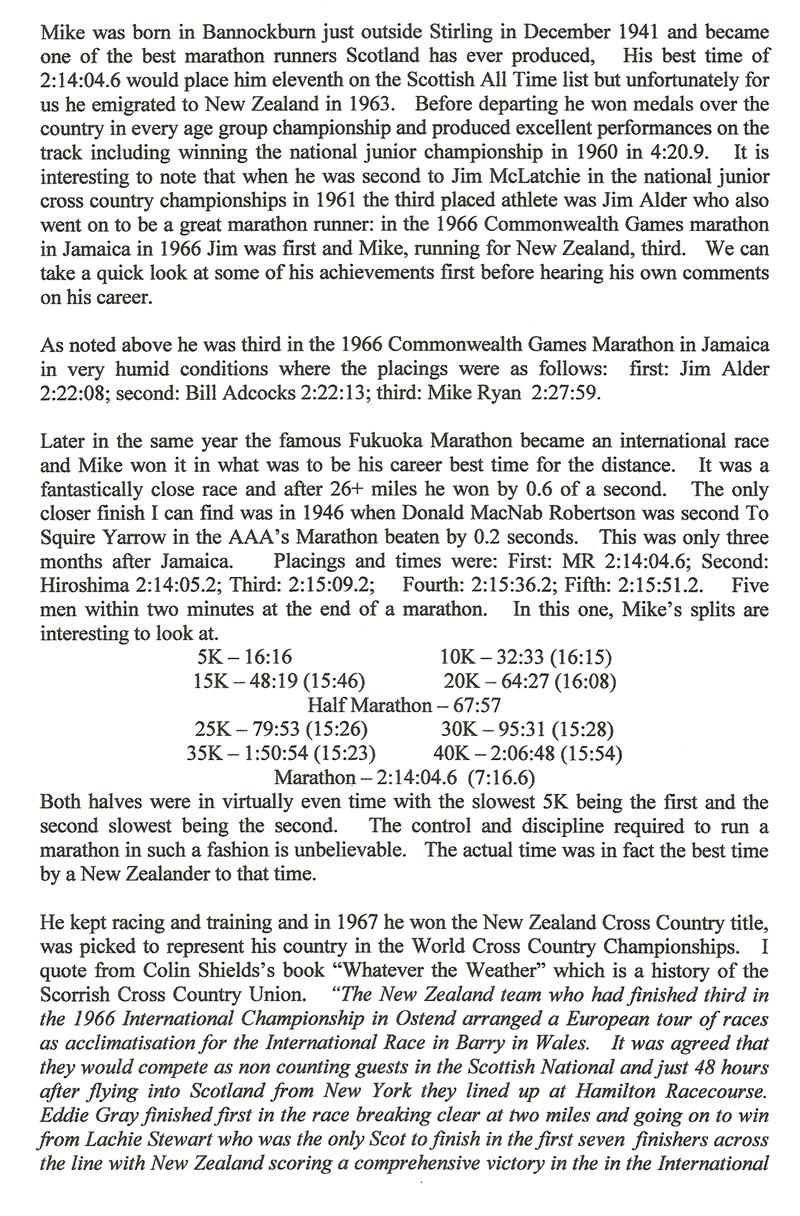 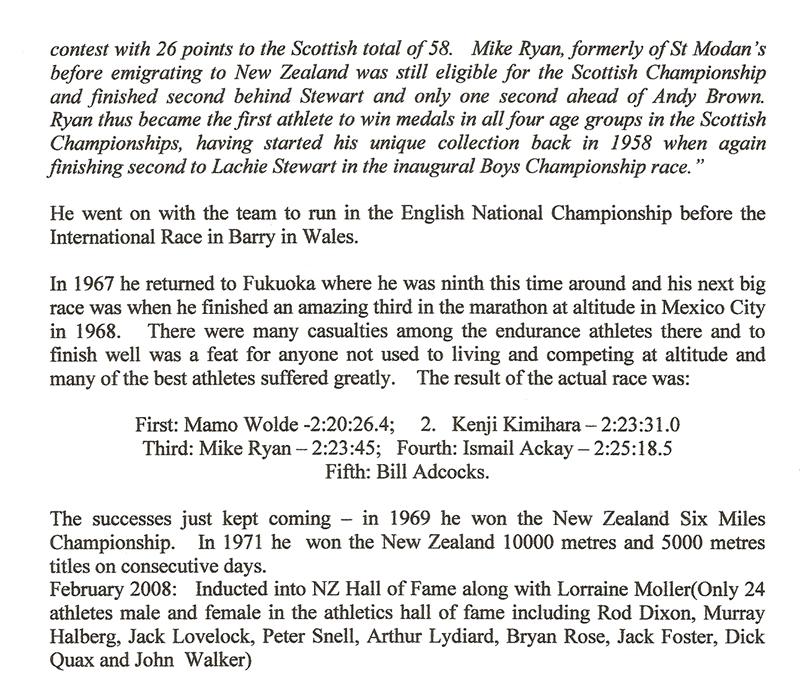 That’s the best I have found so far but they are all considerably good times today and were quite outstanding in the 1960’s. 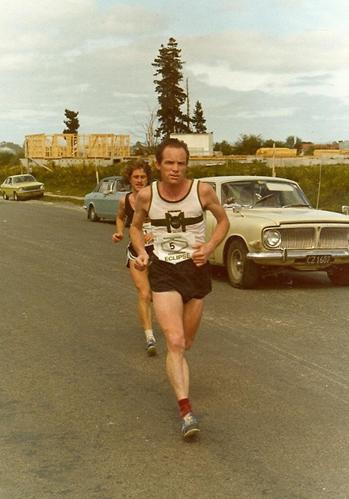 There is a short but interesting entry in the New Zealand pages which covers his career from a different angle and it can be found at www.olympic.org.nz/AthleteProfile.aspx and I’ll quote some of it here.

“Quite why Mike Ryan’s performances have been so underplayed down the years is difficult to understand.   Perhaps the Waikato based Ryan missed out on some of the media attention because he did not live in a main city.   And perhaps because he won bronze medals not gold he did not capture the headlines.   Whatever the reason there is no doubt that Ryan was a marathon runner of the highest class.   He ran at two Games – the 1966 Kingston Empire Games and the 1968 Mexico City Olympics – and returned with unlikely bronze medals each time.

Could there have been two more challenging runs?   In 1966 he had to contend with the torrid Jamaican heat that melted the chances of so many of the marathon field.   Two years later the altitude of Mexico City (situated 6000 feet above sea level) wrought havoc with the distance runners from sea level countrues.   African athletes dominated the distance events at Mexico City which makes Ryan’s marathon bronze all the more astounding.   While such great athletes as Australians Ron Clarke and Derek Clayton were destroyed by the altitude during these Olympics, Ryan ran with incredible grit and determination to earn his medal.

…………..[ After emigrating] once living in the Waikato, Ryan soon hooked up with John Davies who introduced him to the Arthur Lydiard training methods.   Davies helped Ryan build the endurance that would stand him in such good stead when pitted against the world’s best marathoners.   Ryan was much more versatile than is commonly acknowledged.   In 1967 he won the National Cross Country Championships and represented NZ at the world championships.   He won NZ titles at 5000 metres, six miles and 10000 metres and finished fifth in the 10000 metres at the first Pacific Conference Games in Tokyo in 1969.   But it was as a marathon runner that he achieved most.

Ryan’s Olympic medal was not without cost.  He maintains that the effort required to run so fast for so long at altitude affected his health for many years afterwards causing him to feel continually sapped of energy.”

What follows are some extracts from emails and a telephone conversation with Mike over December, January and February 2010.

He started running in School where he led a very active life and he also did a lot of biking and rock climbing.   At St Modan’s AAC he was coached by Jimmy Kielt who was a contemporary of Joe McGhee.   Jimmy had him doing a lot of repetition training and his aspirations were to beat runners such as Lachie Stewart, John Lineker, Fergus Murray and others.   In the early 1960’s he was invited to a squad day at Redford Barracks and a weekend at Inverclyde with potential Commonwealth Games athletes.   The group also contained Ming Campbell, Mike Hildrey and Fergus Murray among others.   When he left school he worked in the Alexander’s Bus Garage at Fallin before his brother got him a job in the Lake District as an athletics and climbing instructor.   At this time he was applying for a variety of jobs in various places including the Falklands before going to NZ and settling in Tokoroa which is small mill town with about 6000 inhabitants.   He was a hard and frequent racer and won several 3000 metres races.   Vladimir Kuts and the Press sisters were living there at that time.   He cannot over emphasise the influence of some of his friends at that time and mentioned in particular Bill Sutcliffe (with whom he made a journey to Everest Base Camp some years later and John Davies the former Olympic 1500 metres runner (two bronze medals) who was a very good coach and motivator who went on to coach Dick Quax and other international athletes including Lorraine Moller.   It was only a mill town but many people came or passed through from all over to train with the club.

The training he did was a routine season by season, year by year regime dictated by the racing programme.   “I never considered myself a marathon runner rather one who ran and enjoyed all disciplines.   I ran probably about 35 – 40 marathons.   However I was a frequent racer at other distances from 800 metres club nights to and through all distances on track, road and cross country.   Before the start of the cross country season we have some exacting ten man relays.   The track season from November to March is usually interval training – mainly but not solely on grass tracks.   The early part of this period would often consist of 100 metres shuttle dashes plus 200 and 400 repetitions – 20 – 30 with 200 metres recovery.   {see the section on Mike in Mexico}   There would also be a session of 3000 – 5000 fartlek.   This would be done as well as half to three quarters of an hour run before work in the morning.   There was a period when a third daily run on cross country was possible at lunchtime.   Throughout all training the execution of a long weekly Sunday run 0f two and a half horus would be done, even when we went away.   The wisdom of John Davies imparted to us in the early days was marked.   Collective training and racing were significant as well as socially edifying.   Early on under JD’s tutelage the companionship of group training, travelling and racing was not underestimated.   The competitiveness with each other, inspiration, advice, reassurance with resultant ambition pervaded the club.

In NZ national representation is seen as a big thing and to compete internationally is seen as a significant honour – especially in a small town like Tokoroa.   While I enjoyed training racing was very important.   I relished the thought processes leading up to and the requirements of race day.   I had been a good racer back home and my greatest spur to success was to beat those who had previously beaten me. “

Jamaica: He travelled to Jamaica for the Commonwealth Games in 1966 with Jeff Julian who was the best marathon runner in NZ at the time.   Jeff was a rather negative type being openly negative even three days before the marathon and Mike Ryan picked up on that and other wee quirks and peculiarities.   In the race itself he reckons there was a big gap in ability between Alder and Adcocks and the rest of the field and he ran the race pretty well on his own.   In a small group the one forcing the pace dropped out at halfway and the two others soon dropped off as well.

Fukuoka:   Japan is in the Northern Hemisphere and the race is in the first week in December so many of the runners wear gloves – the temperature is around 8 – 10 degrees.   It is a good fast course, it is appreciated and supported by the local people and the level of competition all make it a good, fast competitive race.

Mike made a point of getting into the heads of his opponents, playing wee mind games with them and as a man more interested in winning than in times, it seems to have been very successful.   But for me it was even more important that he psyched himself up and got the very best out of his abilities.   If you are interested in any of this then Barry Magee had a series of seminars for his runners and at one of them Mike spoke of the mental approach.   You can get access to them via the Wesley AC website at www.wesley.org.nz