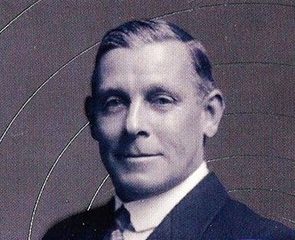 We have noted Maley’s athletics pedigree and the fact that he was a member of the SAAA Committee right up to and beyond the War and being elected President in 1921/22.  We should look equally at the development of Struth the athlete into Struth the Promoter.    As an indication only of the racing done by Struth, the range of distances and his willingness to travel at a time when transport was a bit more difficult than at present, the following prize winning events around the turn of the century are noted.   There were many others.

*First, he was still running right up until he started football training and conditioning as the following result at the end of 1907 shows – he was second in a 220 yards on 1st December 1907 off 17 yards almost immediately before he went to Clyde in 1908.   In 1907 he was 32 years old so it was a long career in athletics terms.

**Second, judging by the results and the handicaps awarded, he was at the very least a very good club standard runner – and maybe a wee bit better than that.   We are told that in 1902 when the great English distance runner Fred Bacon made an attempt on the one hour record on 17th May at Powderhall, his chosen pace-makers were C Thomas, A Patterson and W Struth.    His credentials were impressive both for length of career and standard of performance.

He had been a pro for a long time, and when he went to Clyde they started up their sports agin.   Clyde FC Sports were different from those at most other grounds in that they were professional games and it was natural that his experience be used to assist with the organisation.  H e was the trainer and Alex Maley the manager and they were responsible for one of the biggest professional meetings in Scotland.    In July 1911,  “Almost everybody who is anybody in football was at the Clyde club’s sports on Saturday.  There were Messrs Wilton (Rangers), W Maley (Celtic), H Low (St Mirren), T Moore (Hamilton), M Dunbar (Celtic), J Kelly (Celtic), James Brownlie (Third Lanark) and Herbert Lock (Rangers.)

Two years later and he was getting a name check.   The following is from the Glasgow Herald of 21st July, 1913:

“The Clyde Football Club are apparently “whole hoggers” as far as professionalism is concerned, and in this respect  they are at least consistent.   Instead of running amateur sports, as so many professional clubs do [amateurism in Scotland is practically subsidised at the expense of Association Football] Clyde are running a purely professional gathering on Saturday first.   Of course football is the trump card, but in addition they are introducing Jack Donaldson, the eminent sprinter, and a runner of his impressive accomplishments should attract many to Shawfield on Saturday.   Largely through the influence of Struth, several of the best professionals in Scotland will take part in the proceedings.   Professional running in Glasgow has been pretty low in the water for years, but the Clyde are serving up in an attractive manner on Saturday, and will no doubt be rewarded for their enterprise. ”

A year later and he was at Ibrox and under the influence of Wilton.   He had started with Clyde and professional meetings, then went to Ibrox where he learned from a top notch organiser.   We all need a model when starting out.  eg when Maley started the Celtic Sports at the start of the 1890’s the Rangers events were coming up for 20 years of age and they had learned a lot in that period.  At the period we’re talking about William Wilton was the man and no doubt Maley, intelligent and sharp as he was picked up a few things from him.   Similarly Struth probably learned a lot about sports promotion from under studying Wilton and watching Maley.   When Wilton died in 1820, Struth had been part of the friendly and competitive rivalry for six years.    Like Maley, Struth officiated at meetings – note this extract from the 1914 sports where he was the starter.  Other names to note were Maley as a judge, Sam Mussabini (Harold Abrahams’s coach)as a timekeeper, .A Ross Scott as a timekeeper (a time keeper in 1908 Olympics who officiated at the Halswell 400 metres), Fred Lumley (Proprietor of Powderhall) and of course William Wilton as Clerk of the Course. 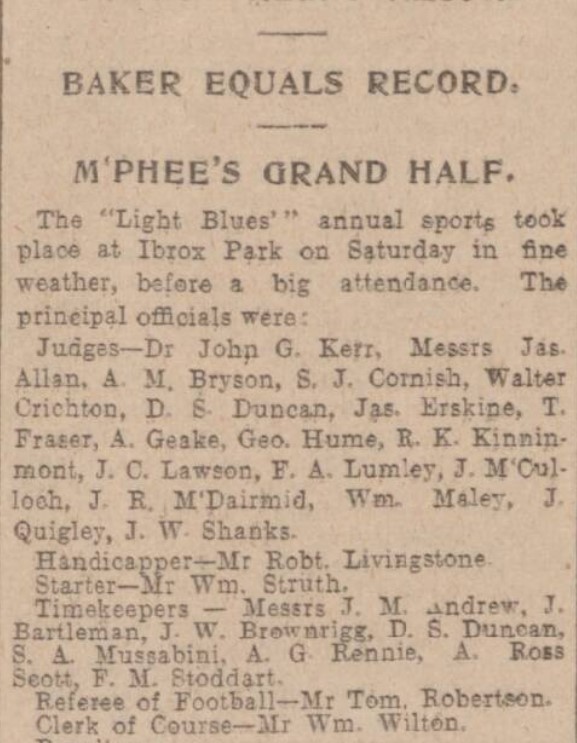 Struth was now in control of the sports and his first meeting was in August, 1920,  a mere two and a half months after the death of Wilton.   How did it go, and how did it compare with the Celtic version a week later?   The two men were at different stages of their careers as managers and as sports promoters.   Struth with a lot of momentum going and in his first big jobs after a superb learning curve, while Maley had been organising meetings since 1890.   In addition Maley was still involved with the Scottish Amateur Athletic Association.  He was Vice President in 1919/20 and President in 1920/21, and Immediate Past President in 1921/22.   I quote:

Maley was of course a fairly senior member of the SAAA by 1918 and after the War at the SAAA AGM in February 1919 he was elected vice president and on to many sub committees.   He was on the Finance Committee (as was Matthew Dickson), on the International Conference group, on the West District Permits Committee, the Handicapping Board of Control and the Reconstruction Committee.    If ever there were a record of his involvement in athletics, it is in this imposing list of responsibilities.

He presided over a meeting in Edinburgh in 1919 to review the recommendations of the Reconstruction Committee referred to above.   There were seven recommendations to be approved:

Other recommendations included (a) the setting up of a organisation with a subscribing membership in each county; (b) the promotion of county championships for track and field, cross country, elementary schools championships, secondary schools championships; (c) to form similar organisations in each county and burgh, rural and urban districts; (d) “believing that prizes of large intrinsic value are prejudicial to true amateurism, the Committee recommends that the limit of value for an individual prize shall be £1”: in this respect I quote from the club’s Committee Meeting Minute of 24/2/20, “Mr McGregor reported that he had attended a meeting of the SAAA and that the motion to increase the prize limit from £7:7:0 to £10:10:0 had been passed unanimously”  (e) a manual for the organisation and management of athletics should be prepared for circulation.”

He was a busy man – it was all good work and they couldn’t have found a better.   His involvement in athletics was as strong as ever. 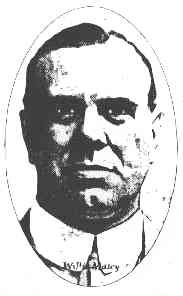 Struth’s first sports in his own right were on the first Saturday, 1920, less than three months after the death of Wilton.   So how did he do, and how did it compare with the Celtic event seven days later?