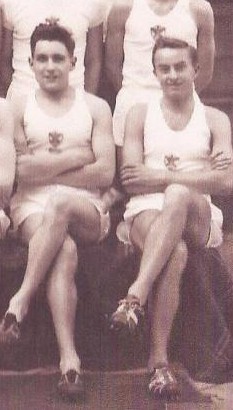 Hunter Watson who has been a grand supporter to the sport since before his University days at Edinburgh in the 1950’s, gave the following information to Colin Youngson along with other documents.    We thought it would be appropriate to print it and link it to the Edinburgh AC page.

Hunter Watson was a distinguished Edinburgh University athlete who became for many years the respected General Secretary of Aberdeen AAC. He was a sports historian and a medallist in the Scottish Championships: second in the 1956 One Mile and third in the 1960 880 yards. Previously in 1954 he became the East Districts Youth Cross Country Champion and later on that year finished second in the Scottish National Youth XC. Even at 40 years of age he remained a fast 800m/1500m runner and won Veteran titles.

In 1953, the year in which I went to Edinburgh University, I joined an Edinburgh club called Edinburgh Eastern Harriers. That club was remarkably similar to the pre-war Shire Harriers in Aberdeen. For example, Edinburgh Eastern was a small club catering only for senior men. Also it had a clubhouse of which it had exclusive use. That consisted of a fairly dilapidated terraced house in the Dumbiedykes area of Edinburgh. It was in that building that we had our General and committee meetings (I was elected to the club committee in 1956). The building was a convenient base for going runs in Holyrood Park though that did not happen often. Our winter programme consisted of interclub runs from various venues and competitions consisting of confined club competitions for club trophies, Eastern District League meetings, the Edinburgh to Glasgow road relay, the Eastern District relays and the National Cross Country Championships.

Although it did not occur to me that there should be events for younger age groups in the Eastern District Cross Country League, I was one of those of the opinion that Edinburgh Eastern Harriers should amalgamate with one or more of the other Harrier clubs in Edinburgh. I did not particularly push this proposal but there had been no need for me to do so since others were of the same opinion: senior committee members of three of the Edinburgh Harrier clubs had been discussing the possibility of amalgamation.

On 27 March, 1961, in the fine clubhouse of Edinburgh Northern Harriers in Greenside Place, Edinburgh, there was a joint general meeting of members of the following clubs:

A proposal to “amalgamate all resources, financial and otherwise, … in a new club to be called the EDINBURGH ATHLETIC CLUB …” was unanimously agreed by those present.

A committee for the new club was elected. I was elected unopposed as the cross country captain of that new club which catered for youngsters but which still seemed to lack a ladies section. It is noticeable that in the early membership cards of Edinburgh Athletic Club, it is stated that the club is affiliated to the S.A.A.A. and the N.C.C.U. but that it is not stated that it is affiliated to the corresponding women’s organisations.

In August 1965 I came to Aberdeen to take up a post of a lecturer in mathematics at the Aberdeen College of Education. Soon thereafter I joined Aberdeen AAC.

At the AGM of Aberdeen AAC, which was held in the YMCA building in Union Street on 14 October 1966, I was elected to the club committee. At the AGM which was held the following year on 6 October 1967 in the same venue, I was again elected to the committee. However, as the year progressed I became disenchanted with the way in which committee business was conducted and, as a consequence, I resigned from the committee.

By 1974 my elder son, Billy, was showing an interest in athletics. That led to me organising a few events for youngsters at Linksfield Stadium where the club trained. On two occasions I also, without club support, took youngsters to compete in events at some distance from Aberdeen. Their performances were such that it seemed obvious that much could be gained by establishing a Young Athletes Section within Aberdeen AAC. The club secretary gave me the go ahead provided that this section could be self-financing. On that basis I took the necessary steps to establish a Young Athletes Section. Parents were willing to assist me as were two senior members of the club.

On behalf of Aberdeen AAC, I applied to join the Scottish Young Athletes League. My application was accepted and, to the surprise of some clubs in the League, Aberdeen AAC won the North East Section and finished third in the League Final.

At a well-attended AGM, which was held in Harlaw Academy on 17 October 1975, I was elected club secretary. I served as in that position for twenty years but stepped down shortly before my sixtieth birthday at the 1995 AGM. I had gained great satisfaction as a consequence of carrying out my secretarial duties, not least because during that period Aberdeen AAC had become by far Scotland’s largest club. I am delighted that the club has continued to flourish since I stepped down as secretary.

p.s. The cross country regulations of the Aberdeen YMCA Harriers (founded 1912) stipulated that a Pace-maker and a Whip shall be appointed for the control of each pack and, further “That no one, when out for a run, shall be allowed to go ahead of the Pace-maker, unless the run be a racing one, or the signal be given by the Pace-maker for a race home”. (When I joined Edinburgh Eastern Harriers in 1953 that club had no such regulation relating to cross country running. However, at the opening run of each season the various Edinburgh Harrier clubs once met together at the Portobello Baths and the runners divided themselves into a fast and a slow pack, each under the control of a Pace-maker and a Whip. Each year towards the end of the run, members of the fast pack were lined up on the promenade at Portobello and then raced the final half mile or so to the baths where we enjoyed a pleasant swim. The fields over which we ran then are now built up. The same, obviously, is true of many of the fields in which cross country events once took place in Aberdeen. As for the use of Pace-makers and Whips, I doubt whether this would now be appropriate for confined club runs but believe that there could still be a place for them in inter-club runs. It is my opinion that not every inter-club event need be of a competitive nature.)”

Many interesting observations on athletics generally as well as on the particular topics of Edinburgh AC and Aberdeen AAC from Hunter whom we thank for the information.