Some thoughts on the handicapping system …   Probably more to come on this one. 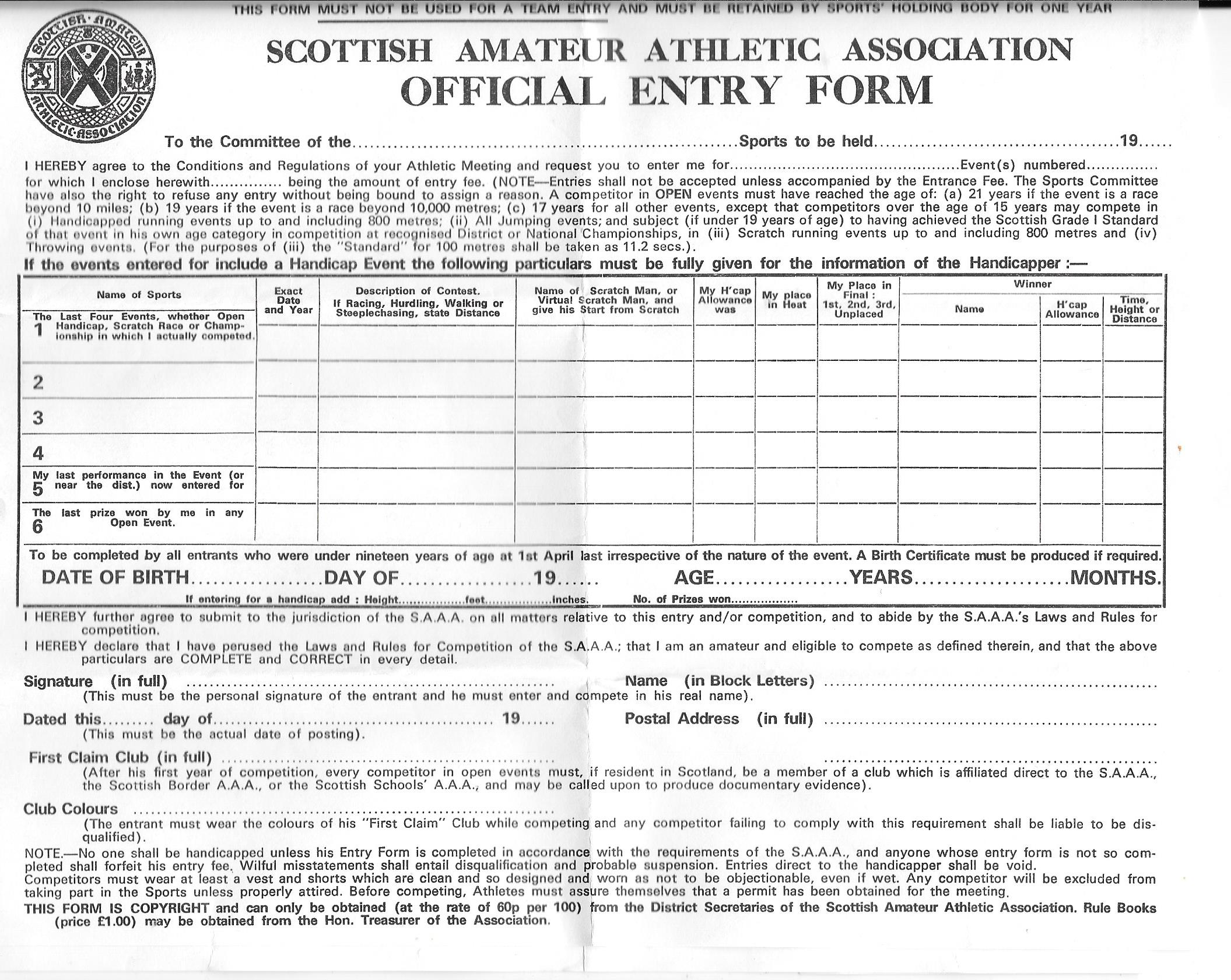 The form above will be very well known to generations of athletes who ran in handicap races at open meetings or highland gatherings.   I must have completed hundreds of these – for Babcock Sports, Dirrans Sports, Singers Sports or the many highland games that were amateur events (Strathallan, Bute, Cowal, Shotts, Dunblane, Kinlochleven .. ).   The form was the same, the handicappers were the same  and the penalties were arranged by SAAA rules.

Professional Highland Gatherings, Border Games and other similar sports meetings usually operate a system of handicaps.  At one time all races, amateur and professional alike, other than championship or some challenge races, were handicapped: as the Glasgow Herald remarked in August, 1889 when reporting on a race that had featured Robert Mitchell, “Mitchell should bear in mind that handicaps were instituted for two main purposes – firstly to give all a chance, and secondly, to make good men accomplish good time.”    Handicaps were often set up to set records by ‘drawing out’ the top men by giving them hares to chase.   They even had marker pegs beyond the finish line so that handicapped men could get times for the complete distance by running on past the finish line.

When I started road running in the 1950’s, the handicaps were by time: the novice mark was 30 seconds a mile.   If you were unplaced in the handicap you got a lift for the next race, if you won or were placed in either the scratch race or the handicap race, you were penalised.    The difference between the Amateur and the professional was that the for former, the handicaps had a national standardisation while for the latter there was no country wide standardisation.   The SAAA rules for competition as published annually in the handbook set out the penalties.   Those below are from the 1980 version. 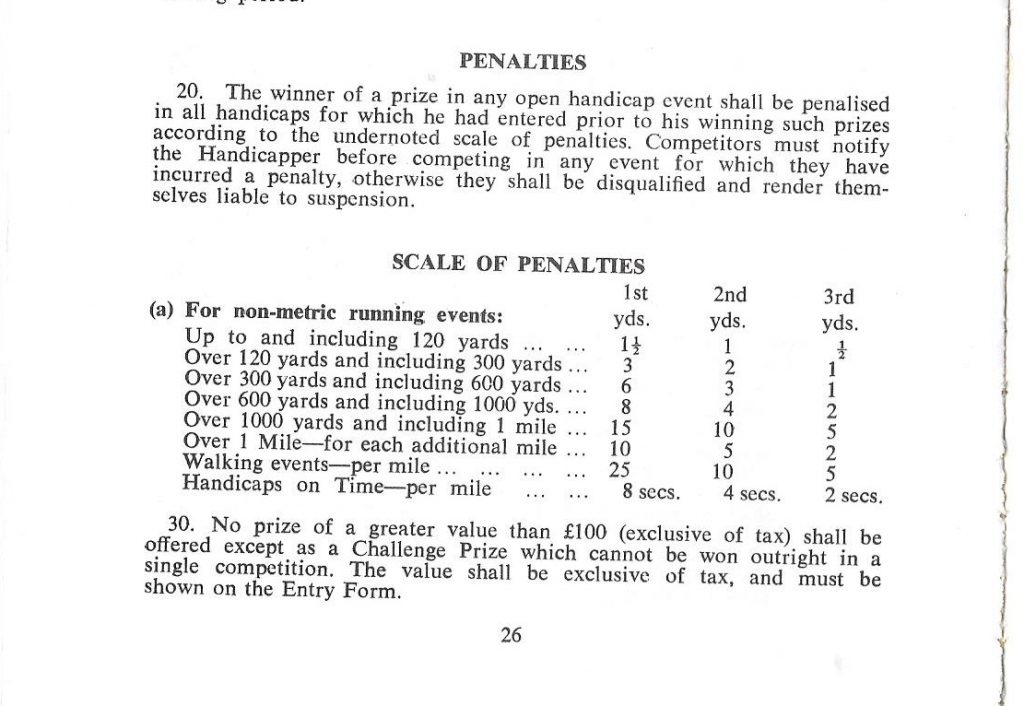 The handicaps were set for each meeting by nationally qualified officials – in my day they were Alex Nangle and R McNeillie, and later Jack Brown.

The professional scene was not really a national one.   There were recognised handicappers but they apparently did not operate alone.   Note the following posted by Shane Fenton on the ‘Memiours of Pro Athletics’ Facebook page:

The above came from a 1981 newsletter so it was roughly contemporaneous with the SAAA snippet above.   This elicited several interesting comments like this one:

“I remember when we got together with the handicappers to try and standardise handicaps to eliminate the discrepancies with each handicapper as it was always the biggest complaint amongst athletes. We also introduced a ‘Novice’ handicap system to help protect our members from unknown athletes declaring false information in order to gain a good handicap. I seem to remember new athletes being allocated a mark of 6m in the 110m sprint events. 60m in the 1600m and 30 in the 800m ( I’m not 100% certain for the middle distance events).”

A later comment was that this group was short lived and although it did introduce several changes – registration of athletes, coloured bibs, etc – the national handicapping scheme did not come about.    It would have been a step forward had it done so. 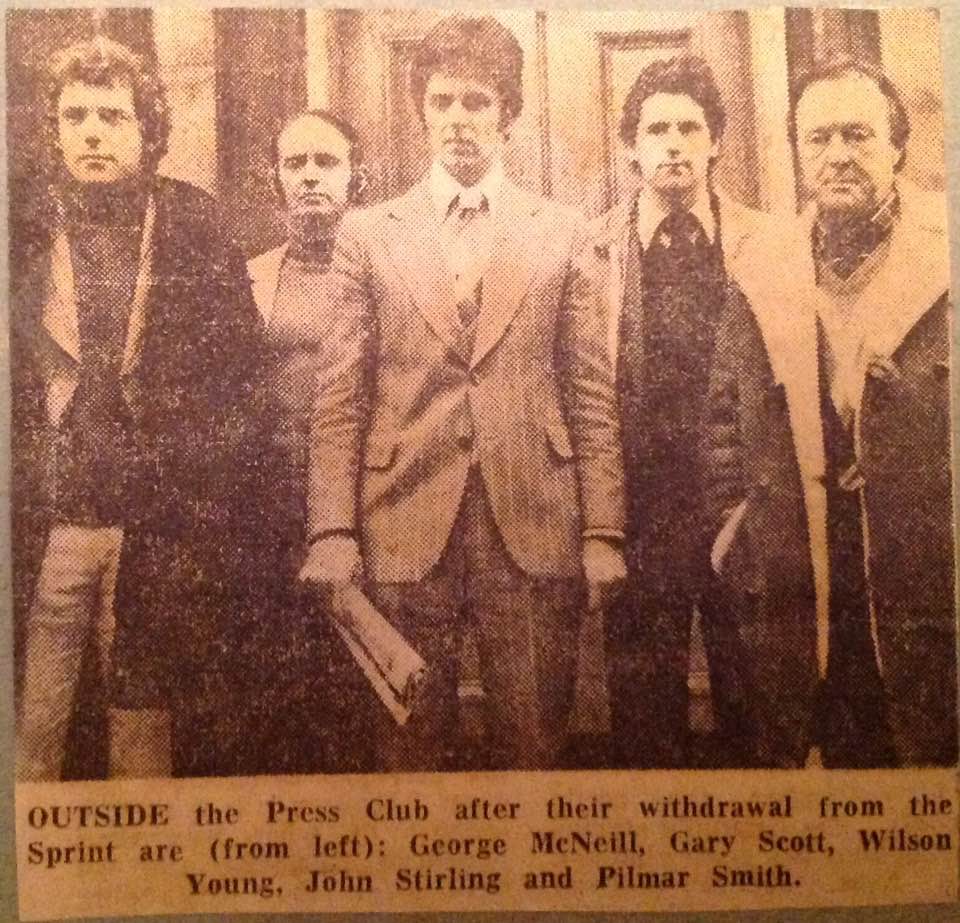 The above cutting is from the same Facebook page and shows Coach Wilson Young with his top four athletes.   The explanation?

“The issue was that one of Wilson Young’s athletes did not get the mark he was looking for so he withdrew all his athletes.”

The key phrase to me from the caption is ‘did not get the mark he was looking for.’   All athletes tried to shape the handicap system to suit their purposes.   There is the story of the young amateur female athlete who was coached by her ex-pro father.   He kept telling her not to win this week, then at a biggish meeting said that she should win but not by much.   She just felt so good, she said, that she ran away from everyone and won by a distance.   As she walked away after the race, the handicapper stopped her and just said, “You’ll no do that to me again, lassie!”   Many amateurs gradually built up their handicap on the approach to the Cowal Games which had many of the same events on the Friday evening and the Saturday.   They could then run in two separate 880 yards and/or mile handicap races with the same good handicap and maximise their chance of winning up to four prizes without being ‘pulled’.

In short, the difference between the two codes was that there was no national professional set of rules for framing the handicaps for any athlete and there was always a local input to the handicapping.   A protest such as the one referred to above would have been pointless in the amateur ranks.