My two memories spanning the first two domestic Commonwealth Games are maybe not what might be expected.   The first in 1970 was not really part of the Games, the second was more a jumble of incidents or happenings.   Let’s have a look at the first.

In the late 1960’s and early 1970’s I was running all sorts of distances but mainly concentrating on road running and was a member of Clydesdale Harriers and of the Scottish Marathon Club.   The build up to the Games really started when the club committee received a bulky envelope which contained many items regarding the upcoming festival of athletics.   eg there was a map of the stadium, a time table for the athletic events and prices of tickets for the various areas and days, and a form on which the club would submit how many tickets were required and for what days and parts of the Stadium.    A good way of selling the tickets – the people who took part in the sport and supported it all  year round, year in and year out, could get tickets for their events.   The club President at the time was David Bowman who was second in command as far as the marathon was concerned and he was anxious to get as many stewards as he could for the race, Jimmy Scott, secretary of the SMC had the same concerns and the result was that there were many members of both clubs on duty.   The race the year before the Games was the rehearsal.

For that I was in a refreshments team at Fisher Row, Musselburgh.   The timekeeper who was to be on duty at the halfway mark went out on the bus containing the stewards who were to be dropped off at the appropriate points.  The bus left before the race started.  He, the timekeeper, was to get off the bus at a particular telephone box, phone the stadium and listen to the starter over the phone so that he could start the watch at the right time.   Traffic from Jock’s Lodge was horrific, the bus was creeping and stopping as far as the first drop off point.   Race time was approaching and we were all telling the timekeeper to get off at the next telephone box and phone.   He refused, he had his instructions as to where ‘his’ phone box was.   He was clearly going to miss the start.   Then someone at the front of the bus saw a red box at the side of the road.   Bus driver told to stop.   The protesting timekeeper was manhandled off the bus and pretty well made to make the call.   He did – and just in time to start his watch!   The day was saved.

The next stramash was as the runners were coming through.   We were in a refreshment station for the returning runners.   Across the road (almost) was a sponging point.   When the leader came through – he’ll remain nameless for now – a car came to a halt just past the table on the other side of the road and one of his clubmates got out and handed him a bottle containing his drink.   Illegal.   Unchecked drinks could not be taken, and legel ones only at water points.   Immediately the chief steward at our point announced that he was going to inform headquarters.    Arguments ensued which were eventually dropped when the returning runners were looking for their cups of water, orange juice or whatever they had brought with them.   No protest went in.

It was a frantic afternoon in Musselburgh.   Not strictly, not at all in fact, part of the Games where Lachie was the hero, where although McCafferty did not catch Stewart in the finishing straight, I still think when I see it on video that “this time he’s going to do it!.    I learned a lot at that rehearsal – and on the real race day, it went like clockwork. 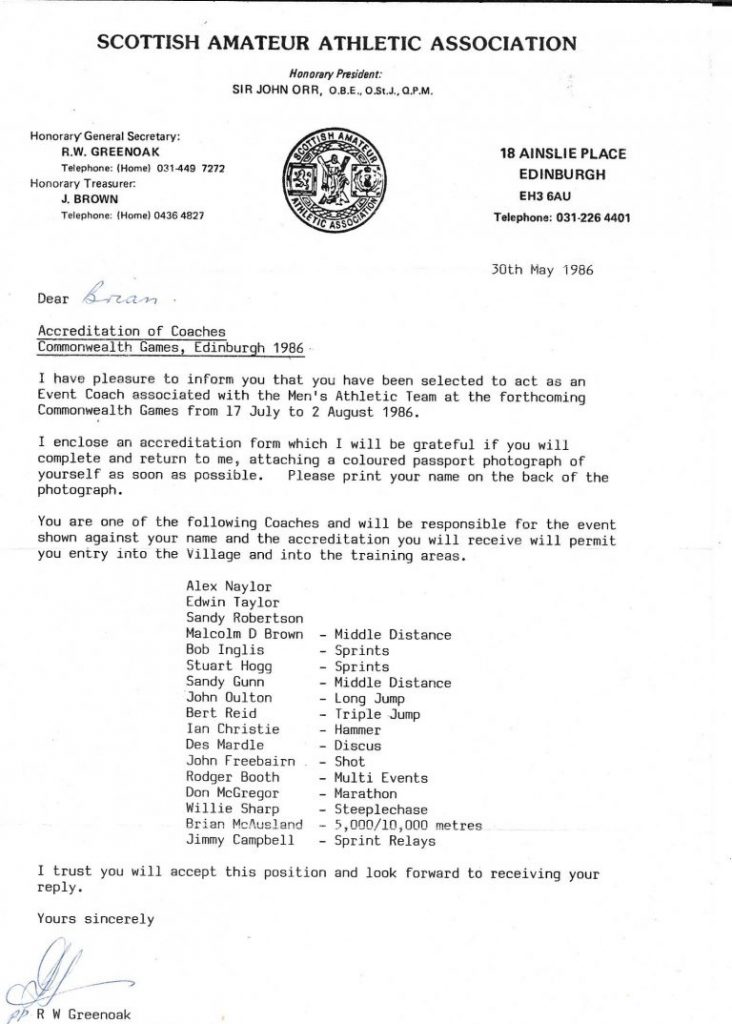 If you look at the letter above, you’ll see why the 1986 Games were special to me.   I had been appointed Scottish Staff Coach for 5000/10000m earlier in 1986 and here I was as an accredited coach along side superb coaches like Jimmy Campbell, Iain Robertson, Stuart Hogg, John Freebairn, Des Mardle, Don Macgregor ….   It gave me access to buildings and to people and added tremendously to the experience of another Scottish Games.    Like many another I had some reservations about the selections, and about some non-selections such as Adrian Callan but there are two things that really pointed up the fact that even international athletes are human beings.   There was the point at which the closing ceremony broke up and the teams from the various countries mixed together and marched, skipped, danced their way round the areena and who can forget the image of the hige Welshman on the tricycle pedalling up the home straight surrounded by exultant athletes?

The other moment came at the start of the women’s marathon.   I was a friend of Cyril O’Boyle and we’d run hundreds, maube thousands of miles together.   His daughter Moira was running for Ireland and before the runeers came out on to the track I was standing in front of the runners seating when Moira came through from the watrm-up track.   “Brian, have you seen my Dad?”   I hadn’t and she asked if I could find him and get him to eat something!    He’d had nothing to eat or drink since he’d got up and she was worried about him.   About to start a marathon at a major Games, and her worry was for her father not having eaten that morning.   He was probably more nervous than she was about the race and how she’d perform! 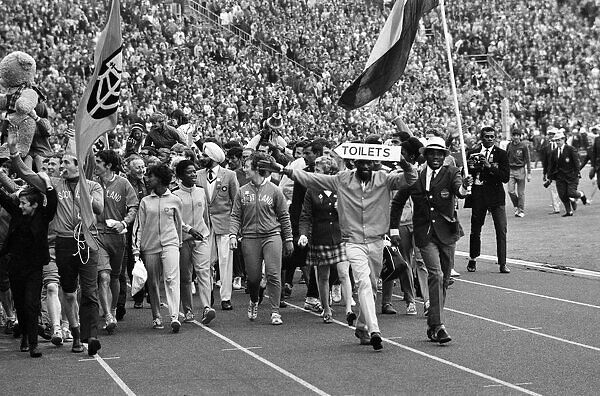